Dancing on tables for Black Dice 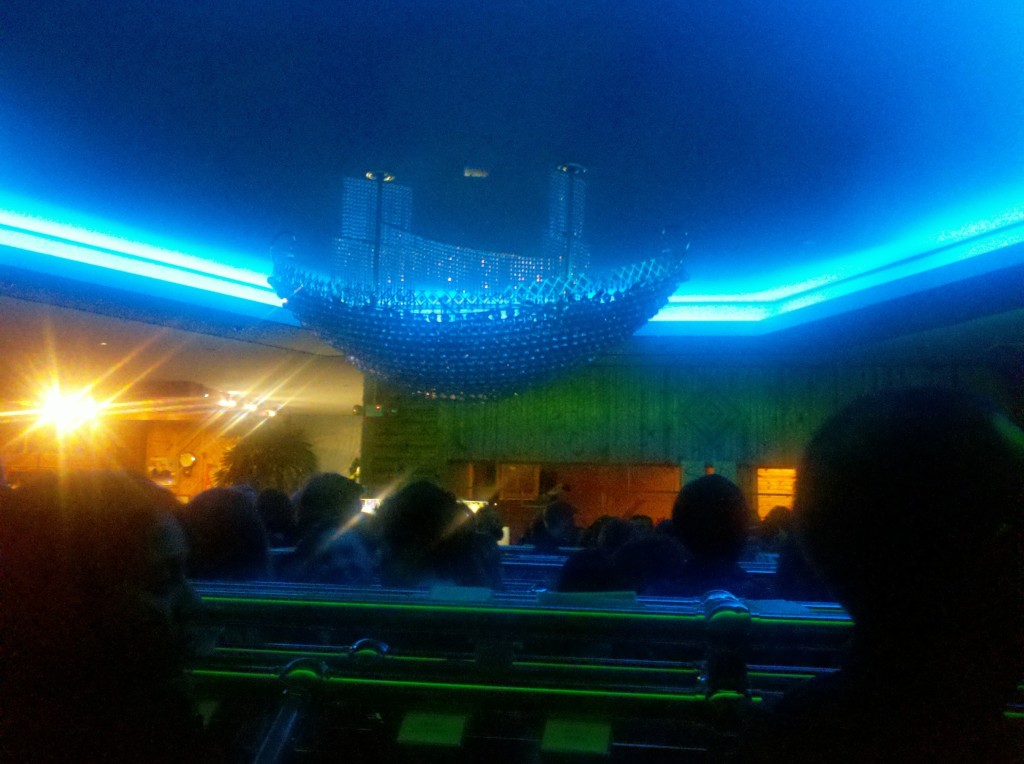 (The unsung thrill in writing a nightlife blog on a web site your friend is the managing editor of begins when you check into fancy events at their press table, which has the shortest line, for an enveloped ticket traditionally reserved for alums of Columbia's journalism school in severe glasses and beautiful wedges; I want your shoes, but for now, at least I can have your life.)
When you go to the Hayden with your little cousin and you're trying to hold his hand behind schools of 8-year-olds, you're remiss to notice the elegant white marble of the main hall. You don't look up and marvel at how you can't see the ceiling because there's a 3848.45100064sq ft orb (science!) hovering above you, or the bulbs resembling Earth and Mars dangling beside it. But when you're welcomed by an open bar of top-shelf cosmic cocktails and a shiny mini-stage, and then secure a table-clothed table for four at which to enjoy six different cheeses with your friends, the high-end architectural aspects begin to sink in. Kunal Gupta, my best friend in Babycastles, is temporarily living in Denmark and flew back for one night to witness this incredible fitness. A staircase is raveled around the dome, and after a brief anouncement the band One Ring Zero descended the stairs, dressed in Tyvek and space helmets.
If you told the elevator guards that you were in the staff, they would let you take drinks on the elevator. The elevator led to a glass appendage that jutted into the dome; this is the part where you would run.

(photo by Alex Reside, lifted from Facebook)
The silhouettes of hundreds of people came into view, scaped by renaissance man Greg Fox's intergalactic synth jams; his music was complimented by a room of “oooo”s, “aaaah”s, and “look behind you!”s. Since the initial test of the Babycastles' incredible, six-person videogame “Space Cruiser” (which Ari and I previewed earlier), more detailed effects were added to the different galaxies, and more planets hovering nearby. After a few moments the party shuttle reached a worm hole, and the ship was transported through space and time, via a tie-dyed umbilical chord. The dome erupted in cheering and golf claps.

(photo by Alex Reside, lifted from Facebook)
In the last moments of the game before the lights came on, I took control of the helm that allows you to control the view of the spacecraft (and of everyone in the dome). I turned it all the way to the left and looked up. Space Cruiser's designer and projected-effect pioneer Ivan Safrin's view of the galaxy, in responding to my touch, surged my brain with space euphoria. “My heart,” I uttered to myself.

(photo by Alex Reside, lifted from Facebook)
Free-for-all drinking, glass elevators, dresses, entertainment – at a certain point I looked down on the Tyvek band (from the elevator), and they were still playing theramin-pop but a lot of them had shed their space helmets, and two of the women in the band were just dancing in the middle of the hall and smiling with a dorky gusto, and I realized that all of these things added up to the feeling of being on an actual cruise. And if I had to pinpoint where the cruise was headed, I'd have to say Bermuda. (Just kidding, I'd say space.)
Rating: 5 cosmic cocktails

The K&K Super Buffet has three aisles of chinese food – beef with broccoli, pork dumplings, pink crabs, “saunteed squid”, and shrimp wrapped in bacon, all bathed in steam. A fourth, cold smörgåsbord has lettuce, dressings, different-colored jellos, and whipped chocolate pudding. A big red sign reads, “DO NOT WASTE FOOD. TAKE ONLY WHAT YOU CAN CONSUME.” And above it all hangs an enourmous, crystal Spanish Galleon chandelier.

At 9:30 their food was still out and the employees walked around, mixing the contents of the table pans and refreshing stacks of white plates. Patrons ate in a dining section and theorized why men were putting the finishing touches on a wooden stage on the other side of the room, wondering aloud about the single-file line that had formed just outside the buffet's windows, and why it stretched the perimeter of the parking lot.

(Devin from DIVE enjoying a pastry in the year of the dragon.)
Show staffers, bands, and friends circled, picking at food or making a plate (shrimp wrapped in bacon can be eaten whole, including tail). Then the neighborhood squares were ushered out. The food was taken away and replaced by three bars staffed with pretty girls. All the lights were lowered except the Spanish Galleon, which emitted a dreamy blue-green glow.
Ticketholders were welcomed inside, removing their beanies and holding them to their chests in awe of the entranceway's koi pond (sans koi), cherry wood walls, and powered-down claw machine stocked with plushies.
Dog Leather played on the floor in the middle of the audience corral. The bodies around them created a wave of black hoodies, and Dog Dick's gyrating head would emerge from it with a microphone pressed to his mustache, his signature vibrato surrounding everything. Griffin broke it down and humped the floor. They did Sewn Leather's hit, “Smoke of the Pvnk,” and as people shoved each other you could read their lips: “When I smoke weed, the weed smokes me!”

(photo by Laura Jane Kirsch for the Village Voice blog)
The Babies were really cute. They were all dressed like they had been gardening earlier in the day. But they used to break the law! The crowd's blood-alcohol level was already up, and people started climbing onto the stage and then leaping off. Joe Ahearn, who crowd-surfed during their set, recounted: “I kept trying to take sips of whiskey from my pocket while crowdsurfing, but the hands that held me up kept whirling me around.”

(photo from fuckingnostalgic's flickr stream)
Between bands, people were leaning on the buffet's steam covers, hitting on each other or making out. It was so crowded that if you were talking to someone and then left to get a drink, you'd never find them again. All the people you never see anymore because they have a girlfriend or moved to Greenpoint or got famous were at K&K, and once you felt sufficiently caught up with them, it was totally comfortable to wander away. While the legendary Black Dice were playing their lively, unpredictable power-trance, a kid from my high school started to complain: “I'm sorry, but this sucks”; and I easily slipped away to the bar, where Greem and Zoe were standing on table of their beer station, rolling their hips and holding their arms in the air.
“Arena Billiards” above K&K was offered up as a second restroom. It was tremendous (maybe 25 pool tables) and lit with white-and-purple florescents. None of the pool sharks understood how anyone could be “seeing real estate” in the middle of the night.
Real Estate were playing their late-summer wedding music, and I started thinking about getting a six-piece chicken nuggets and taking a shower. They picked up the tempo and the audience started shoving each other again, but once I put my coat on I knew I'd have to say, “Tao chi” until the next big Todd P super buffet. But I'll always remember that set as the only time I've seen a crowd mosh to Real Estate.
Rating: 5 weed leaves

Want Impose to check out your party? Email cruisecorp@imposemagazine.com and we'll stop by!
PrevPreviousA Gathering of Tomes
NextWin over 100 of the best releases of 2011Next