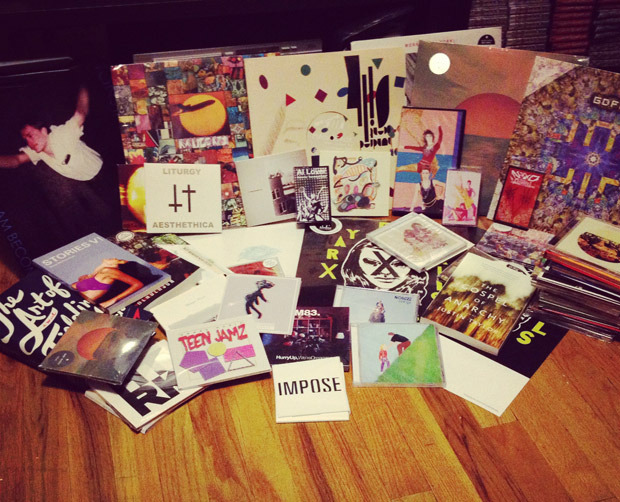 Once again, it's our valiant effort to keep the physical format alive just long enough for us to run these contests, thus boosting our January traffic numbers!

Perhaps you remember the best music contest ever part I and part II, when we took on the stupidly huge project of gathering up a release from each of the artists and bands we decided were the “greatest” of 2009 and 2010, only to give them all away to one lucky asshole. Last year, some guy in Los Angeles got a box full of roughly 100 records, CDs, books and tapes. The year before it was someone in Staten Island.

This year it could be you! From our extensive selections below, we'll be giving away somewhere in the ballpark of 100 releases. And in the truest act of sensationalism (and Highlanderism), there can only be one (winner).

Simple, just like us on Facebook or follow us on Twitter. If you're already doing both, then we love you. But you can also enter by simply retweeting this (http://twitter.com/IMPOSE/status/153896031828983808) and make sure to include ‪@impose. This way we'll see it and put your name in one of those bingo cages.*‬

‪* We will accept all Facebook and Twitter additions between January 1-31, 2012. We only accept one entry per Facebook or Twitter address. We're not simpletons: we will spot your fake accounts made solely for this contest. The contest will run until 11:59pm on Tuesday, Jan 31, 2012. One winner will be randomly chosen by 12pm noon on February 1, 2012 and announced on this page on Friday, February 3, 2012.‬

Check out the goods here: