More than a cracker: an interview with Jonwayne 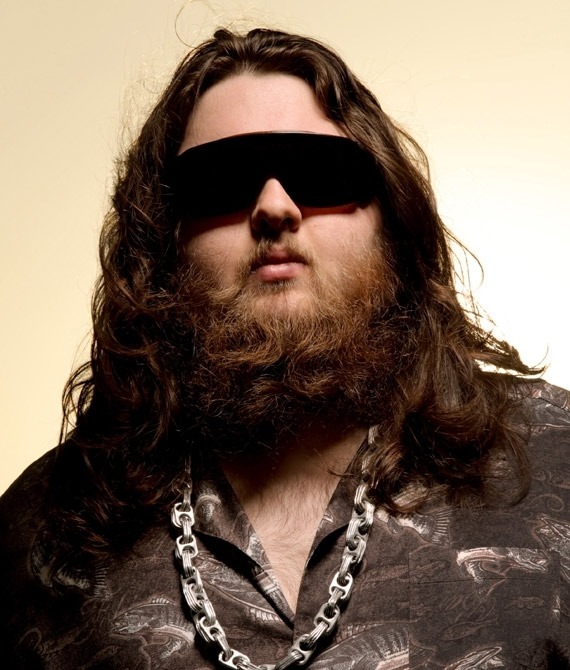 Jonwayne is mid-answer to a question regarding the completion of Rap Album One when he interrupts himself.

“Have you heard the record?” I know where this going. It’s an interaction I often dread, since it alters our roles in the interview. I’m on the interviewer end for a reason—I’m terrible at expressing my opinion in the moment. Jonwayne is a rapper, so by trade he’s equipped himself with the art of freestyle.

I stutter and offer complimentary platitudes to each critical observation.

“Rap Album One feels like a debut, though that’s not to suggest it’s rookie.”
“There’s an understanding that you're aware it’s a debut, but it’s not a collection of singles.”
“It’s challenging, but not to a fault.”

Finally, I shift the conversation with, “You’re giving people a lot to digest without overfilling them, which is amusing because you have that saltine album cover.”

On the other end of the phone Jonwayne mumbles “fucking Jeff, man,” and we move to Stones Throw graphic designer Jeff Jank’s clever and distinct artwork for Rap Album One—a close-up of a cracker that induces salivation.

In the year since signing to Stones Throw, Los Angeles rapper/producer Jonwayne elevated his status with three choicely designed cassette tapes. Bluntly titled Cassette, the tapes were demo collections churned out by Jonwayne while he prepared his official debut. They were distinctly lo-fi, but the designs eclipsed the content. Jank's artistic wit hoisted the series into the realm of collector’s items. Thanks to Jank and his label, cassette tape dimensions are conjoined to those of Marlboro cigarette packaging (a move that earned Stones Throw a cease & desist letter from Big Tobacco) and an “analog iPod” exists.

“I trust him,” Jonwayne says of Jank, “The biggest aspect of our relationship artistically is trust. I trust his vision because he gets me. He understands where I’m coming from and lets you know that through the art he makes for your releases.”

Before Jank conceived the indelible artwork for Rap Album One, the intent to craft a profound debut was alive in Jonwayne’s studio sessions. Since his days in the Low End Theory scene, he’s mostly kept his rapper side caged. Pre-Stones Throw releases include instrumental albums Bowser and Death Of Andrew EP on Alpha Pup, while the mega-beattape release of Oodles of Doodles, three months after signing to Stones Throw, is largely overlooked due to the fascination with the Cassette series. Rap Album One is made with the intent to balance Jonwayne's identities and be known among the sterling company of labelmates like Homeboy Sandman, Strong Arm Steady, and MF Doom. Due to his longstanding focus on instrumental records, it was a transition that nearly crippled his process.

“I think what happened was I was doing the instrumental thing and I was going through transformations mentally,” he says. “When it came time for me to get back in the studio and make more vocal rap shit, I kinda lost it. It wasn’t there. I didn’t know if it was temporary writer’s block or if I had blocked that part of myself out completely.”

Jonwayne views the Cassette series as a biproduct of his stressed creative process. In making Rap Album One, he went through five bursts in creativity, overcoming the relearning stages of rapping, and developing his impulse to “say something with the record” into a cohesive collection of testimonials. Perhaps that’s why the overture “After The Calm” sounds like Chicken Little anticipating the skyfall. Its ominous production of Carpenter-esque synths and cold veined piano line resist a swell of psychedelia. He had to destroy preconceptions in order to build anew.

“The first few months were soul searching and trial and error,” he says. “The album was basically me working through that. This took almost a year to make because I had to work through things that were beyond my control.”

He pushed through the complications, recording the debut in a studio within the Stones Throw offices. Developing a uniform sound was therapeutic for Jonwayne. He described 2012 as a rough year, the lowest point being his grandparents passing within a 48-hour span, but in the lows, he obtained closure. It’s never addressed autobiographically on Rap Album One, but latent in his lyrics that ritually hinge to issues of mortality. On the chorus to “Find Me In The Future” he raps, “they don’t know where I’m at / I’m living every day like yesterday was my last / this undead kid will live forever and then some / find me in the future / you can live in the past.”

I have never known a rapper to challenge Jonwayne’s presence in the genre, but the debut is made with valiant opposition to shadowy naysayers. The irony of the album art is a preemptive strike, in which Jonwayne has defused any and all white rapper punchlines. He’s garnished his debut with a salty disposition that suggests a chip on his shoulder, despite it being a competition largely against himself. He’s taken great risks on his debut, pushed himself toward a developed sound beyond beattape sketches, and earned the right to feel nervous about the public’s perception. I could not fault Jonwayne for asking my opinion in early October. It would be weeks before he might have another chance to gather feedback to a record that’s been done since January of this year.

“I was expecting it would be nervewracking,” he says. “Part of me is afraid of putting myself out there fully. I think all artists deal with that. It’s the Axl Rose effect.”

The day has arrived and reviews will trickle in, some critical, others condensed to 140 characters. Jonwayne will find out if his stress rap debut translates or if the risks taken, the mutated compositions and mini-movements in eleven tracks bog down the listening experience. I think back to my intial assessment, “a lot to digest without overfilling,” and in the past month, that critique has held up. It reminds me of one of Jonwayne's more poignant comments in our interview:

“It’s okay to be challenging and off the cuff with your music as long as it’s not overbearing. I want people to complain about what’s not there, rather than what’s there.”

It's the day before deadline and Jonwayne has recorded nearly two albums worth of material that must be edited down to just eleven songs. He’s had sessions with Peanut Butter Wolf, who acted as executive producer and helped Jonwayne arrange the tracklisting. The album is not done. The tracks are in order, but it has no ending, and he's working with some serious Axl Rose problems, hesitant to put the record out without a proper epilogue. After some tinkering with a Rhodes piano, though, he’s produced the framework for “Sandals”. For all that frustration and mortal anxiety compacted in the 38 minutes of Rap Album One, despite the time crunch in which it was conceived, Jonwayne approaches “Sandals” with triumph and catharsis. The man who sang “falling deeper in a hallucination” on the opener is at ease on “Sandals” with nothing left to say but “sometimes I feel so good.”

Jonwayne's Rap Album One is out now on Stones Throw.