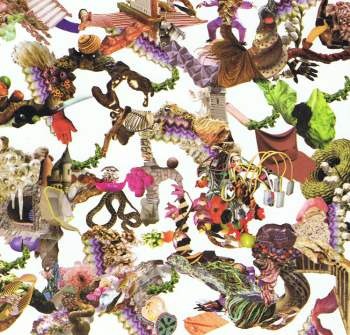 Kemialliset Ystavat have been one of the most hard to pin down acts in experimental music over the last decade. You can kind of get an idea of what you’re going to hear before their albums drop, but you never really know what kind of scope and approach it’s going to take on. Kemialliset Ystavat always consists of Jan Anderzen, but could include other musicians, could be solo, or could include guests such as Sun Ra or Karlheinz Stockhausen through samples. His cover art is also some of the best in the biz, with an overstuffed, brilliant, “Garden of Earthly Delights” kind of vibe. In any event, the project remains one of the most exciting psychedelic listenings from a richly talented Scandavian scene, and throughout the world, really. After releasing his last full length in 2007 (also very atypical for experimental artists) more than a few people were ramped up for this new offering.

And if you’ve read a review before this one, bewilderment is the most likely sense you’ll find. The samples are there, the electronic elements are there and the folk elements are there, but in no way is any of it easy to get a hold of or wrap your head around. In a genre where compositions or improvs usually take place over a longer period of time, letting texture and depth take over for melody, Ullakkopalo manages to create such depth and texture in much, much shorter compositions through the use of intense layering and challenging the concepts of melody in experimental music. The tracks on this album do have an ADHD type quality to them, with just the sheer number of layers and quick segues between themes. However, the focus is apparent in how a seemingly over-saturated track tends to make perfect sense or how a segue flawlessly transitions the mood of a song.

The album itself is also very cohesive as a whole, even if the songs tend to be schizophrenic at points. It slowly builds through the first few tracks until it hits its peak on the sixth track (I’m not going to bother trying to type out all these Finnish words) and slowly ebbs out. The peaks are just moments of aural beauty, made possible through the slow build of tension, while the ending seems to have elements of free noise improv, kind of spacing out in austere surrealness. Anderzen is adept at creating music that is as visual as it is sonic, lending to the idea of a theme that persists from one end of the album to another. Again he shows his talent and master attention to detail by creating an album that could be frantic at any second, but as a whole is a unified vision. In a style of music where albums are typically a collection of tracks, this is a welcome breath of fresh air.

So far I’ve listened to Ullakkopalo a few times and have felt a range of emotions in doing so. I am discovering new things and being challenged more with each listen. While it is too early to give it a final “grade”, it is always engrossing and interesting. I find the best albums are always ones that you need to spend a lot of time with to really appreciate their brilliance. I look forward to finding out if Ullakkopalo is going to reach that level of brilliance.