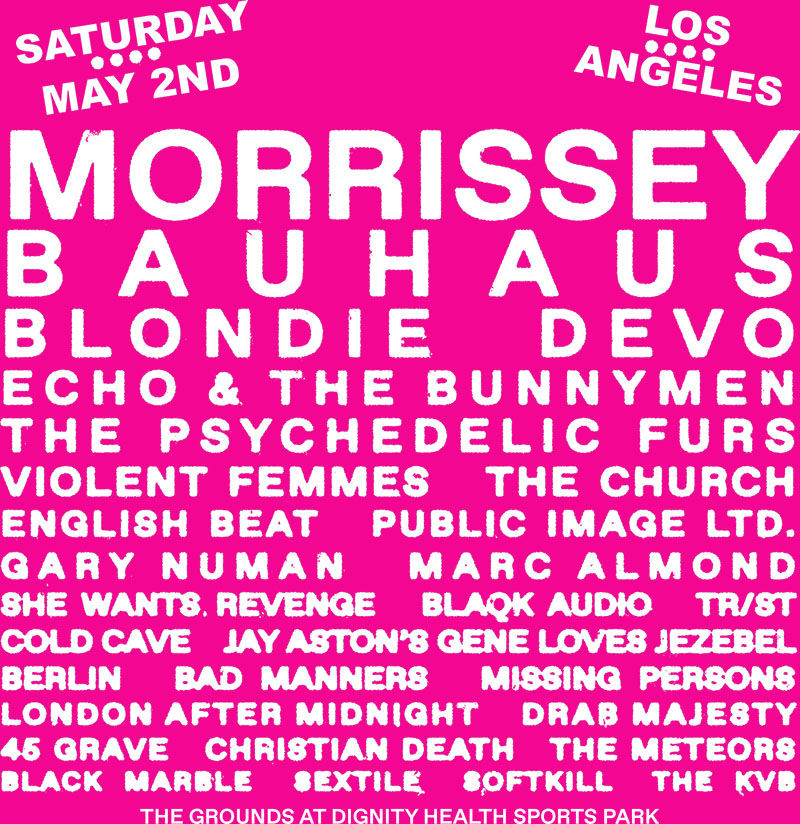 Get ready to bust out that mascara! Morrissey, Bauhaus, Blondie and Devo are set to headline Goldenvoice’s inaugural goth and new wave-themed nostalgia festival Cruel World, going down Saturday May 2 at Dignity Health Sports Park in Carson.

The recently-reunited Bauhaus are widely regarded as the godfathers of the goth movement. The band formed in 1978 in Northampton, England, and rose to prominence thanks to their dark, unnerving brand of post-punk. Their breakout hit “Bela Lugosi’s Dead” remains their magnum opus – a skeletal nine-minute epic that laid the groundwork for the entire genre. Together they released four full-length albums, including their iconic 1980 debut In A Flat Field, before breaking up in 1983. Frontman Peter Murphy would go on to carve out a successful solo career, while remaining members David Ash, Kevin Haskins and David J re-convened as Love & Rockets. Bauhaus reunited in 2005 before breaking up again three years later. Their performance is probably the most anticipated one of the fest.

One of the most prolific artists of his era, Morrissey toplines Cruel World. The former Smiths frontman has maintained enormous popularity despite his recent polarizing political views. A fan-favorite in Los Angeles, expect another typically spirited, theatrical appearance from Moz.

The rest of the lineup is peppered with some of the most legendary names in new wave, post-punk and goth music history. That includes the aforementioned Blondie and Devo as well The Psychedelic Furs, Echo & The Bunnymen, Violent Femmes, The Church, English Beat, Public Image Ltd., Gary Numan, and Christian Death.

There’s also a number of smaller, more modern acts on the lineup, including She Wants Revenge, Blaqk Audio, TR/ST, and Cold Cave in addition to relative newcomers like Drab Majesty, Black Marble, Sextile, and Softkill.

You can find out about tickets and other info HERE, and check back here for more coverage of Cruel World on the horizon!