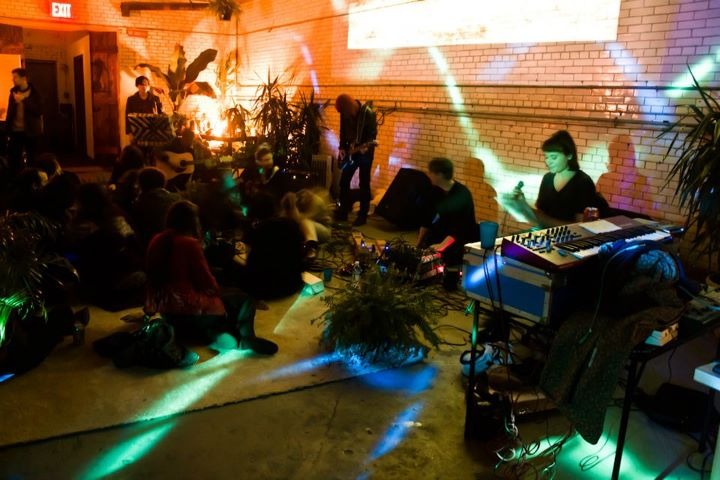 Following the Brooklyn Graphic and Comics Festival, the Cartoon House – an enormous loft near the Marcy stop inhabited by comic artists – was home to a nerd rager: the lights were on, the music was off, the beer was gone, the loft was packed, and everyone was gesticulating wildly. They had a long fluorescent light that read CARTOON but unfortunately my phone was dead (you can see it in the window near the Western entrance of the Marcy Ave J/M/Z). I hung out with Lizz Hickey and her husband Keith Jones in their room, which had two work stations and Bart Simpson curtains. We drank a shorty-forty of organic vodka and I made fun of people from our college. Ariel Z was there, too!
Rating: 1 shorty-forty.

THE GARAGE
This was my triumphant return to the aerialist space on the Williamsburg-Greenpoint-East River-Brooklyn Bowl border block, for a variety show of underwhelming proportions. I had been invited over Facebook messaging to participate in an opening bit, in which the host played a simplistic '30s crooning song on a rickety squeeze box and I sang along with two people I didn’t know. Somebody laughed at us when we couldn’t remember the words, which were mostly about smoking cigarettes and being dumped. I had to pay-in to the show to croon with strangers and be laughed at, and apparently I’m still sore over it; entrance fees are for supportive fans, not coerced paupers!
One act consisted of a stocky gymnast contorting and balancing within the bounded scope of a white, wrought-iron baby bed to the music of Pat Methany (I Shazam’d it). In the next act, a man dressed like Artie (from Pete & Pete) cued up an unplaceable game show theme and alternately mimed laughing and strangling himself with a belt until the song ended. The third act was a dance troupe’s “debut,” in which three women of varying ages, adorned in glittery undershirts and patent leather high tops, were simultaneously boring me and flinging me into a fit of listing the life dreams that I will cease to pursue in the next few weeks.

The headliner, who I believed to be the owner of the space, was wonderful, though. She did an aerialist piece in which the hula hoop (which hung from the ceiling by shrouds of fabric) was decorated like a gigantic dream catcher. Donning a feathered head dress, she swung wildly across the room to a Native American flute track. It was exactly what I hope to see in an aerialist performance.
Rating: 1 weed leaf

THE WALLET
The last time we had a party at our house (with Guardian Alien, the Dreebs, Hair Jail, and I Love You), a clear goal was set: try to get through the Asahi. My roommate Adam (of the Dreebs) had bar-managed an enormous, 3-day concert sponsored by Asahi, and by the end he had rescued over 100 cases of the Japanese treat that would otherwise be thrown away. But for eight people who can’t say no, 100 cases of Asahi is a disaster in dream’s clothing.
This show was curated by Stephen Cooper (of Eagle Ager, SUNY Purchase, and Living Things), and by 9 pm there were 50 people in our humble mainspace. We were really excited because Frank Hurricane was back in Brooklyn! “This is a most holy space, thank you for having us, we are eternally psyched,” he told me. “This is a most heavenly night.” He was looking me right in the eye and smiling, and then he bowed to me.
The opener was a performance piece by Brooke Herr and Weston Minissali, whom I overheard recounting that they’ve always preferred to open shows, even on tour, because their gentle act requires the quiet captivity of a relatively-sober audience. They set up two rectangular, 6-foot wooden frames, with an antler suspended in each, draped in a translucent fabric. Two antlers were on the floor beside a contact mic, and behind them was Weston’s analog synth. The pair were the most angelic shit in the place, elegantly thin, with dark hair and doe eyes; Brooke was dressed like a nymph in a Midsummer Night’s Dream. Though we had tried to clean before anyone arrived, they swept more legitimately so that she could prance about barefoot.

They began with Weston’s slow tones, as Brooke slid the antlers with her toes and bent to stroke the contact mic with her fingers. Peter Edward’s sound-responsive orbs hung above them, illuminating in reds and pinks under Weston’s sway. The sound of a beer can being opened seemed incredibly loud and disrespectful, so everybody seemed to wait. After a few minutes Weston came out from behind the synth, with kite strings on his fingers. Brooke silently unraveled them. Then he went in for an open-mouthed kiss. She shifted away, as if it was unwanted, and belted a tone into his mouth. He sang back into hers. They want back and forth, caroling and gasping for air, creating juicy mouth sounds that made everyone laugh. Under the blinking red orb it felt like a wonderfully-postmodern Valentine’s Day rom-com. After the performance I gave Brooke my email address.
Minutes later Cave Bears performed, whom Kunal, Nat, and I opened for (as a rare, absurdist incarnation of Loud Objects) at Gay Gardens in Allston, Massachusetts. I talked to Nick Williams, the personality of the moniker, before his set, and he told me that he and his tourmates, Knight Howls, had kicked off their tour in an abandoned zoo, within the confines of a clearly-haunted animal cage. Nick began his set with a joke-contest, called “How Much Do You Know About Cave Bears”! It had its own theme song, which I can probably still hum. The gentleman who could name his record label was awarded a Cave Bears CD. The young lady who was asked if she liked Grateful Dead (she doesn’t) and then forced to sing Grateful Dead lyrics from a sheet while Cave Bears played was also awarded a Cave Bears CD. The young man who was able to name all of the members of Grateful Dead (fully dependent on the audience yelling their names – even Jerry) was handed, you guessed it, a Cave Bears CD. An older-than-I-am woman whom I invited to the show remarked what a coincidence it was that she had been listening to Grateful Dead that day.
The lights were then turned off. I got scared so I clapped, in hopes that the sound-responsive orbs that hang in my living room would illuminate and tell me that things were all right, but they were off! It was Knight Howls: “heavenly brothers” Frank Hurricane and Adam Foam took their shirts off and began to stalk the room, in pitch darkness, manipulating their panting in microphones like wild gorillas, conjuring the souls of that had haunted the zoo cage. Terrifyin’! I thought they were going to rap!

The projector was set up atop a ladder. Living Things screened a stop-action video of toys and frogs, slinking tubing and pink flamingos dressed traditionally as Death. Behind a scrim that wasn’t lit, they played flutes, rods, and other magical, tonal toots. It was hilarious, and the whole room was laughing at different moments. For the outro an animatronic bull was positioned to trudge toward a wall, bouncing off the brick and powering ahead again. The scrim was then backlit, wherein Hunter was wearing a big bull helmet head. Stephen Cooper thanked the crowd, and then tried to name all of the Wallet inhabitants (forgetting me.)
At the end of the show we were totally out of beer.
Rating: 3 weed leaves

I went to Talibam’s Holiday Spectacular at DBA because Greg Fox and Justin Frye were debuting a new jam/jazz ensemble called Global Purge, featuring Mario on a saxophone that was said to be totally broken. Despite this, their set was enjoyable, in part because Mario held a second horn to the end of the saxophone, affording the aching brass a subaqueous appeal. The rest of the show was freakish; screechy punk bands playing songings about killing rats with the house lights on, sweating profusely while a smoke machine blared and a small, E.T.-esque man wearing an MTA hat drummed in choppy, sixth-lesson form; between every set a hodgepodge band of random white-haired dudes would play George Gershwin covers on a crappy Casio keyboard, exchanging a bunch of the lyrics with “bitch,” a joke caught probably-only by this author (unless someone else there had a theater background). I didn’t drink and then I asked myself to leave.
Rating: 1 sobering

VIBES HQ
Angelina at the Vibes HQ invited me over on Friday Night to do “spoken word” while the Astral Orchestra Project played their “string based, synth heavy, drone” jam, headed by Mark Dwinell of Forma but apparently the members of the “one-time” ensemble were unaware that I would be joining them. I brought a microphone from home. Projections of pixelated waves and an animated, blue Buddha floating in the air and spinning played on the wall. The bar had Reyka vodka (a popular donated booze on the scene) and psychotropic-mushroom tea, which is rumored to be not-that-strong (though I can’t speak for it, I don’t partake, I’m edge). The drone tones were playing for a while before anyone got the idea to pay attention. Angelina introduced me to Mark, who didn’t extend a hand or smile or even say his name; he simply told me to wait for a while before speaking and to know when not to speak at all. My microphone was plugged into his mixer so he didn’t turn it on. When he did turn it up he put it on a 1.5 second delay. I thought the delay sounded cool, but Angelina tried to prod him to take it off; technically no one could understand what I was saying. From there I just felt a little uncomfortable. My drink had been knocked over, so I couldn’t find solace there. I gave my microphone to someone else, so he could howl while he layed on the floor and watched projections; it was a better fit than what I had been doing.
On my way home with Jordan, we bumped into DJ Dog Dick smoking outside of an apartment with John Mannion, who lives year-round in Far Rockaway in a noise boys house called Red Light District. I like them because they’re all crazy and from Long Island like me. We went inside where the rest of the noise boys were, along with some girls and a tiny kitten named Lidia. They were listening to Television really loudly. Jordan and I shared a beer. Jeremy Nissan, who also lives in Far Rockaway, started badgering the host to put on The Stranger, recalling that Billy Joel had driven drunk into the living room of an old woman’s house; typical Long Island.
Rating: 1 spilled vodka

PrevPreviousReview: Richard Grossman's The Animals
NextReviews: The Portraits, Rags & Ribbons, The Lower 48Next