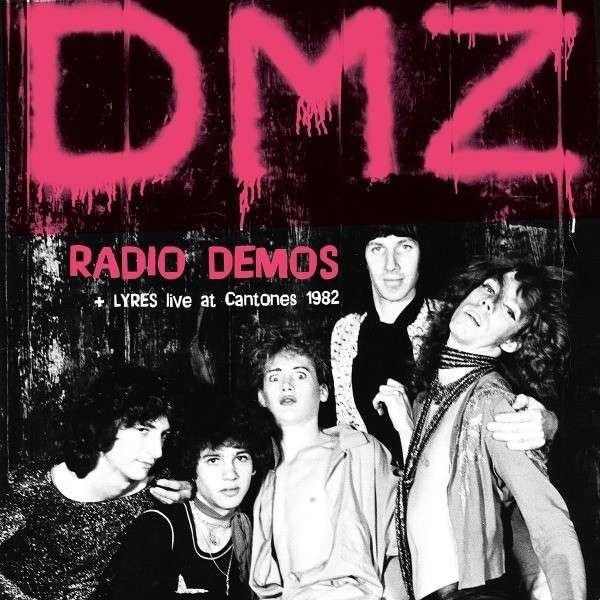 DMZ, Radio Demos / Lyres, Live At Cantone’s 1982 (Munster)
Munster has done it again. This 25-track “split” CD will send fans of these two bands wailing and screaming all through the house. I suppose it’s not really a split since the bands are two sides of the same coin, and the musical mind of Mr. Jeff Conolly. The first twelve tracks are the DMZ radio demos recorded during the summer of 1976, with a line-up that includes future Cars drummer David Robinson. They cover “Somebody’s Gonna Get Their Head Kicked In Tonight”, “Til The End Of The Day”, “Glad All Over” and “Teenage Head” all with the unbridled enthusiasm one would expect of them, if not necessarily harboring the virtuosity of professionals yet. But that’s the ultimate beauty of it. This stuff is the seminal material in the musical life cycle of Conolly, and his two significant bands. As the centerpiece of this pair of bands, he has established himself as a walking/talking iconoclast/anti-hero for the ages, who’s been at it for more than thirty years, and who embraces all that came before him, while at the same time always moving forward. He has willed himself to become what he thought he could be, a timeless mutant; and the apparent anachronisms in the music are also the raw material for some new twisted mutations of an older sound each time out. The Lyres show contained on this disc is also an important document of a musical moment in time. With so much live punk/underground music of the past three decades lost to us it’s nice to have these decent live versions that would form the basis of the lengthy Lyres catalog. “I Really Want You Right Now”, “Help You Ann” and “Come On Up” join the readily identifiable “Don’t Give It Up Now” as the engine of a sound that Conolly would go on to ride for the rest of his life. This collection is a hell of a lot of fun. How many things can you say that about these days?

Prophets & Kings, S/T (Self-released)
This gang of flat-out phreeks hails from Chattanooga, Tennessee, a place I called home for over ten years, and they aren’t afraid to bring the crunk or the noize. Sitting two hours north of Atlanta and Athens, Chattanooga is at a decided disadvantage in terms of being able to keep her gifted children in-house. In the 90s anyone in the hip-hop community that had any talent, and/or ambition, would hightail it to Hotlanta as fast as you can say I-75 South. And the same could also be said for the electronic music community and the general rock and roll scene. If people didn’t go to Atlanta they went to Nashville, Knoxville or Birmingham, because that’s where the action was, of course. P&K have already vaulted themselves to a higher plane of recognition and they’re being mentioned in the same breath as Dan Deacon and Yeasayer, and, dare I say, they actually surpass both of those slightly overblown/overrated examples. Yeah, that’s right, I said it. Bring it on. These guys are out of their musical minds and they have the chops to get away with it all. At first, the vibe is a moderately pissed-off Frankie Goes To Hollywood. “Bear Milk,” wrestles with a homo-erotic motif that extends from the song titles to the shirtless band photos. The vocals are excellent and lead the charge on a very solid bunch of songs that are all over the map stylistically speaking. They can be raw and rambunctious, loud and brash, slick and sleazy, but they maintain a consistent sense of clattering melody and counterpoint, and they have a confident sense of presentation. They’re OMD stoned and in overdrive. They’re an electro-disco Black Lips. They throw in lots of bits in the mix and one can get lost in the sea of sounds, sticky beats, staticky notes and quirky keyboard tones, but you can still dance to it. “Eunuch” is raw electro-distorto-rock not unlike Xiu Xiu, and “First Taste” is a slick dance-pop thing that goes slightly off the rails and still hits home plate. Everything they try they pull off with some discomfited aplomb. The shit just works. Ain’t nothing to be fixed here. This is an impressive effort, and this album will end up on a few year-end “best of” lists if enough people hear it. They already have plans to collaborate with several other artists, so bigger things may be on the horizon. Are they a creation of some mad Svengali pulling strings from behind the curtain? Did they just pull this album out of thin air? Time will tell. And so will the next record. Someone, somewhere, should sign them to their label now, before they burn themselves out and the world never gets to hear them. That would be a shame.