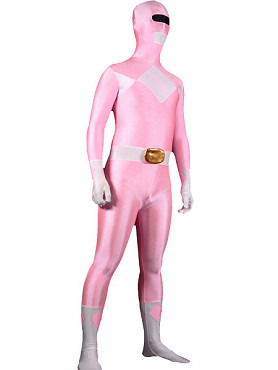 There was a point in every 90s kid’s life where their biggest worry wasn’t school, a job or bills — it was whether or not the Power Rangers could survive Rita Repulsa and Lord Zedd’s shenanigans. If you re-watch Mighty Morphin’ Power Rangers today, you’ll be amused by the ridiculousness that takes place in every single episode. The insults, special effects and characters in general were a mixture of corny & cheesy, which may sound like a delicious concoction — but is actually impossible to digest without laughing.

Watching the show now has its benefits though; you can appreciate things that you didn’t necessarily enjoy in your youth. The hotness of Amy Jo Johnson (Kimberly, the Pink Ranger) is one thing many of us noticed in the 90s, but really value as an adult. Johnson’s gymnastic skills, all pink clothing/ accessories and obnoxiously cute karate shriek (hi-yaa!) that came with every chop or high kick really won our hearts over. Of course, now it’s obvious that Tommy the Green Ranger was hitting that. The two have a strong chemistry and in all of their scenes together, you can cut the sexual tension with a knife… or a Dragon Sword.

The show is so ludicrous that not only does it provide laughs; it shocks and awes you with characters who display incredible stupidity. If Rita really wants to destroy the Power Rangers, why not create several monsters, make all of them grow and send them to the Power Rangers’ town (Angel Grove) to wreak havoc simultaneously? And who in the hell are these brave, yet foolish souls who choose to reside in a town as horrendous as “Angel Grove”[1]?

[1] THE TOP FIVE REASONS NOT TO LIVE IN ANGEL GROVE
1. While you’re walking in the park, you might be attacked by a group of clay men, donning gray spandex suits and making obnoxious, gibberish sounds.

2. There are constantly gigantic monsters battling equally massive, metal dinosaurs. They destroy streets, buildings, cars and possibly even innocent bystanders in the process.

3. Some crazy b-tch (Rita Repulsa) has made a full time job out of obliterating your entire town… And she’s rather persistent.

5. The leader of those teenagers is a face in a tube.

As 90s kids we often played Power Rangers with our siblings and friends. The Ranger you found yourself playing as the majority of the time says a lot about you. Read below and see your past defined in a nutshell.

GREEN RANGER: Either you had a crush on whoever was playing as the Pink Ranger or you wanted to be a leader and Red Ranger was already taken.

BLACK RANGER: You were probably black. The show itself was bold enough to blatantly make the black (or yellow) ranger their “race’s color” — so kids unintentionally followed in their footsteps.

PINK RANGER: Reserved for the cutest girl. FYI, chances are whoever was the Green Ranger had a thing for you.

BLUE RANGER: They took your lunch money, had you do their homework and then worst of all, made you be the Blue Ranger. Brutal.

RED RANGER: Congrats, you were a badass. 98% of kids wanted this role so if you got it, kudos to you. Red Ranger meant you called the shots, kicked the most imaginary butt and made the important, executive decisions — like whether to finish battling make believe Putties or stop to catch the ice cream man.

Nickelodeon was (and still is) a massive part of 90s pop culture, and since Doug was the first Nicktoon ever aired, it’s beyond worthy of discussing. Doug Funnie spent a good portion of his life in the 90s putting an undeserving Patti Mayonnaise on a pedestal. Obviously as adult humans, it’s difficult to judge the physical attractiveness of cartoon characters — especially those who are eleven years old. That being said, Patti is not that freaking cute. She wasn’t particularly smart or funny and she admitted to not being able to cook (in season 1, episode 11 “Doug’s Cookin’”). So, what Doug saw in Miss Mayonnaise that made him go cuckoo for Cocoa Puffs remains to be seen by the rest of us. Her raspy voice and accent were cute, but the blonde afro-esque hair, the blue and pink polka dot shirt, the lanky, gangly body and boyish charm all canceled that out.

One can make the argument that Doug isn’t much of a looker himself. With that hideous green sweater vest, an enormous honker, those beady little eyes and what seemed to be some sort of balding issue (only eight strands of hair) at such a young age, Doug wasn’t exactly model material. That all being said, there’s no excuse for a person to do the extremely desperate things that Doug did for Patti over the years[1].

1. Learned how to dance FOR PATTI.

2. Joined a school ballet FOR PATTI.

3. Handcuffed himself to Patti with no key after performing a magic trick FOR PATTI.

4. Lied about having a sick cousin to avoid going to the dance with someone other than Patti, FOR PATTI.

5. Saw a hypnotist to try to force himself to like the taste of liver and onions, which he hated, FOR PATTI.

Doug, she ain’t worth it bro! There’s other fish in the sea… Specifically Ariel from The Little Mermaid. Way cuter (even with the fins).

Hey, what are you doing this weekend? Wait, let me guess… You’ll be doing something other than watching TV. It’s funny because there was once a time in our lives in which we spent our weekends at home, enjoying television. Of course, the fact that we were in our youth and far below the legal drinking, clubbing or gambling ages played a part, but don’t discredit ABC’s TGIF and Nickelodeon’s SNICK. At different times over the decade their lineups included various combinations of shows[1].

It’s quite disappointing to realize that never again will a television lineup be entertaining enough to keep us home on a Friday or Saturday night. TGIF brought folks together to watch family-themed sitcoms, engage with one another and enjoy some laughs. SNICK was aimed more for the kids than their parents, but it was another night of our favorite shows, jam-packed into a two hours of epic TV watching.

Reflecting on what the weekend used to mean to us in comparison to what it is now can be somewhat depressing for many. I believe this is why so many of us get slammered drunk on the weekends. Alcohol serves as a coping mechanism to block out memories of the greatness that used to be Friday & Saturday evenings. I’ve tried to stay home on a weekend and watch the malarkey that comes on currently and all I can say is… Stay thirsty, my friends.

DID YOU REALIZE that Melissa Joan Hart was the only star of a tv series on both TGIF and SNICK with Sabrina The Teenage Witch and Clarissa Explains It All?

AND NOW, IT’S TIME FOR “AN ANGRY LETTER FROM 90s KIDS, TO TELEVISION NETWORKS”

What in the hell are you doing lately? I mean, we understand that it’s easier to make cheap, crappy reality television and poorly written shows instead of spending the money on some talented writers, and producing a more expensive studio series, but c’mon. Friday night has gone from TGIF’s brilliance to the place where mediocre sitcoms go to die. And Nickelodeon, what’s the matter with you? Replaying episodes of That 70s Show all day (as great as it is) won’t get you higher ratings. So somebody, step up to the plate, reach into the wallet, break open your piggy bank and throw together a decent block of weekend television. Until then, our attention goes to clubs, partying and booze. Good day.

P.S. We’re really starting to grow rather fond of hard liquor & the scandalousness of clubs so get on it, time’s a wastin’.