Ahh, this truly is the summer of love all over again. With less love. And better music. For the seasoned scenester, the summer months don’t mean beach trips (too dirty), star-gazing (too cloudy) or backyard barbecues (too suburban). They mean summer concerts. Free summer concerts. Summer means the best free and dirt-cheap shows around, and the hardcore concertgoer can spend every night from now till September not paying for stuff, provided he or she packed enough earplugs.

The most consistently good of these festivals is the River2River fest, which for six years has made it possible for those without proper business attire to access the downtown area. Less hippy than Central Park Summerstage and more central than Celebrate Brooklyn, they boast venues ranging from an abandoned fort to a pier to a lobby (and it goes downhill from there).

The ’07 R2R season kicked off with a bang and a drizzle on Friday, June 1, with Animal Collective and Danielson at South Street Seaport. The event was huge. Downtown hasn’t seen this many people on the streets since the stock market crashed.

Odd to kick off the biggest event of the biggest festival with two bands that are, shall we say, acquired tastes. And yet people came. Even in the rain they came, and by nightfall when the sky cleared you could tell this was more than a concert. It was a happening.

Of course when you got away from the clump directly in front of the stage, the crowd was more there for the hangout than for the music. But with a band like Animal Collective you really don’t have to pay attention. In fact, they’re better that way.

The only trouble was, Pier 17 is, like, actually a pier. And while piers may be good for long walks, a stretch of flat wood isn’t quite the ideal place to put an amphitheater. For one thing it’s terrible acoustics. To compensate, the sound engineers enacted this brilliant plan: First, they put a dozen big-ass speakers right in front (and nowhere else). Then they cranked those babies up to eleven, in the hopes that by the time the sound reverberated through a couple thousand deafened 20-somethings, it might come out quality on the other side.

Which meant that if you happened to be in the front your brain acted as a sounding board for the people behind you. Which is a bit uncomfortable. But since the pier is flat, you’re not going to see anything if you’re not in front

Weirdly enough the best sound in the area was right under FDR drive, where the music bounced off the concrete above and below.

First up: Danielson. Daniel Smith has been making weird, fun, inostensibly Christian music with and without his twelve brothers and sisters since forming the band while still at Rutgers. His latest stint, under the name Danielson, is more accessible than the mostly ponderous solo Brother Danielson record from two years ago, but still not as much quirky fun as the original Famile. While the moments of brilliance are sometimes well-spaced, they’re usually worth it.

Coming out in matching nurses outfits with white hearts emblazoned on the caps, the Danielson crew and their squeaky frontman started the night loud and odd. Wife Elan and sister Megan sang backup and played marimba, tambourine, claps and girl scout dance moves. They both still sound like they’re twelve even though they’re each taller than Daniel, who incidentally sounds like he’s eight.

After some tracks off of the new album, Ships, (played in front of some actual ships) they rocketed back to 2001 and played some of the great old tunes, like “Rubbernecker” and “Idiot Boksen”.

They ended with a glorious “Five stars and two thumbs up”, thanking, it seemed, each and every person in the audience. One by one. It’s one of those songs that doesn’t feel like ending, ever, and by this point I was realizing how untenable the whole front-row thing was getting. Everyone within twenty feet of the stage had their hands over their ears, and despite what it looked like we were just trying to enjoy the music.

Wearing a cap and t-shirts, surrounded by mixing equipment, Animal Collective looked less like avant-indie and folk-noise rock’s best new hope and more like the world’s whitest rap duo. Fresh Grits and DJ Billy Bob. When they started playing semi- to fully- random noise with echoed yalps and mumbles, I started wondering if they had hit on an entirely new genre, hillbilly trance. Then, without warning, Panda Bear starts singing “Who could win a rabbit” in near-doubletime, over some entirely different music. Yes, they were just having fun. Sounds shouldn’t ever sound the same twice, man.

The rest of the night was devoted to new material, which may or may not have dipped back every now and then into stuff off of Feels, but I couldn’t really tell. They stopped maybe twice in two hours, just to rest our ears and apologize for playing more new stuff.

The new album, if this concert is any indication, should be both louder and sappier than Feels, since the only words I could understand from my vantage (having abandoned the front row for a quieter spot on the pavement with some Mr. Softee ice cream) were fairly happy-go-lucky.

But, as I said, by the end they were just providing some noise and beats for this massive downtown happening, and by this point everyone was having a grand old time anyway. Masses of people drinking and smoking and sitting on the dirty ground in circles just like the hippies of yore.

In the front was mostly younger kids, frighteningly young, probably Jersey and Long Island high schoolers hip for the first all-ages show of the summer. Many still proud of their facial hair and/or training bras. Nearly all in small 5-10 person groups of self-enabling, self-perpetuating weirdness.

For some reason, everyone looked like there was something wrong with them. I mean, other than listening to Animal Collective. Like their chins were slightly too big, or their faces a little to round or their noses inside out. Something. This one girl, swear to god, had no lower teeth.

Off on the crowd fringes we had more of your usual mid-20s fare, drinking and carousing. The occasional white boy doing their white boy dances. (Is he falling down? Or is he getting down?)

Let’s hear it for that one dude ‘raising the roof’. The entire time. Yes, it is only thanks to you that the roof remained raised, despite being on fire, and despite the apathy of onlookers who were, for the most part, content to ‘let it burn’. 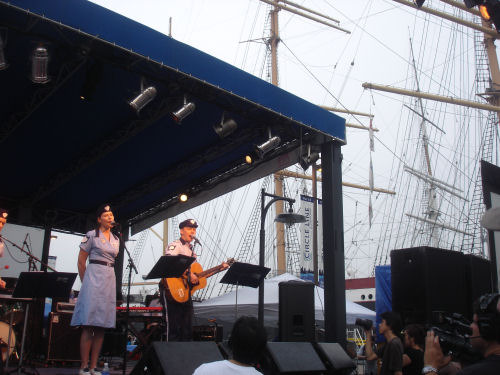 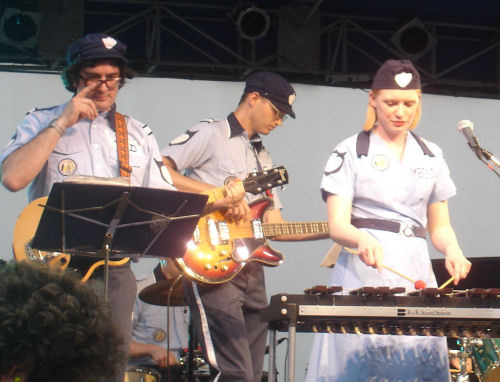 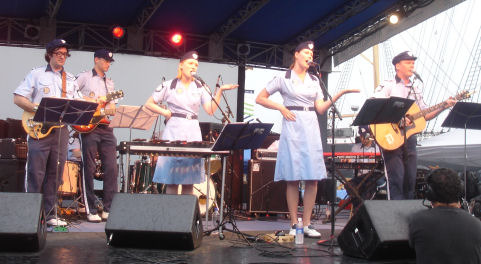 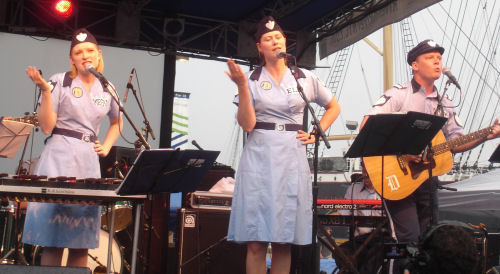 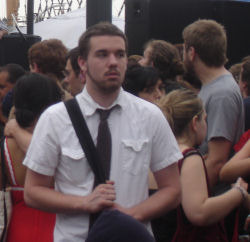 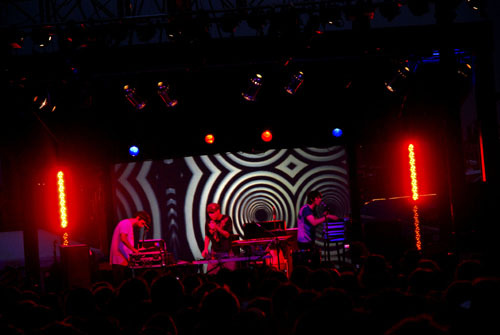 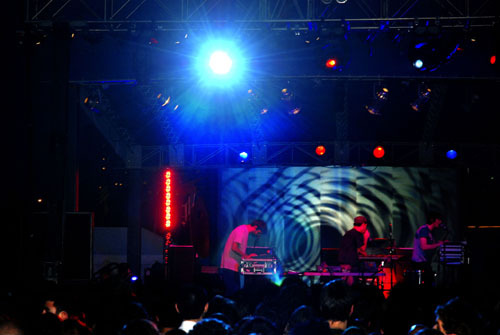 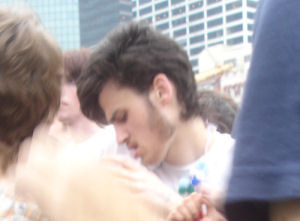 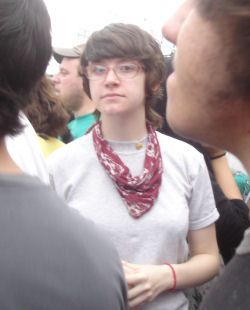 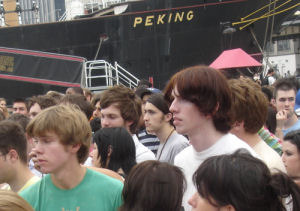 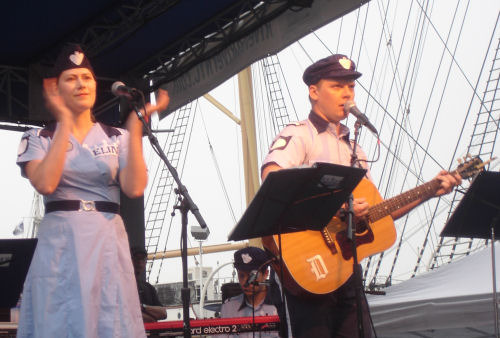