Walking towards Lifestyle Communities Pavilion, I heard James Murphy pelting out the final breakdown of “New York I Love You,” a song I have yet to see live, heartbreaking as it drifted over a twenty foot wall. Once again, I had missed an opening act due to an unreasonable 7:30 p.m. start time.

I fulfilled my indie kid duties by finally seeing The Arcade Fire live. At least, I got it in before a reunion tour, which is not a far fetched joke, as Win Butler announced that it would be a long time before the next tour. After this trek wraps, the band is poised to return to the studio, cathedral or Tibetan monastery; wherever it is they choose to record the new record.

“Black Mirror” opens the set like a beast, with eerie bible thumping video clips overlapping into white noise until lashing piano takes over. It works as a monstrous introduction, the band surrounded by glowing red neon bibles, dark lighting, and the furious pounding of guitars, pianos, violins, and drums.

In keeping with a visual transmission of Neon Bible, the band played under a haunting lighting arrangement during its first four songs off that album. Even if “Keep the Car Running” has more pep than the spiritual blues of “Intervention,” the band sustained this disconnect for the audience. Perhaps it had to do with their regal wardrobe, but The Arcade Fire do not have a “we’re just like you” presentation. Instead, they stand as griots, perhaps possessing a new knowledge they have come to bestow upon us all, city by city. I might have been getting too high on my first Arcade Fire performance, but I felt a small spiritual tickle. It was not recognition of seeing them in my image, but a new face presenting a chance to take something new home.

I had been somewhat disappointed by Neon Bible, feeling as though it lacked the relatable anthems that drove Funeral into my heart. Nonetheless, Neon Bible found me that night. I also confirmed my faith in the boisterous pomp of “Neighborhoods #2 (Laika),” “Neighborhood #3 (Power Out),” “Wake Up” and “Rebellion (Lies).” The Arcade Fire has forged a balanced creed through the spiritual blues of its sophomore record, and the anthemic chants of all those little gods turning everything to rust. 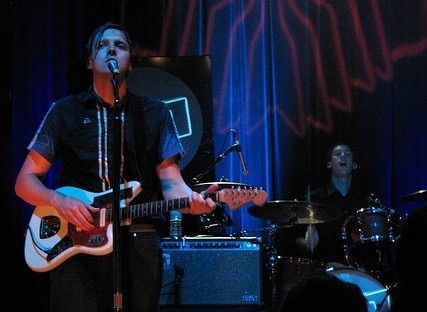