Lotta great bands performed Saturday. Levon Helm played a version of “Anna Lee” that’ll probably have me waking up in a cold sweat one of these days. Sigur Ros played a set that had me waking up in a cold sweat as recently as last night. Pearl Jam… whatever. They were a’ite. The only thing that people will remember about Saturday–and possible the only thing people will remember about this year’s Bonnaroo, other than MMJ’s astonishing, four hour stand–was the Kanye West debacle.

Here’s what happened, essentially: Kanye somehow got his set moved from the side stage on Saturday afternoon to the main stage early Sunday morning. I imagine there’ll be some speculation as to why this happened, but I think the festival organizers had planned on rescheduling the set all along and announced it at the last minute to give the weekend some added drama. Anyway, the 2:45 start time–and the fact that Kanye is, for lack of a better term, a lil’ bitch–meant that Phil Lesh and Ghostland Observatory would have to cut their sets short, as per Kanye’s tyranical request that he be the only person onstage anywhere at the festival during his set. This led to the saddest spectacle I have every seen as a concertgoer: that of a living, breathing member of the Grateful Dead–a band with a pretty abysmal survival rate, come to think of it–being forced to stop halfway through his set at easily the most important jam-related event of the year. What an unconscionable act of disrespect, this business of forcing a man who stood beside Saint Jerry for 7,000-odd shows off stage in favor of a performer who would have been totally out of place at Bonneroo only a couple of years ago. But things were about to get more awkward.

I don’t so much mind that Kanye didn‘t begin his set until after 4:30, since this mainly punished the people stupid enough to skip Sigur Ros. What Kanye actually did when he finally got on stage was something worse than pathetic.

The premise of Kanye’s Glow in the Dark tour is pretty simple: last year, he recorded a song that sampled Daft Punk. At the time, Daft Punk happened to be in the middle of a tour in which they performed on top of a giant plastic pyramid, which is just the kind of over-the-top gimmick that separates the true superstars from the mere mortals. Of course, two years ago Kanye didn’t need any over-the-top gimmicks to be a superstar–when I saw him headline the last ever HFStival, he appeared onstage with a gospel choir, a string section, a DJ, and an unassuming turtleneck sweater. While this was around the time that he crashed a few award show stages demanding recognition of his $1 million video, it was a show put on by an artist who obviously cared more about music than he did about image, and it was one of the most incredible concerts I’ve ever seen.

By contrast, the Glow in the Dark tour is pure image. There would be an element of self-reflexivity to it if it weren’t such blatant plagiarism: behold, robo-Kanye, flesh turned to disaffected, dehumanized rapping machine by the very fans willing to pay so much to see him act out his metaphoric rebirth as a disaffected, dehumanized rapping machine. But let’s not give him too much credit. It’s one thing to do a Chris Rock-style hoodwinking so skillful that the audience doesn’t have the slightest inkling of being hoodwinked. It’s another to appropriate someone else’s good idea and then denude it of everything that made it so good: the kitsch factor, the spontaneity, the sense of a real, human talent behind all the strobe lights and special effects. While the Awake tour produced a well-received live album, Glow In the Dark won’t produce anything worth listening to twice, or even once, for that matter: The show in Cleveland will be the same as the show in San Jose, and the show in San Jose will be the same as the one in Manchester, Tennessee. It’s made to be repackaged and reproduced–not to produce the kind of special, live moments that Kanye once had such a preternatural ability to create.

There were some special moments on Sunday morning, but they probably weren’t the kind Kanye had in mind. They mostly involved disgruntled fans giving him exactly the reception he deserved: boos, chants of “fuck Kanye,” a hailstorm of glo sticks and plastic bottles. God willing, this will become a career-defining moment, the type of thing that will follow him around as long as he insists on producing and releasing albums. And God willing, there will be someone selling ““Fuck Kanye” t-shirts at the next Phil Lesh concert I attend.

When the Kanye travesty wrapped up at around 6 AM, it was tempting to think that Bonneroo had wrapped up with him. Not so. Phil Lesh might have been forced offstage early, but the festival wasn’t going down without a fight.

Case in point, the numerous adventures I had between the hours of 7 AM and 1 PM. I snuck on to the main stage. I hung out with people too bowled over by acid to risk the perilous journey back to their tents. I went to the daily 9:30 yoga lesson. And I had a chance to think about what kind of a festival would even have a daily 9:30 yoga lesson.

The thing that makes me think that the Bonneroo spirit is more or less uncorruptable is that there even is a Bonneroo spirit to begin with. This sounds like apologetics, but hear me out: the most visible magazines were Relix and Paste, which were basically boutique publications a few years ago. I think Rolling Stone had a tent, but it was discretely tucked away next to one of the side stages. MTV and VH1 weren’t there in any commercial capacity, and neither were Virgin, Apple, or any of the various other entities that seem so dead-set on ruining music. Sure Metallica headlined, but people still felt safe tape-recording performances in broad daylight. And while Newbury Comics ran the festival’s music store, the vendors were overwhelmingly independent–one of the few reasonably-priced places to get food was a tent run by a Georgia-based coffee shop company, complete with indie-style chalkboard menu and cheap shots of espresso.

So Bonneroo is a big festival that feels like a small one. It has a whimsical aesthetic that is obsessively maintained, and while the festival’s social justice angle is pure sanctimony (because remember, children, the only “sustainable” music festival is the one you don’t have) the hundreds of activists who set up shop in the middle of Centeroo weren’t sanctimonious in the least. The fact that there was anybody manning the Genocide Intervention Network booth during Sigur Ros’s set is a sign that the festival still has its soul–that Bonneroo still refers to a recognizable brand name, and not simply to a couple hundred musicians that have been paid to schlep out to the middle of nowhere.

The Sunday lineup was further indication that the Kanye mess was a kind of exception that proves the rule. Afro jazz legends Orchestra Baobab played an inspired set in front of a crowd still groggy from its truncated sleep cycle (thanks a bunch, Kanye), while gospel-blues troupe the Lee Boys made Robert Randolph’s later-afternoon set feel like a letdown. They were easily the find of the festival.

Yonder Mountain String Band played like the bluegrass superstars that they are (mando player Dave Johnston had the line of the festival: “We‘ll play the Glow in the Dark set next year,” he said. “And we won‘t screw it up.”), while Phil Lesh, Larry Campbell and Jackie Greene delivered an acoustic set that I hope to God gets leaked online one of these days. To top if off, I caught about a half an hour of a documentary about Bela Fleck’s exploration of the origins of the banjo during a field-recording trip through Africa. If you’re any kind of a world music fan, the soundtrack to Throw Down Your Heart is an absolute must-have.

So, news of Bonnaroo’s over-commercialization and premature demise has been greatly exaggerated. It’s an event that takes place in a totally absurd place on a totally absurd scale, with a crowd that splits pretty evenly between assholes, druggies, burnouts, hippies, southern yuppies and bonefide music nerds. But so what if it‘s basically SXSW for uncool people? We all need a break from the JMZ–although I’m anxiously awaiting next year’s hotly-rumored Todd P tent (OK, so there is no rumor about a Todd P tent. Maybe we can start one anyway?) 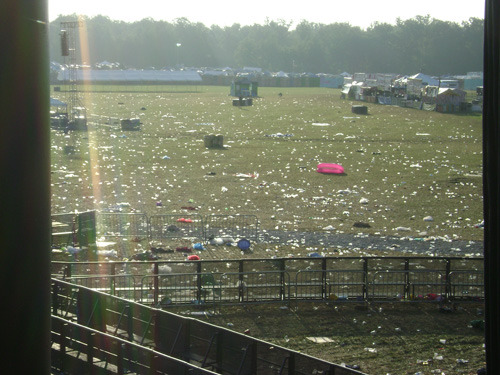 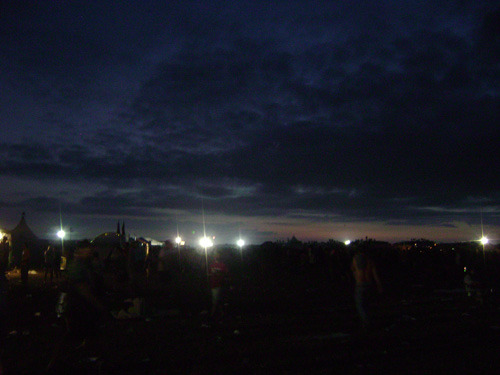 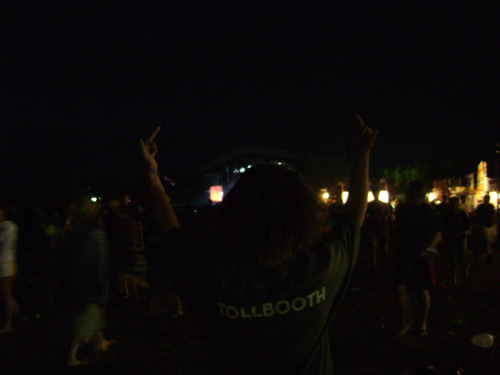 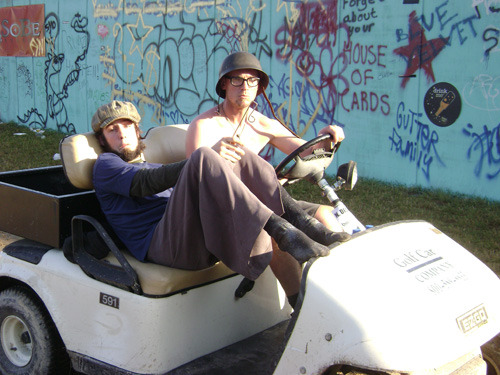 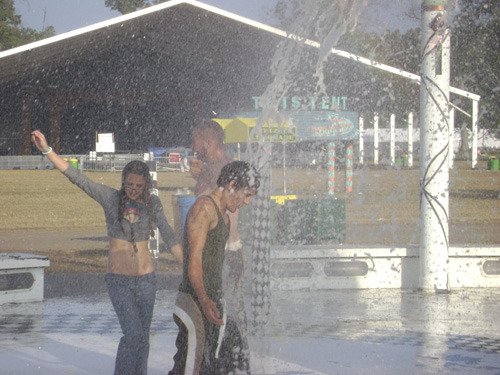 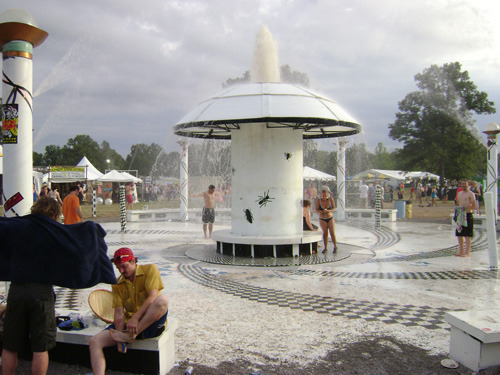 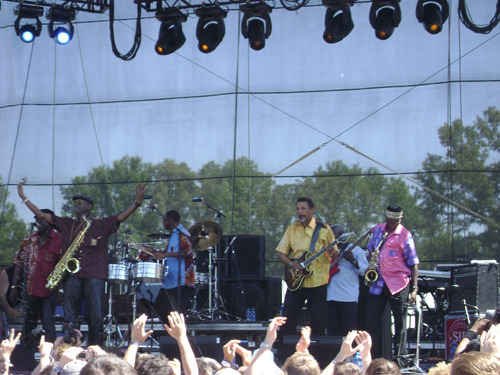 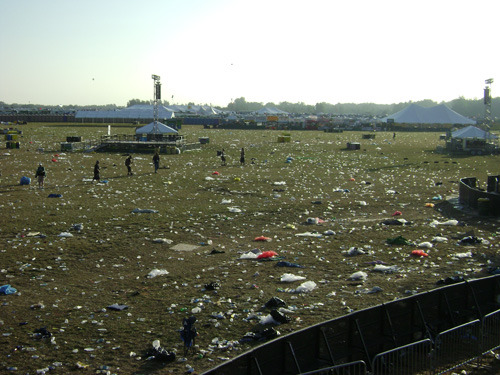