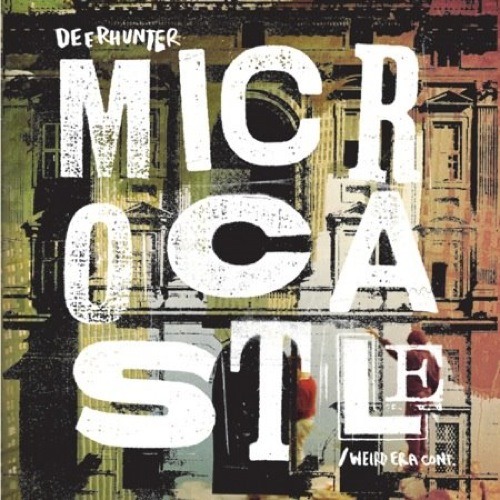 Microcastle has leaked and it’s a lighter, less damaged Deerhunter rising from the ashes of Cryptograms. At this point they’ve covered with dust sheets their self-titled 2004 full length, that of caterwauling garage-brewed psychotropic punk rock, in favor of something scrubbed so thoroughly on the studio floors that they promise to alienate some fans. So for those for whom this may apply, let go of your beloved Deerhunter, and please welcome the latest incarnation of the long running bedroom project of Bradford Cox, Atlas Sound, beefed-up with the muscle of one of the world’s best live rock bands.

For a long time, perhaps during the recording of Microcastle, Bradford Cox’s MySpace page for Atlas Sound announced “my punk days are over.” When I talked to him for a few minutes during a Black Lips show in Atlanta, he said he was sick of using effects pedals and found himself turning more and more to a clean guitar. While that sort of choice can lead to pared down, no bones punk, its results, on Microcastle, are far from that rough-shod simplicity. The gauzy 50s/60s stylings (dream wop, anyone?) are the sublime garnishes to some home-brewed sunset cocktail; they glow effervescently, and they’ll enjoy heavy rotations on many summer patios and roofs. It’s a surprising move for a guy who’s stirred up more shit on stage than anyone besides his friends the Black Lips (and King Khan) since GG Allin. It’s also a band Trent Reznor picked to tour, likely in part for their infamous live shows.

But something’s changed, and it has to do with Bradford Cox’s overriding presence: clean guitars, silky vocal lines. Ultimately, it’s nothing new, (see: old Cox bedroom recordings). While Lockett Pundt shares vocal duties on the album and has been with Cox from his earliest bedroom recordings, this appears, at least on the surface, Cox’s game. Cleanliness has always been close to godliness and Cox is no stranger to at least the former; there’s a lot of white light rushing through the passages of Cox’s career solo work, and now it’s a resounding brightness that’s seeped fully into Microcastle.

And there are incarnations of good old Deerhunter garage rumble. Tracks like “Never Stops” seamlessly integrate the doo-woppy R&B inclinations of Cox’s recent Let The Blind Lead Those Who Can See But Cannot Feel‘s more pop-leaning moments, with the added orchestrated squall of guitars that hang over the band’s past. But for the most part, this is an album that patiently tolerates turning inward on the sublimely treated ego of one man(/boy). Case in point: imagine the live-replication of title track “Microcastle”. Lockett Pundt or B. Cox strum four chords lazily above softly thumbed bass as our frontman sings sweetly into a lightly-delayed mic about negation: “Try to describe it all / End your time / End it all”.

It’s not a surprising theme for a performer who once spent a half an hour encore talking to a steadily dwindling crowd at Bowery Ballroom in Manhattan. Cox does come off as an artist who’d like to describe, or share, everything in his creative universe. He certainly gets closer than most humans, and thankfully, though he may run his mouth, his music does it with a practiced restraint.

Still, while his song-writing instincts are, generally speaking, immaculate and pure (see the quasi-Gregorian “Activa”), indulgences risk corrupting Deerhunter’s new church. No saying who penned it, but try “Saved By Old Times”, a track that opens with a kickin guitar line that would be at home on a new Dave Mathews album, with lyrics that luckily remain too weird to be mistaken for anything quite that schlocky: “We were capture by Victorian vampires / with elaborate designs.”

“Twilight At Carbon Lake”, perhaps both the best song on the album and the most similar to a previous Atlas sound track (“Recent Bedroom”) captures the same arpeggiated nostalgia for, what Cox referred to (and the blogs have quoted ad infinitum) as “kind of a doo-wop, 50s/early 60s, Everly Brothers, but through this kind of schizophrenic lens,” but it does so with seemingly less to prove- gone are the waves of static and close-mic’ed movements that seem to come from somewhere inside Cox’s mouth. Opening with three minutes of a guitar-plucked progression with waves of subtle accompaniment, it’s a relatively abridged album finale that leads into all of Deerhunter’s past tendencies, quickly distilled into a final thunderous crescendo: undulating, effects-riddled guitars, feedback, delayed vocals, a serenity in chaos that seems, momentarily, to bring us back to the band that once reinvented itself with this sonic milieu, on its last album. Still, if we were there once, Microcastle has brought us somewhere brighter and clearer, and we can only look at these momentary explosions as pre-determined stops in an inevitable journey into the calming, forever twisted ego of one bedroom recorder.