Upstairs is some sort of cupcake party, bocce ball and enough Pabst Blue Ribbon to give Charles Bukowski a hangover. Downstairs, a sold-out Ra Ra Riot show. This is a Park Slope kind of Saturday night, with Union Hall as epicenter. Mind you, they weren’t giving out any of those cupcakes. And the area behind the bocce pit was corded off for even more cupcake parties. Nothing worse than stingy confectioners.

Downstairs though, less dessert, more rock. First up is The Epochs, a Brooklyn by way of DC band that plays a light yet hard pop who remind me in a small way of a more straightforward Harlem Shakes. A sort of high-pitched Brooklyn vibe, just with faded jeans instead of corduroy blazers and more attention to electro-gadgetry and synthesized hooks.

Next up is D.C.’s Jukebox The Ghost, one of the odder bands I’ve heard in a while. Just to give you an idea: while setting up, the drummer randomly ended up playing part of the riff to “Beat It” on the synth, and the trio starts trading it around till they figure out most of the song. Instead of setting up, they’re playing “Beat It” on piano / guitar.

The songs are witty and playful, even skirting They Might Be Giants territory, with solid piano-driven rock like Piebald at its happiest. Both the pianist and the guitarist share lead singing on different songs, though the pianist is a bit more comfortable with it.

“We’re going to play a creepy song now. It’s about the Antichrist,” says the Guitarist. “It is?” asks the pianist. “Would you like it to be?” he asks the audience. The audience clearly would like it to be.

Towards the end they play a three-part sci-fi (?) song about, I kid you not, God following space probes back to Earth, which he didn’t know existed and subsequently decides to blow up. The end of the world comes, but at the last second he relents. The hook for the opener goes something like “It’s the end of the world — la de da, la de da.”

Then comes Ra Ra Riot, who are still riding the hot wave of attention based on only an EP and a single and a lot of touring, still holding strong six months after the death of their drummer John Pike, still indie darlings in what seems to be a slow and difficult, rather than meteoric, rise. Most of the songs on the EP were played, plus some brand-new material (one of which, the singer claimed, was the second time ever played.)

Also played was a poignant rendition of a song called “St. Peter’s Day Festival”, written by the late John Pike.

The six members — singer, bass, guitar, violin, cello, drums — could barely fit on the tiny Union Hall stage, and a lot of creative shimmying was done by all in order to dance around without killing anyone. It’s kinda amazing what you can do while still playing an instrument.

The set ends with the amazing “Dying is Fine”, the song that’s worth the entire Ra Ra Riot EP. It’s an enveloping, driving song, strangely powerful without being sad at all. Afterwards, they come back to do an unscripted encore for the packed crowd.

Outside, hanging around Park Slope, for no reason: some dude riding a Big Wheel. 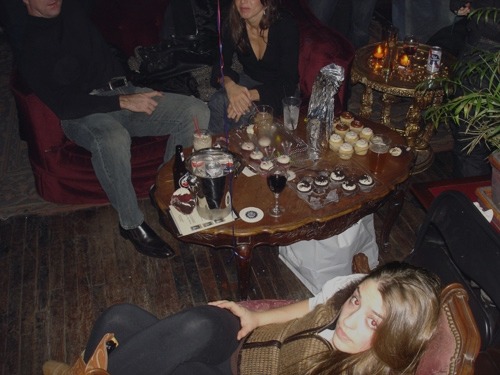 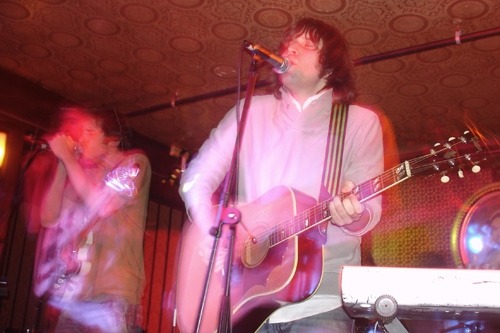 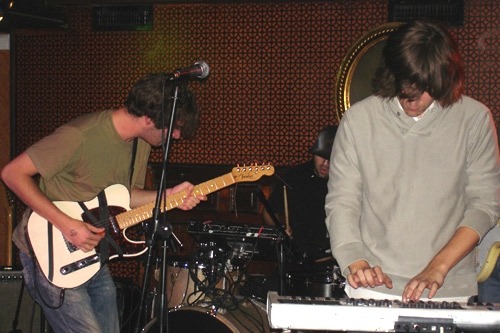 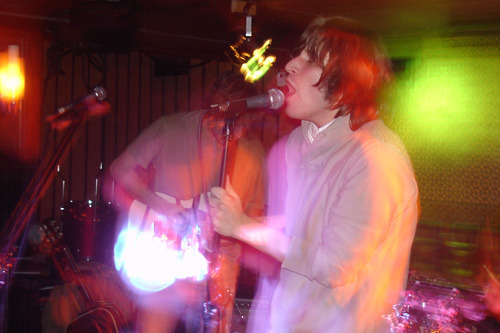 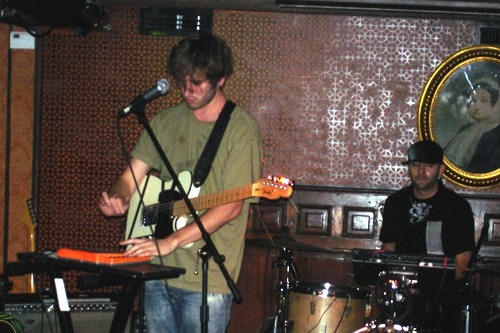 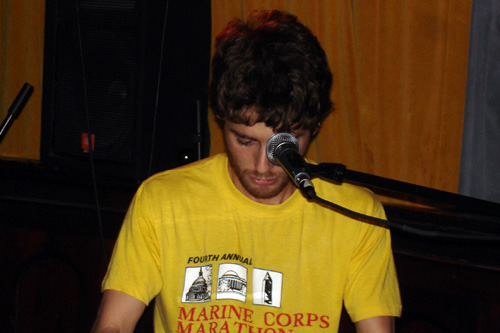 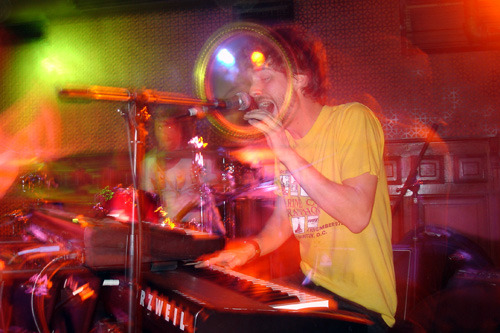 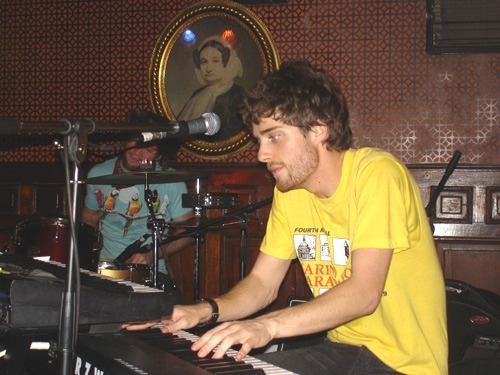 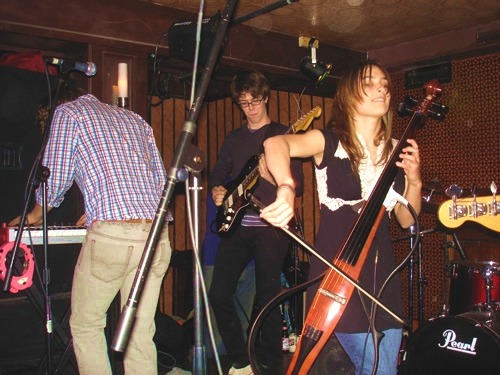 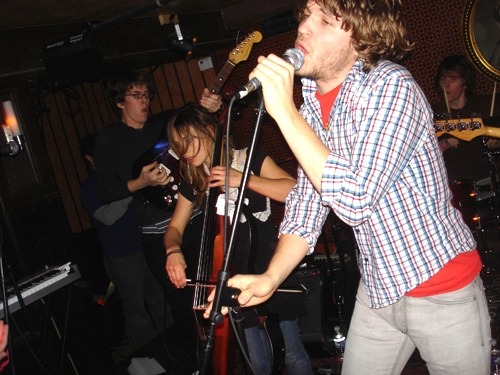 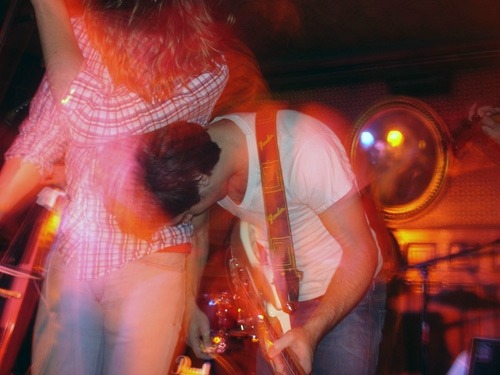 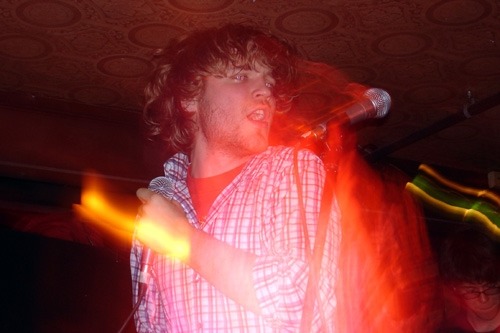 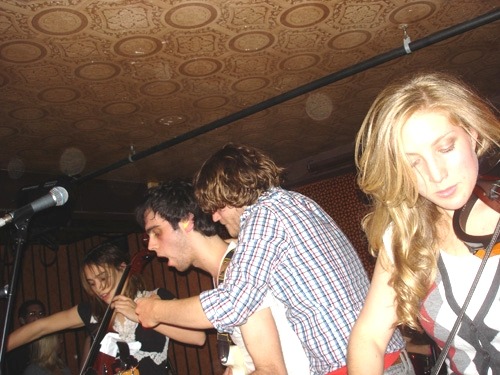 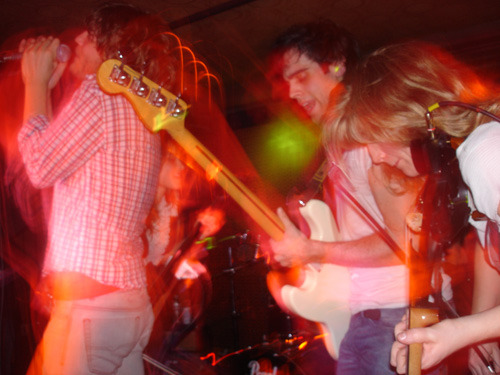 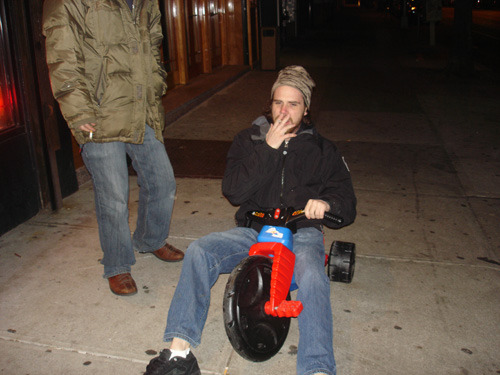 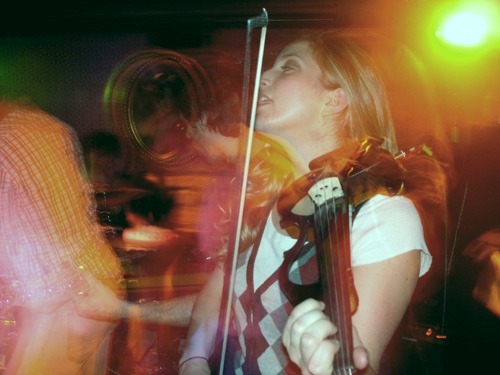