Ghostland Observatory at Emo’s in Austin

On a cool night in 2005, my life would be subtly changed by one concert. Ghostland Observatory was releasing their second album, Paparazzi Lightning at downtown Austin’s the Ritz. My roommate’s brother-in-law was none other than the genius Thomas Turner (who I had yet to meet). I waited patiently for the opening band to finish, at which point I was merely amused by their lack of stage presence. Having never heard the guys, I was expecting the usual assault on my ears. There was Thomas, the well kept one, and Aaron, whose androgyny couldn’t keep me from staring at certain parts of his anatomy. It’s hard to remember my first reaction, I do recall that first song on stage being “Vibrate”. I looked down and saw my hips moving a little. What was happening? Is there a cure? I know now there is no cure. It was shocking, it was different and I didn’t dare call it electronic, because this was making everybody dance including me. There are few ways to describe what a wall of sound feels like; perhaps imagine that your pants are on fire and the only way to put em out is to sit on an amp. Aaron Behrens and Thomas Turner of Ghostland Observatory were mystical beings slinking their way onstage. Vocals and guitar by the impish Aaron and the mad scientist of sonance, Thomas, blew my otherwise snobbish attitude out the window.

The following years yielded late nights of coffee table dancing to “Vibrate” and “Stranger lover” in our small South Austin apartment until 2006, when the duo stalked the stages of the legendary Austin City Limits festival sending a prominent buzz through the hipster scene. And from there things only looked up.

Two years later on June 20th 2007 at the legendary Emo’s in Austin, a sold out crowd danced their pants off. I was wedged between a couple of cookie cutter coeds with too much product in their hair which inevitably melted from the crowd heat. The guys arrived on stage only to melt everyone’s face, opening with “Piano Man”, Behren’s vocals landing an almost literal punch in the gut, backed by a plethora of piano and beats. From there it never let up- no pauses, all pure sex and sound coming from the stage.

All the Ghostland shows I have attended have been refreshingly consistent. Usually, I find it hard to swallow any new songs a band has to offer. Yet Ghostland’s ability to fly just under the radar leaves fans itching for anything new. There was little disappointment when they showcased a new track, untitled as of now, that I believe to be a shout out to Sugar Hill Records. “Hip Hop Hippity Hop” firing from Aaron’s lips to the mic, pulsing through the crowd, even inspiring (by coincidence, of course) a brave boy in a bunny suit to, yes hop, for the song’s duration. All hands were in the air for the crowd favorite “Sad Sad City”, the mass belting out the repeated line “I need you, to want me to hold me, to tell me the truth.” There are some strangely indirect lyrics to rival “Sad Sad City”. “Silver City” left everyone rocking back and fourth euphorically, enabling Behrens to showcase his voice and Turner to mix synthed up bass lines while painting a picture of space travel with every decibel. They didn’t forget tracks from delete.delete.i.eat.meat. A gem of a song, “Shoot Em Down” shows the band’s bravado: “Is that your man right there? Just shoot em down, just shoot em down”. It’s the perfect time for sweaty guys to look their friends in the eye and to lip sync these words in self-assurance of the lady skills they think they have.

Perhaps because of their poppiness, Ghostland shows, (in contrast to the element of havoc at punk and rock shows), are always fun. There is a smooth tolerability among the GLO fans; they just want to dance, too sweaty and involved in the performance to give anyone the stink eye. There are doubts that there will be another Ghostland Observatory show at Emo’s. In the last six months, with almost no press, they have managed to work their way to the stages of Sasquatch, traipse to Europe and back, and win a spot as a breakthrough artist in July’s Spin magazine. I have to say, I was slightly jaded by this all. A band I knew personally and wanted see in magazines actually did just that. For the elitist in me it stings a little, standing in the line with a buster behind me saying “I’m gonna be bobbin’ my head so hard tonight!” to his bar skank girlfriend. But could this be a good thing? Finally getting bad ass, honest independent music to busters and their skanky girlfriends who wear flip flops and still listen to Dave Matthews Band?

From what I know of them, Ghostland Observatory will hold onto their vision. At a Ghostland show it will always be loud, clear, hot, sexy and downright religious and you won’t be able to “hear” any dude “bobbing” his head. 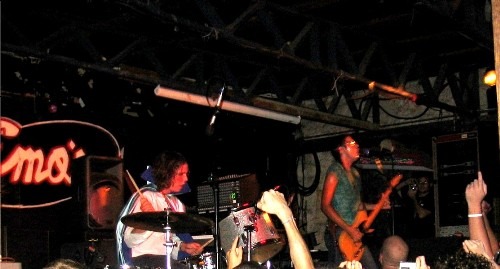 Is there a cure? I know now there is no cure. It was shocking, it was different and I didn't dare call it electronic, because this... 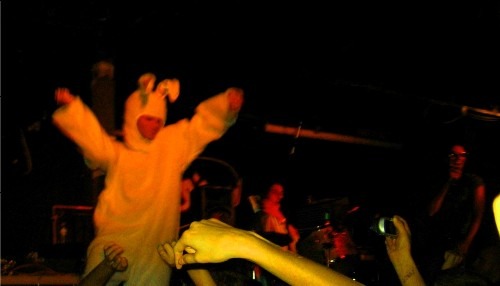