Though the most palpable influence on 2006’s The Trials Of Van Occupanther was 70s folk, Midlake is an indie band first. If the studio sound these days has echoes of arena-friendly Fleetwood Mac and Cat Stevens, the live set betrays the inner geek: these guys are still a bunch of music lovers, jazz students, electronic enthusiasts, playing tunes for the love of it. If the live show lacks some of the more obvious displays of wild energy that can make concerts fun and unpredictable, it’s not for lack of ambition. The bandmates show a subdued energy on stage, a simmering pot too well-minded to spill over.

Opening was Dawn Landes, a sprightly alt-country woman of the Patsy Cline/Jenny Lewis ilk, she and her band dressed in custom “Fireproof” (her album) jumpsuits. Accompanied only by cello, drums and her swangin’ guitar, she sang songs of good times and bad times, with names like “When We Were Young” and “Dark Clouds” and “Kids In A Play”. In between songs she danced around and joked with the audience, even being the first performer in recent times to make use of, or even acknowledge, the giant 4-foot disco ball hanging from the ceiling that is the Webster Hall trademark.

Halfway through the set the cellist broke out a flute and they do a quick, countrified cover of Peter Bjorn And John’s “Young Folks”.

“I can’t whistle,” she confessed.

Midlake as usual started off with the title track, “Van Occupanther,” but unlike in most shows these past years, they didn’t set the songs to a backdrop of old and home-made videos. The only thing behind them was a giant carpet bearing the cover art and central image of Occupanther: an autumn forest with grey skies, a man in a golden suit looking down at a seated figure in boots and a suede jacket, wearing a large, brooding panther mask. A 19th century feel, but this is more Oregon Trail than Little House on the Prairie: dark settler times where people very well could die, perhaps from dysentery.

It’s the sort of music you don’t even know if you should clap for, or if the proper response is more of a slow nod of the head. Vocalist Tim Smith sings with a kind of slightly-hunched grimace, the sort you’d imagine seeing on old-style country crooners, like the songs they were belting out were as hard on them as they are on us. He played an acoustic guitar halfway covered by duct tape.

After a few Occupanther songs they went into an older piece off Bamnan and Silvercork, an under-appreciated and seldom-played romp called “The Jungler”. The old songs are like that: instantly catchy, simple, with strong hooks and no b-sections, the choruses usually attached to the verse with no additional changes. The new songs are longer, not as catchy and harder to listen to, but are full of changes like an unfolding story rife with secrets, a progressive folk.

“The Jungler” is also where some technical problems started, with a set of keyboards not working at all until an aide slid on from backstage and replaced some nameless piece of electronics. Still it played with heavy feedback and a loose plug.

“Fix it!” someone in the audience yelled, when they paused after the song to take stock of the electronics.

“Fix it, he says.” Smith muttered back, “How do we fix it? We’re just musicians.”

“This is a debacle,” he said before going into a new song off the album they expect to record as soon as this final tour is over. The new song felt very Occupanther until the bridge, which turned harder and louder. Both the lead singer and the keyboardist sat at the same piano, banging away at four-handed noise.

Next was a cover of themselves, an all-Midlake version of the new Chemical Brothers song “The Pills Won’t Help You Now (featuring Midlake)”. Even the original feels more alt-folk than breakbeat, so it was hard to tell what, if any, differences there were (and what exactly the Chemical Brothers added in order to put their name in front of it).

After a few more Occupanther songs came a rarity: a song off their first EP, Milkmaid Grand Army. “I only expect hardcore fans to know this,” said Tim, but a number of people in the audience still recognized it to judge by the applause. They played “Excited But Not Enough”, one of the best songs on Milkmaid, with the heavy electronics of the early work but the brooding feel and long progressions of Occupanther.

The technical difficulties continued, even as Smith’s guitar strap broke before “Chasing after Deer”, forcing him to sit and strum the song like a true folk musician. Technical frustrations almost killed the encore but Midlake came back anyway, Smith confessing “We don’t deserve it, but thank you” to applause. They played fan favorite Kingfisher Pies, the hookiest, catchiest, most fun song on Bamnan, a song you can imagine hearing from They Might Be Giants if they grew up.

Years of playing have made their signature song different from the off-kilter fairy tale it used to be. Now it’s almost painful, the drums louder and faster, Smith’s voice straining into it like he were pleading his case to a social worker. 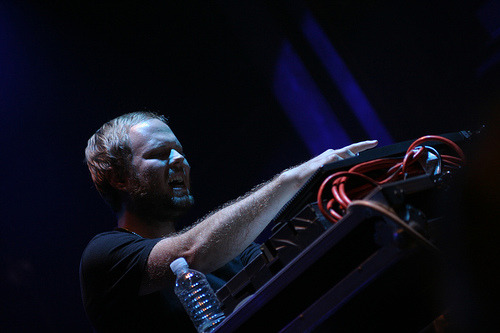