If there’s any group that has paid the dues necessary to climb aboard the indie-rock tidal wave, it’s Spoon. Formed in Austin, Texas back in 1993 by singer/guitarist Britt Daniel and drummer Jim Eno, Spoon bounced from label to label throughout the 90s, finally landing on Merge Records in 2000, where they have remained for their last four albums. Spoon was beaten to the top 40 by Modest Mouse, the Decemberists, Interpol, the Arcade Fire, and the Shins, but with the top 10 debut of Ga Ga Ga Ga Ga, and a stint of televised guest appearances culminating in October 6th’s Saturday Night Live, 2007 appears to be Spoon’s breakout year- and deservedly so.

With four members, and tracks that lean heavily on keyboardist Eric Harvey, Spoon achieves a distinct sound from their indie-rock contemporaries. The question is, how does this sound, this band, come across to an audience of 2,500 at the Riviera? The answer is: not so well.

Based on Friday night’s effort, Spoon simply does not have the stage presence required to turn in a good show at a mid-sized, indoor venue. Bassist Rob Pope, playing with the group for less than a year, appeared bolted to stage from first note of each song, going mechanically through an impeccable bass line while standing stock-still. Likewise, Harvey vanished behind whatever instrument he was playing, be it the keyboard or the guitar. Meanwhile, Daniel played stage-captain ‚Äì probably happy to be there, sometimes even “enthusiastic,” but without enough personality to drive the show.

The on-stage inactivity was especially strange when coupled with the fact that the band was clearly trying to pump some musical adrenaline into the audience. Each song Spoon played was a little bit faster and a lot louder than its studio version, and Daniel threw all his vocal energy into each of them. Four songs in, 2002’s “Small Stakes,” with a slick, uptempo keyboard riff, seemed poised to pull the audience out of the head-bobbing stage, but with “Jonathon Fisk” following, the band failed to capitalize. This isn’t to say the Spoon is a band you hurl yourself into a mosh pit for ‚Äì but one would hope for more than a sing-along at a rock show. Spoon spent much of the night moving from album to album, varying little from the studio versions except for the aforementioned tempo and volume. They sounded fine, but the Riviera is a theater that could make Don Gallucci sound like Vladimir Ashkenazy, and, as they closed with a cursory run-through of 2002’s “The Way We Get By,” the most memorable thing about the show appeared to be just how unmemorable it was.

The only interaction Spoon had with the audience was by means of Britt Daniel’s brief anecdote about the year he lived in Chicago, back when Spoon was performing “in front of an audience of ten.” Someone needs to clue them in on the fact that those days are gone. They’ve made it. Why aren’t they acting like it?

The answer is: not so well.Based on... 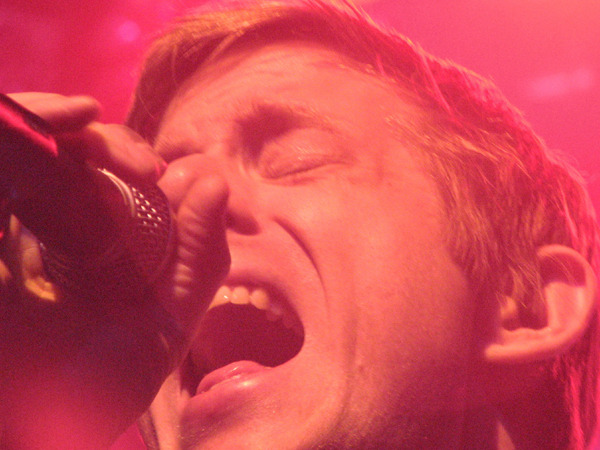