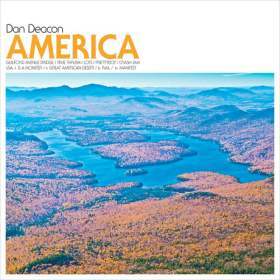 I remember first seeing pictures of Dan Deacon about five years ago, right around Spiderman of the Rings. Before I ever pushed play, I cut up magazine pictures of his gadgets-cum-instruments covered in colored tape and wired together on shaky tabletops, torn visages of his playful mix of nerdy wild child taped into spiral bound notepads. He seemed like an oddity, someone doing something memorable, and his music was no disappointment to that illusion.

Fast-forward to 2012, and Deacon’s computer-constructed sound has blatantly infiltrated everything, tearing off any remaining disguise and living comfortably in the commonplace, not due to Deacon himself but part of a larger sea change that set its roots long before Dan toddled. Now, it’s the heavy emphasis on acoustic sounds and featured orchestral musicians that make Deacon’s latest album, America, one of his most ambitious and memorable projects.

The latest melody for the American Dream is the sound of Dan Deacon’s big ambitions and bigger ideas hitting the cacophony of synthetic sound in modern America; imagined into a desertscape sucked dry and joyously singing. Deacon dreams America in a four- part epic on the B-side of his latest record, celebrating independent creation, voicing (if not audibly) discontent, and drawing moving pictures of our country’s inconsistent yet magnificent landscape at high speeds.

“USA I: Is a Monster” starts it off with a sprawling orchestral piece prominently featuring a heartfelt violin that could soundtrack faded images of war. Midway through, the song deconstructs into a pounding, glitch-y tribal beat, still hopeful and swelling, patriotic in a new sense of the word. The twitches transition into “USA II: The Great American Desert,” at first disjointed, like someone hacked into everyone’s cell phone in a crowded mall all at once, setting off all the ringers, then beatific. Dirty, layered, shot through with some choral calls like echoes from Leone, “The Great American Desert” churns and chugs, mixing uncertainty, curiosity, and discovery with an aura of illusion and the pounding hooves of a cavalry at your back.

After this sprawling symphony, the whimsical noodle beats of part three, “Rail,” are empty, as monotonous and bop-a-long as the intro credit music in Almost Famous. But the thunder returns for the final act: “USA IV: Manifest.” The momentum once again builds, rallying from the previous song, and America soars to a close: hopeful, victorious, and looking straight into the sun. The always-independent Deacon’s latest album acts like a true soundtrack or the embodiment of an emotion — its powerful mood augments your perspective on the outside world, changing physical reality first only for you, but soon by what you feed into it.