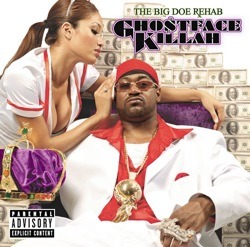 Ghostface Killah, the pseudonym king, returned in December with his seventh solo album, Big Doe Rehab, his third release over a two year span. Big Doe Rehab marks the fourth release for “James Bond of the Octagon” since he signed with Def Jam back in 2004. Def Jam seems to have been a real solid move for the Wally Champ. His first release for them, Pretty Toney, came in 2004, and had no real buzz surrounding its release. Regardless, it delivered solid production and, inevitably, Ghost delivered his vivid street tales and served up one classic in “Holla”.

Fishscale and More Fish both hit in 2006, proving succinctly that Ghost remained driven and wasn’t going anywhere any time soon. The albums saw multiple production spots from Mr. Metal Fingerz Doom, Pete Rock, Just Blaze, and the late Dilla, to name a few. The many who viewed this output as his best work since Clientele had a good argument until December 11, 2007 when BDR arrived to change all that. This is “Mighty Healthy” Ghost. Those who know his work will know what that means. Starks is focused on the flow like we haven’t seen in a while. It’s hard to pick a single track or a particular flow that stands out from the others; this is Ghost bringing it on every single verse with a youthful intensity he’s managed to hold onto while simultaneously developing a grown folk’s wisdom.

Many wonder how an emcee like Ghost can stay sharp with his darts for so long. Obviously it starts with a god-given talent on the mic: the voice, the wit, the flow, are largely unparalleled. But you’ve got to have more than personal greatness to sustain a hip hop career. Many of the best emcees out there right now, not speaking in terms of sales of course, have a talent for picking what beats to spit over.

While this isn’t a factor a hungry emcee can afford to look over, the ability to be discerning is a luxury of veterans. Without name dropping, it’s the sad truth that too many emcees have fallen in the face of lackluster production: once the production goes, the emcee’s career shortly follows. That leaves it to some of better beat miners of today to pick up the slack: Ghost, Jay, Sean Price, Common, De La, Scarface, Kweli, to name a few.

With that said, Ghost has collected seventeen more tracks that ride comfortably under his sharp delivery. Production from LV & Sean C deliver some of the dopest cuts on the album, including the first single “We Celebrate”, featuring hype man Kid Capri. Of course many of the Wu affiliates contribute work, and there’s a smart verse from Ghost’s own son, Sun God, on the track “Yapp City”. Though the melodic Ghost we all have grown to love does show up sporadically, it is the sharp dart-throwing, big chain hangin’, Wally Champ we first fell in love with that dominates this album. One of its brightest moments is his rendition of Johnny Guitar Watson’s “Superman Lover”, originally brought to light by Redman in his “Soopaman Luva” adventures, back on Red’s first album.