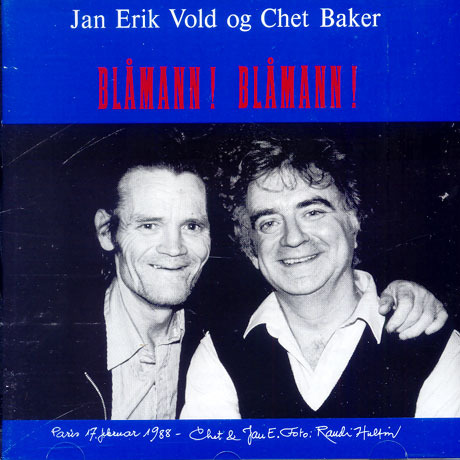 This very strange and troubled record is among the last recording sessions of Chet Baker’s life (born Chesney Henry Baker, Jr.). Recorded in Paris in February 1988, it was a mere three months after this session wrapped that Baker died when he fell out of his Paris hotel room window, and landed on the concrete two stories below.

As it turns out, this is also one of the most unusual records Chet ever recorded, with anyone, anywhere.

Obviously, at this point in his life we’re not getting the real Chet Baker. He’s got no front teeth as a result of years of heroin abuse, and a physical assault he had suffered years before. He eventually learned to play with dentures, but it’s evident he can’t really blow his horn all that well anymore. His energy level is low, but he gives it a go and comes up with more than a few memorable moments. The real problem is the out-of-place vocals of Norwegian poet Jan Erik Vold. His irritating and off-key vocal eruptions litter every damn song.

With Baker on trumpet, the very talented Egil Kapstad on piano, Philip Catherine on guitar and Terje Venaas on bass, the band performs an assortment of jazz numbers that show off some solid chops from Capstad and Catherine. But they go all catty-wampus whenever Vold suddenly appears doing these abstract poetical experiments, blurting out some tuneless talking-segments, like a song over a song, but not, with his thick accent and clumsy phrasing, atop whatever the band happens to be playing at the time. Even the guttural sounds of the particular words he uses are a distraction.

While that may be part of their experiment, Vold is not really the right poet/vocalist for the job, and his awkwardness upsets the whole apple cart. “Children’s Waltz”/“JEG SER” has Vold tumbling out obtrusive words like a madman, and burying the entire waltz in verbal nonsense. On “How High the Moon”/“KOAN FOR EN KULTURBYRAKRAT” he goes over the top and the song buried underneath struggles to be heard at all. When the band really gets it together on “Body & Soul”/”WIGWAM” it just degenerates into foolishness, as you’re waiting for Vold to do something musical with his “instrument.”

When Baker finally makes a solo appearance on trumpet it’s usually quite strained, and painful to listen to, as he musters up every bit of strength to get his ideas out. Even the black and white photos of him and the band in the studio show a Chet Baker who looks twenty years older than his age. Frankly, he looks like a near-dead old cowboy from a Spaghetti western, who just doesn’t know when to kick.

The cohesiveness of the band in this informal setting definitely comes through on “Love For Sale”/”6HEKT,” and although Baker’s playing is weak and breathy throughout the session, there are a few passages where the younger Chet emerges, ever so briefly, and he sounds genuinely inspired again.

In his final years Chet did record some excellent music, although critics love to poke fun at his toothless persona, but it’s a shame this is one of the last documents of his art. It’s a fascinating document, but its concept blurs Chet’s contribution to the point of afterthought. It’s clear, now, that Chet was happiest when he was playing music. When he fell out of that Paris window we lost a completely authentic, one of a kind human being, and an artist the likes of which we’ll never hear from again. Peace, brother.