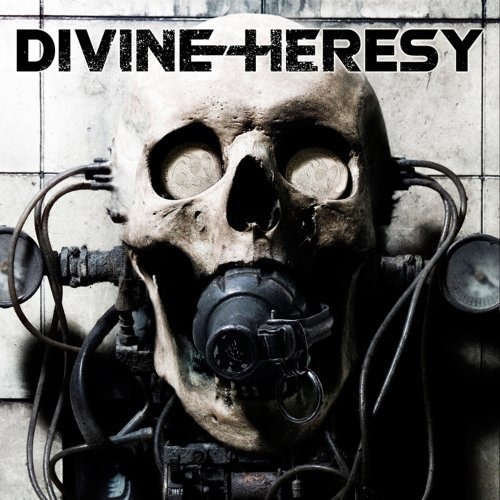 The press photo for Divine Heresy’s debut tells pretty much all one needs to know about this ad-hoc band curated by former Fear Factory guitarist Dino Cazares. In the middle, lead singer Tommy Vext (née Cummings), big as a brontosaurus, his hands doing some sort of kung-fu greeting. To the right, drummer Tommy Yeung, with hair straight out of a Pantene commercial, muscle shirt, and patently Southern California leer-glare. To his left, the goatee’d rotundity of Dino himself.

These are not men built for, as slang goes, fuckin’ around. Dino was known for his uncompromising, beat-you-to-death-with-power-chords axe slinging in Fear Factory, perhaps the most elegantly beat-you-to-death band in the beat-you-to-death genre. But it’s been five years since he left FF, and Divine Heresy, for all its attempts to re-invent Dino’s career, doesn’t quite feel like a legacy.

For one thing, the sound is flat. Metal needs to be big. If it ain’t big it’s nothing, and largeness isn’t so much about volume as it is about density—there’s got to be a lot of noise pumped into that amp, even before it’s turned up to eleven. On Bleed The Fifth, Dino’s semi-automatic 8-string tries to carry everything, with Yeung’s double bass mainly echoing the lower register. And even with his impressive fretwork, the guitar sounds small when left to fend for itself. Vext is almost an afterthought, which might not be a bad thing since, despite his imposing presence (think Vin Diesel sans whimsy), he has a fairly uninteresting voice.

The title track opens the album nice and heavy with a riff straight out of the glory days of death metal that, coupled with a Doom-esque sound effect, has the warm feel of the early 90s. Then it breaks into the weirdly 80s verse and a chorus that could have been penned by Henry Rollins: “Bleed the fifth! Face strike fist!” It’s a fun track, with a blithe sense of inconsistency that could have built into something if they kept with it.

The rest of the tracks don’t keep to the same creativity, though. There are good moments, like when “Rise of the Scorned” opens with delicate South American guitar styling then explodes into thunderous drums and a bloodless, vocally-swimming chorus. “False Gospel” worthily hearkens back to FF’s Demanufacture days. And “The Threat Is Real”, despite some cheap vocal effects, is a powerful bit of doom and gloom.

The most nü-metal moment comes at the end, a silly song called “Closure” which proves that Vext is far more at home in growling than he is at wailing. It feels like an attempt at a radio-friendly single, and maybe it is, considering what gets on the radio these days.

As a Fear Factory imitator, Divine Heresy holds up, if only for those fans who have been underwhelmed by the post-Dino era (which is the majority of them). It doesn’t manage, or even seriously attempt, to match FF in their heyday, but there are ideas in here worth looking at. And, as always, Dino kicks ass. Hopefully his next project will team him up with collaborators more able, or at least more willing, to steal a bit of his spotlight.