Businessmen and Ghosts – Working For A Nuclear Free City 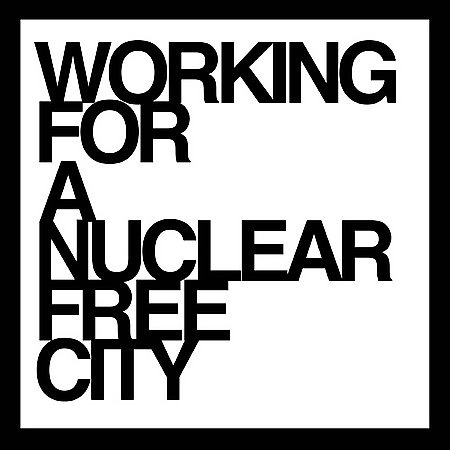 Picture this, if you will: It’s a dark and foggy Manchester night in early 2006. Under the seclusion of the trees in Sackville Park, two lovers have agreed to secretly meet. As we pan in closer, it appears to be none other than an anthropomorphic Kid A fucking the brains out of an anthropomorphic OK Computer. Yikes. Nine months later, OK Computer gives birth to a lovechild that the pair have agreed to name “Working For A Nuclear Free City,” the debut album of the eponymous Manchester-based foursome. And this kid likes to dance.

Alright; metaphor over. It’s a year later, and WfaNFC has arrived in the USA in the form of the double-album, Businessmen And Ghosts (ostensibly the original release plus a whole album’s worth of additional tracks). While some might complain that Businessmen lacks sonic originality, they would have to agree that WfaNFC compensates nicely with Ed Hulme’s stellar bass licks, electronic percussion loops that are pleasantly non-aggravating, and Gary Mclure’s solid guitar work.

From the first full-length song, “Troubled Son”, and its two-note bass-line, you want to say that you’ve heard this stuff before, at the same time that you know you haven’t. By the time Hulme drawls “Dead fingers talking / barefoot boy walking / … what’s on the TV?” in the excellent, psychedelic electro-dance track, “Dead Fingers Talking”, the band has somehow successfully secured your attention for the disc’s remaining forty-five minutes. Other highlights include the nostalgically upbeat “Sarah Dreams of Summer,” and “All American Taste” – satisfyingly confusing in 8/6.

Of course, there has to be a catch. WfaNFC’s flaw lies in the double-album feeling rather overproduced. By the second disc, the constant vocal reverb has become taxing, and bloated songs such as “Innocence,” and “England” could do with being stripped down. However, this shouldn’t keep listeners from waiting with alacrity for whatever Working For A Nuclear Free City brings us next. The group has no plans to come stateside in the near future, which is unfortunate – this is a sound that a lot of American twenty-somethings dig. Perhaps when they finally decide to leap across the pond, they won’t lean so heavily on the mixer, and just play.