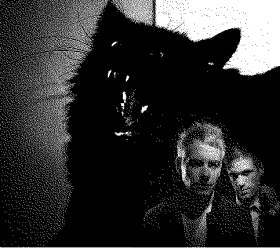 Casy & Brian’s first release was a deliberately obstinate, raucous electro-punk record entitled Catbees that was reportedly conceived as a reaction what they considered Seattle’s tepid musical climate in the mid-2000’s. After a move to Oakland and consistent gigging primarily in the locale’s brimming subterranean spaces, Casy & Brian have delivered a new 5-song cassette EP boasting dramatic fidelity improvements, subtle cheekiness and the outlandish bizarreness one would expect from untrained musicians inserting lofty ideas into basic dance-rock.

When the group was formed, neither member could play an instrument. They seemed equally interested in using the band as a vessel for exploring ideas and making statements as they were in developing musicianship. They selected a basic keyboard, an improvised drum set and began experimenting immediately. On their latest offering, the synth/drum machine combo is retained, only their use is more restrained. Their tracks are allotted more sonic space and they never verge into chaotic oblivion as before. This benefits the duo greatly since their inclination towards hyper-rambunctious 4-on-the-floor dance rock blossoms into a force greater than the sum of its parts and listeners are able to focus on the singing.

The high-strung vocals are drenched in a flippant attitude conveying the persistence of a party in their delivery, but something much more unusual in their content. All of the lyrics for this EP were hijacked from various non-fiction sources like operating manuals, or documentaries. Their music lends itself well to the direct commands in instruction booklets and once listeners begin to grapple with the words, the music is elevated to a different level of intrigue. The words to “Understanding Sound” are appropriated from a textbook on sonic physics, “Greetings Int’l” explains saying “hello” in different languages and “Now You’re Dancing” seems to be inspired by dance instructions and some sort of manual on club etiquette. The subject matter of these can certainly be connected to the diverse, party-centric culture that Casy & Brian align themselves with, but their means of exploring it pose many questions. Are they criticizing the endlessly rehashed formulas of youth-culture? Do they consider lyrics irrelevant to dance music?

Casy & Brian’s artistic posturing in their unconventional lyrical decision is intriguing, but their songs stand alone. “Rumble in the Jungle” is a herky-jerky exercise in frenetic rhythms and grating, trebly tones that recalls what critics meant when they wrote “post- punk” in 2002, when it was danceable. “Now You’re Dancing,” treads similar territory, only with an emphasized crudeness and immediacy, a quality often arising in groups more comfortable performing at clandestine warehouse parties than slick clubs. The EP’s first track and single, “Understanding Sound” casually hones percolating synth melodies with a raw industrial backbone that the groups forthcoming LP is likely to resemble.

The strangulated, impassioned delivery of lines like “THAZ WASSUP GIRL,” occasional primal screams and the EP’s cover depicting Casy & Brian in stark black and white with a massive shrieking cat behind them all indicate a particular cheekiness. They have a keen sense of humor to accompany perplexing artistic decisions and, even without the art-damage; their music will certainly incite a fierce dance party.