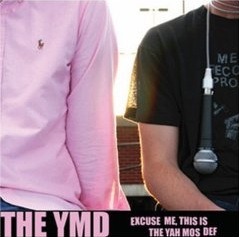 Shit, if it’s going to be this kind of party, with two new b-boys on the scene making with the freak-freak, I’m sticking my dick in the new potatoes.

Yah Mos Def’s debut full length, Excuse Me, This Is the Yah Mos Def, bears a highly familiar sound, but it’s refreshing to have finally found a revitalizing direction in unpolished, low-budget recordings. On “Charles Maggio’s Real Last Name is Ash” the YMD chant “causing hysteria, on, on the stereo” and it is a fitting introduction to the funky punk rap these two bring to each song. Front to back, the YMD assault eardrums, demanding that motherfuckers get with the program.

Shouting out every neighborhood in Philadelphia on “New Direction,” the YMD command attention by borrowing a style originated by the Beastie Boys circa Check Your Head and Ill Communication, blurring the lines between punk and hip hop. Sampling Minor Threat, Bikini Kill and Cap’n Jazz, the YMD bring the big beat matched with quirky rhymes heavy in reference. Never complex or intricate in wordplay, B. Awesome and Distro stick to what they know, talking shit, flowing on point and referencing NBA legends to describe their rhyme style. As Distro blacks out with the flow on “New Direction” he reminds us all that “ya’ll don’t wanna mess with the Yah Mos Def / You know my shit list is way longer than my guest list / You can come and test this / Straight A’s, teacher’s pet shit / YMD writing text books on how to wreck shit.”

It is difficult to ignore the obvious comparison when B. Awesome and Distro have chemistry and vocal stylings reminiscent of Ad Rock and MCA (omitting Mike D); in addition, the two record with heavily distorted vocal effects popularized on “So Whatcha Want” and “B-Boys Making with the Freak-Freak.”

The strength in YMD comes from tracing a blueprint, then painting with wild style over it, until it is barely recognizable. The YMD gives me hope that if it’s possible to revamp my favorite Beasties era, then an actual Native Tongues/De La Soul second coming of happy young black men rapping over obscure yodeling samples could still happen.