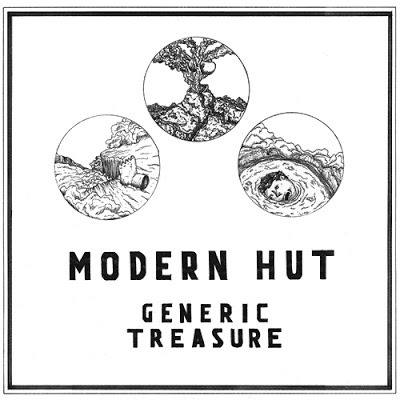 Your dog died. Your woman left you. Your bills are overdue, your truck broke down, and your roof is leaking. In a moment of despair, you turn to Modern Hut’s Joe Steinhardt, your friend and ex-drinking buddy, for a little comfort. But this friend won’t try to cheer you up. He’s born without a taste for life, doesn’t know what to do with his time, and isn’t proud of the things he’s done. He consoles himself with the knowledge of his own mortality, and gives you this advice: “Don’t expect too much from life.” When you tell him that’s fucked up and sad, he simply replies, “Isn’t life?”

Before you turn your nose up at Steinhardt’s Negative Nancy noodling, remember that you need that friend. We all need that friend – the one that doesn’t make us ashamed of being sad or who tries to brush off our more existential angst with a “case of the Mondays” giggle [insert Office Space-style rage here]. In the down-turned lines and bare-bones strum-strumming of Modern Hut’s debut, Generic Treasure, live the rainy days you want to swim in – the days made less for waking than wallowing – and the implicit permission to freely wonder what the fuck it’s all for.

Steinhardt doesn’t paint a smile, nor does he manufacture an over-done crocodile tear. Guy’s just frankly, refreshingly sad about the ordinary stuff that makes us all sad, and Generic Treasure is some much-needed time spent in a funk so funky that George Clinton don’t know how funky it gets. Whether it’s missing a girl, moaning about the meaning of life, or overturning rocks to find more and more pointlessness and error, Modern Hut knows how to find the dark muck and paint pretty stick figures in the sod. But it’s not all shadows and sullenness. Within his folksy, downer tunes, Steinhardt’s little quips and witticisms create sly smiles, even in Generic Treasures’ most bereft breakdowns. In “Time,” he repeatedly tells us what everyone tells him, contrasted with his own perspective of himself, until at the very end, he cracks, “Everyone tells me that I should give up, and I do.”

As a Don Giovanni Records co-founder – the same label that released Modern Hut’s debut – some might accuse Steinhardt of a vanity record. But after listening to his Modern Lovers-meets-Syd Barrett on Xanax stylings (produced by Screaming Females’ Marissa Paternoster, who also joins Steinhardt for a duet and plays support on the record), it’s easier to imagine the man smashing a vanity than reveling in it. Timeless and generic in the sense that it’s the pits we all have (aside from the arms), the somewhat depressing but darkly enjoyable debut celebrates circular, negative thinking better than two shots of barrel-bottom whiskey.