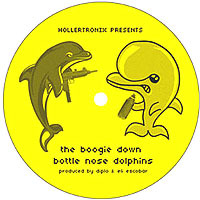 Hollertronix is keeping their new mixtape strictly for its DJs with a vinyl only release. Opening with the signature synths of Kim Carnes’ major 80s hit “Bette Davis Eyes” could’ve been a slow ballad mash up instead of the usual Hollertronix chronic twitching of mixing. It had me waiting for a sudden shift into Berlin’s “Take My Breath Away,” but the Tronix chose to contrast the soft sound with “Pop, Lock and Drop It”.

It’s almost predictable that the tapes include a 2007 dance standard, Justice’s “D.A.N.C.E.” But, I still cannot get enough of those kids’ spelling bee commands reminding me that this song is D.O.P.E.

The mix hits its stride with the hilariously titled “Groove is in the Dick”, sampling Deee-lite’s jazzy house dance hit “Groove is in the Heart.” It also features the silly sounds of childhood noise makers… Do you remember those plastic sticks that had holes in the end with a whistle that went up and down inside, the ones that signaled cartoon banana-slip bloopers? Well, Diplo uses that sound.

After Deee-lite’s groove, Hollertronix leave the one-hit wonders and mixes up the king of pop’s “Smooth Criminal.” Diplo matches MJ’s rapid singing to a dancy bass and hand clap break beat. And because no one can get enough of Kanye and Daft Punk, Hollertronix chops up “Harder, Better, Faster, Stronger”, enticing the dance floor to “work it harder” and harder, if possible.

In the past these mixtapes probably had mass appeal for parties, something to throw on after Girl Talk to keep the speed freak party alive, but this mixtape clocks in at 27 minutes. Granted, it is a quickie for those with ADD. It is also short enough to completely forget you even listened to it. But the point, from what I’m inferring, is to give DJs something to throw on, some shake-n-bake mix to insert into their own sets, appealing to both the older and younger crowd at the discothèque.