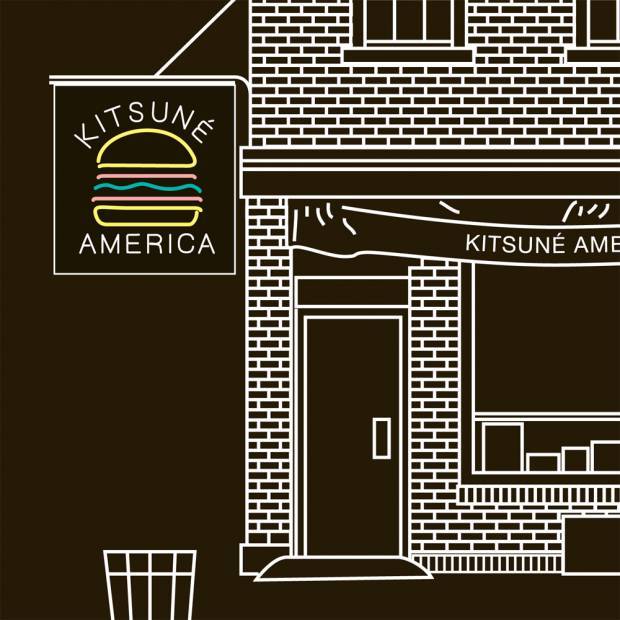 On the heels of the recent grand opening of Maison Kitsuné at Broadway and West 28th, the Kitsuné America compilation presents a selection of the clothesline/label’s favorite tracks from the States. Co-founder Gildas Loaëc of the clothing line and label has had his ear to the ground for up and coming electronic dance wizards and beat producers since his days of working at a record shop where he met his partner Masaya Kuroki and the textile / music label was born. Through the 14 tracks on Kitsuné America, the aesthetic of their brand of couture and grooves of distinction are extended to a mix of strictly stateside artists that are enjoyed by the Japanese-Parisian tastemakers.

Community/comedic star Doald Glover aka Childish Gambino gives the sparse “I want you to know whenever you are around I can’t speak” club croon on “Heartbeat (Them Jeans remix),” a welcomed alternative to any of the OFWGKTA parodies that I would not mind waking up to on an alarm clock set to KTU 103.5. Props to Them Jeans for providing the piano subtleties that keep the track light on the psyche but with a pulse to toe tap or accompany a hot slow brewed roast in the early AM.

Computer Magic brings those lazer and buzzy synths on “Help Me” while Dwntwn’s “See My Eyes” mashes mainstreamed dance music vocal affectations but with a beat and key structure that only gets pumped full of bliss before the 4 and a half minute mark. Bonus points for mixing religious iconographies with cell phone drama and inevitable reckoning; “You stopped taking my calls, the Saints Peter and Paul, you were never mine at all.” Emil & Friends sows some electro chill on “Royal Oats” with plenty of “ahhhh” choruses while Frances Rose brings more complicated phone drama over with questions of nocturnal orientations such as, ‘are you a “Vampire?”

Gilgamesh offers the boutique beat in big with “Your Body” sounding fresh off of a Mixmag-blessed white label pressing, while Giraffage brings sped up Xxyyxx vocals for a chill out escape to the lounge with “Even Though.” Heartsrevolution upsets the tranquil atmosphere with blaring guitars and vocal girl grit on the high petrol grade party fouler, “Retrograde.” Oliver's “Walk With Me” busts out the jogging sweatsuits suitable for the track, gym or the couch and Poindexter’s “Helpless” gives nods to the past 13-years of American appreciated Franco pop.

Selebrities’ “Regret” makes the feeling sound like the most coveted state from moments captured by keyboards held over from neon flashbacks to a time when the compact disc was the mp3 of the day before the bath house beats of St. Lucia bring you poolside with “Before the Dive.” White Shadow unleashes straight electric house currents with “If you Like it,” XXXChange “F*ck Yeah Ace of Hearts” is an exercise in contemporary demonstration of our Abelton HD audio blasts of vocal chops, as notes sustain at dome piercing frequencies and an exhibition of restraint while entertaining dub step flirtations with a few of those whirring drum zaps.

Tracks from in-house artists like Computer Magic with “Help Me,” Dwntwn's “See My Eyes” present the fresh sound of Kitsuné through synth and sequence innovations that reflect the direction of today's beats. Selebrities bring their Cascine contributions pushing the dance envelope forward by selecting keys and production styles from a few decades back that resound with the now. Gilgamesh's “Your Body” tricks out vintage house music kicks with some new tricks while White Shadow and Oliver present familiar dance music retreads. Other moments that present contemporary trends in electronic arrangement but fail to fully ignite like Giraffage with Xxyyxx on “Even Though” that keeps you waiting for any semblance of a change up, build up or break down of interest that never arrives. It is also curious as to why Childish Gambino starts off the compilation doing a few lover's rock vocal spots but we presume this is a moment to shine a light on the mixing talents of LA's Them Jeans while pandering to mainstream listeners with the inclusion of Mr. Glover.

We surmise that Kitsuné went for variety with this compilation over consistency by overlooking their own strengths as selectors and purveyors of ground breaking music movements for the past 10 years. Their inclusion of Heartsrevolution’s rocking “Retrograde” stands out from the discoball permutations on the compilation leaving the listening audience hungry and interested to hear a few more current rock and roll jams favored by Gildas and Masayas in their survey of the American pop underground applicable to the Kitsuné code. By showcasing a variety of the dance underground bubbling to the earth above, Kitsuné America delivers on the sound of today’s electronic dance movements and styles.That said we look forward to hearing Kitsuné America Vol. 2.