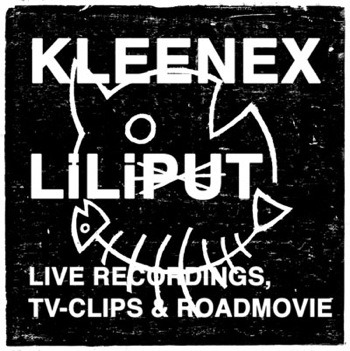 I have always wanted to experience Kleenex/LiLiPUT live. My earliest acquaintance with them was from a Rough Trade mix from a decade ago and I was smitten, intrigued, even thinking for a moment that they were part of 2001’s New York post-punk fad. Hearing and learning more, their wild, DIY-dadaist, fun loving sound gave a dimension to punk that knocked The Slit’s Cut off my shelf and rivaled PIL’s Second Edition’s perfection. The good people at Kill Rock Stars have done it again, giving us Kleenex/Liliput Live Recordings, TV-Clips & Roadmovie CD and DVD.

The concerts present the band in their first through their last
incarnations as Kleenex at the Gaskessel in Biel and as LiLiPUT live at
the Tonmodern, Rote Fabrik in Zürich.

The audio recording of Kleenex in 1979 lacks conventional EQ-ing, but rewards the listener with previously unreleased songs. New (so to speak) song “Geierwally” begins with yelling before kicking into a four quarter hop that makes the current crop of indie dancers look like they’re trying too hard. The other new jam,” Pink Hit” begins with a “Blank Generation” progression before turning into a different hopped-up beast one minute through a song that only comes in at 1:42. “Ain’t You” exhibits that same tempo and key shift a minute and a half through and also at the song's end. Klaudia Schiff thumps some heavy dubby bass on “Beri-Beri,” “1978” gets an awesome lead in with the year numbers recited in German, “Madness” shows off the girls more “Transmission” side while exhibiting a shouting- then-brooding- then-shrieking feminine toughness courtesy of then front woman Regula Sing. Then you hear them stomping through the chanting motions in “Lust,” while “Nice” grooves with an untold coolness. “Ü” features more great bass from Klaudia, careening into the screaming “Hedi’s Head” throbbing with, “Hedi’s head, is so bad, Hedi is, oh so sad.”

Flashing forward to 1982, the band’s name Kleenex forcibly changed to LiLiPUT due to the threat of a suit by Kleenex, a Swiss tampon
brand, Regula has left and Astrid Spirit has taken the lead in this concert from Zürich. The quality of the recording is sharper, most likely taken from the sound board, from where you can savor the group’s evolution. You can hear the tighter drum and bass grooves on “In a Mess,” while liberating yelling and shrieking opens the hypnotic pogo au go-go “Do You Mind My Dream” and the “I’m terrified of ghosts like you” refrain propels the galloping minor keys on “Terrified.” The melancholic “tears came to his eyes” lament on “Might is Right” might make a grown man cry while the Francophonic “Étoile” is rich with moody “do do do do wahs.” “Boatsong” segues into the up-tempo hedonism of “Take a Taste of My Mind” and “The Jatz” takes on a funky life of its own.

“Like Or Lump It” brings the girls back to fighting form, doubling their attitude with angular guitar strums on “His Head All Red” while “Yours is Mine” hums with slickness and “Tschik-Mo” revisits the band’s adoration of Joy Division with a semi-subtle “She’s Lost Control” homage that would please the specter of Martin Hannett. “You Did It” jumps in perpetual motion with “o-o-o-open your heart!” commanded over the audience as the evening draws to a close. However, the end of the Zurich concert presents the (unreleased until now) bouncy “Where Do You Find the Time,” followed by a track that captures the band in their most melancholic state on record. Curious, I sent Marlene Marder an e-mail about the puzzling track at the end of the live disk, to which she explained, “Liliput’s very last song 'Tempered Feelings’ was performed only once at the farewell concert. (Which was somewhere else and has nothing to do with the live performance on this CD).”

The DVD features Kleenex in 1978, performing for Swiss television with then lead singer Regula Sing. They rock like glam punks through classics like “Beri-Beri,” “Nice” and “Hedi's Head.” The Liliput era TV clips show the band with Chirgle Freund at the helm with “Die Matrosen” from 1980, “Turk/Split” from 1980 and “Boatsong” performed in 1983. I was disappointed at first when I saw that “Turk/Split” was not on the live CD, only to be enthralled by the song’s live energy on the DVD video.

Their legendary Road Movie is a half hour Super 8 film montage of LiLiPUT’s European tour from 1982. You see Astrid Spirit, Beat Schlatter, Marlene Marder, Klaudia Schiff and company riding their tour bus around Heidelberg, Switzerland, Köln, Hamburg etcetera. The only audio you hear over the film collage are a roll call of their songs: “Outburst,” “Might is Right,” “Like Or Lump It,” ” Ichor,” “The Jatz,” “Tong Tong,” “A Silver Key Can Open an Iron Lock Somewhere,” “Yours is Mine,” “Ring a Ding Dong,” “Blue is All in Rush”. The whimsicality of the captured excursions give the feeling that you're along for the 1982 tour and for half an hour you can admire the girls’ cool haircuts, kinetic t.v. clip cut-ups, doodlings and the captivating and creative stop action jump cuts.

For those acquainted with Kleenex/LiLiPUT, this is a must. For the casual post-punk listener who might have heard “Ain't You” on some mixtape from an ex-whatever; this sound and vision experience is also a must.