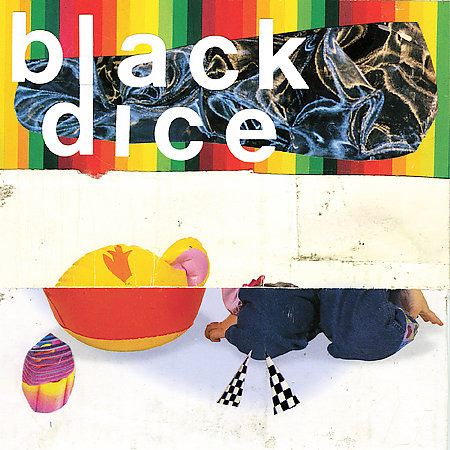 Load Blown is the fourth full album by noise-rock legends and Brooklyn residents Black Dice. I say ‘noise-rock’ but really anything remotely ‘rock’ has all but disappeared from their sound. Long gone are their thrashy roots, likewise most of the bleepy bliss-out stuff from Beaches & Canyons. While having more in common with 2005’s Broken Ear Record, all overt guitar use has now been expunged (with one notable exception). What remains is a mewling, clanking, hissing machine-funk that is, I must say, really quite awesome. In fact, this record comprises some of the band’s most accessible work so far. Picking up where tracks like “Smiling Off” (Broken Ear Record) left off, Black Dice continue to push that storming noise-electro boat out. Shredded drum machines lock with dissonant rave riffs and heavy industrial percussion; pistons hiss, synths grind, unidentifiable machine-parts spit, splutter and punch. All of which sounds like a particularly lairy robot drunk on about three gallons of distilled motor oil lumbering round a bar-room leaving you unsure whether to try and dance with him or run for cover.

At least, that’s what the first half of the album sounds like. On “Drool”, the sixth track of ten, Black Dice head Middle East-wards. A synth-flute floats deliciously and exotically over trancing percussion, two kick drums playing off each other across the stereo field, likewise a couple of castanets, while a skrunking percussive analogue squelch sits in the center, farting away wonderfully, locking the piece together with rubbery guile. Sort of like “The Dance Of The Seven Veils” as performed by a bunch of giant mechanical alien lobsters in outer space. Album-closer “Manoman” explores similar territory, featuring a chopped up, vocally-produced drone over tasty electro-exotic percussion, to intoxicating effect. Hilariously, this track occasionally breaks into gabba.

My personal favorite tune falls in the first half of the album. It's called “Scavenger”. It begins with a typically abrasive distorted robot-funk percussion riff. This then gets played off polyrhythmically with a lolloping shuffle beat played on sheet metal and a two-chord guitar (there it is) motif. Then some rock ‘n roll vocals, excessive snap-back delay and everything, start crooning away and it becomes clear what these wonderful, charming, lovely machines are doing: they are trying to cover Status Quo! Only then this huge electronic dinosaur jabs his claw through the texture and rips it apart as though it were canvas. This tune shreds.

Load Blown is a great album. Some might say it could have done with a bit more editorial trimming, but I’ve always liked the way Black Dice always stick a bit of not strictly necessary material into their releases as it seems symptomatic of their lovable hurly-burly attitude. Others might be disappointed that five out of the ten tracks here have already been released on EPs. Still, “Scavenger” hasn’t and that tune on its own might make it a worthwhile investment. A highly recommended slice of filthy electro grit cake.