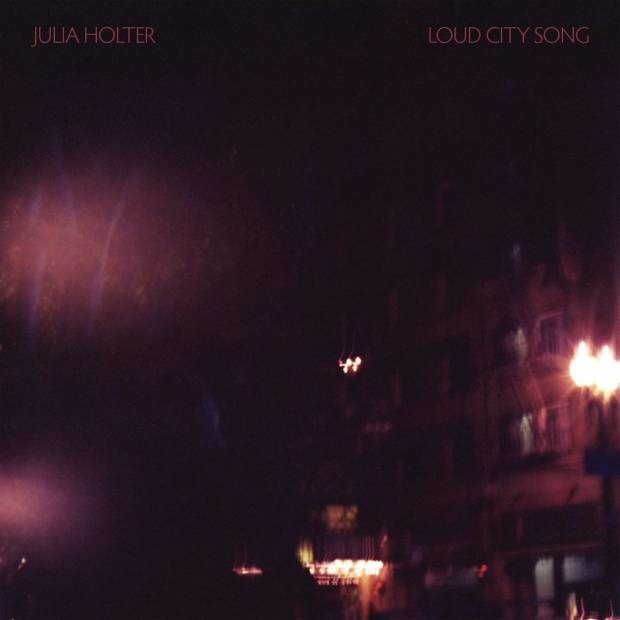 Julia Holter left us last with the ecstatic folk spun visions of Ekstasis. The previous amor of “Moni Mon Amie” is traded for new distortions from field found sound and recordings that bring new places and towns to explore. For example, Holter utilizes the Parisian restaurant Maxim’s as a backdrop conceptual set piece, borrowed from the musical Gigi that brings to life a Paris like city of her own construction. But you need not to be familiar with the inspired musical as a prerequisite, as here Julia takes her sound from those previous more hidden chambers and into the urban environs that make up Loud City Song.

Where Ekstasis existed in an ephemeral space of post-classical beauty; Loud City Song turns that volume up on the surrounding concrete plans and terrains, on the opener “World”. Holter's method of conveying vocal beauty through the tested maximum experimental approach takes on darker garments, which sound in the company of contemporaries like Austra, Chelsea Wolfe, Louise Burns, Mozart’s Sister, Nite Jewel, TRUST, Zola Jesus, and such. The running rush with tape recorder in toe-opening of “Horns Surrounding Me”, feels like a panicked dash through a claustrophobic humid NYC sidewalk in the Lower East Side, The Latin Quarter of Paris, or maybe West Hollywood, where the touting taunt of horns take on a the character of tenements closing in on Julia’s protagonist. The metropolitan muse gets spun around in the synth jazz crescendo of “In the Green Wild”, where Julia takes on her best mix of café style song and spoken word that share the memorable poetic lines like, “there’s a flavor to the sound of walking that no one ever noticed before”. “Hello Stranger” marries those sustained sounds associated with synthesizers with a stringed arranged chance meeting of strangers in the night.

The night vibe carries on with “Maxims II” that works in drawn out measures where starts and stops signal the progressions forward. While the ambition of the sparse, but big on concept and sound when and where need be borders on indulgent pretension; but you are still awarded next with the breathtaking and effective acoustic piano presence and stark minimalism of, “He’s Running Through My Eyes”. Julia takes her musical leanings from both town and country to the darkened corridors and empty boulevards of “This Is a True Heart”, where the choral synth ambience meets jazz trio touches, complete with sounds from the sidewalks and streets. “City Appearing” reinforces all the former motifs of Julia’s visions of real (or maybe imagined, like in the opening line of “maybe trouble, maybe fantasy”) and make-believe urban settings, hats, personification and horns. As a closing number that ties up the various places and sounds visited on the album, the focus here feels half-awake and half-baked as these clusters of revisitations appear and occur by a happenstance nature.

Here on her third album, Julia Holter takes her CalArts learning from Tragedy, and Ekstasis for the condensed economy of Loud City Song. The achievement here is the new economy of sound Julia works within, where sometimes the plot feels lost in the song cycle elaborations of “Maxims I & II”, but ultimately as a complete work tightens a musical grip between the modernist schools that explore the eclectic span of societal norms with the adaptive comparative lens of smart, choral, post-modern jazz tales.