6 Feet Beneath The Moon – King Krule 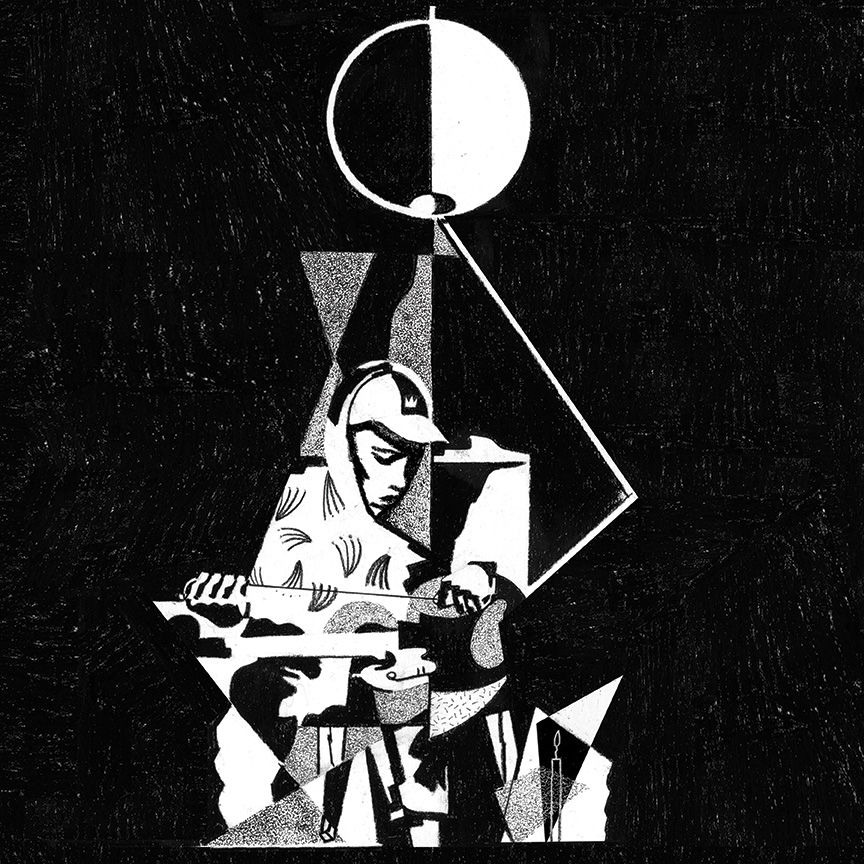 On tour to support The Hardest Way to Make An Easy Living, Mike Skinner, the force behind defunct British rap output The Streets, performed in Manhattan and spent an unlikely amount of stage time talking about how he’d be running the New York Marathon that fall. Though he’d been taking long pulls from a bottle of Jameson all night, the crowd reacted with giggles not to Skinner’s probable unpreparedness, but to the way he was pronouncing “marathon,”—a sharp, underemphasized “maa-ra-THIN.” His accented English, straight from the corner chipshop through a filter of Super Tennents and Benson & Hedges, was a novelty to the crowd; rough, caustic, and lacking in the posh diction of Colin Firth or Hugh Grant, both staples of the early aughts romcom circuit. Matching his hustle-heavy, garage-rap sound, Skinner aims to represent a side of England that a wide American audience is unfamiliar with and doesn’t quite understand; terms like “chav,” “fit,” and the loosely defined “cor!” pepper his songs and are all enunciated with Midlands punch. Skinner chose The Streets moniker for good reason, and when he defuncted the project in 2011, it seemed very unlikely indeed that the baton would find itself in the hands of then 17-year-old Archy Marshall, a loud, jazzy crooner whose varied projects (Zoo Kid, DJ JD Sports, Edgar The Beatmaker) all meddle in the maudlin. However, “Rock Bottom”, a single released under Marshall’s King Krule a year after The Streets disbanded, established a linear bloodline between the rapper and the teen, and with quiet ceremony and on the release of a long-awaited debut album, the streets invariably crowned themselves a new king.

Worried, with good reason, that he’d peak early, Marshall decided to wait until his 19th birthday to put out his full-length record, despite a feverish demand since his first release at 14. Compiled from requisite parts into one dark-tinged album that is simultaneously rough and soft around its edges, 6 Feet Beneath The Moon feels more like a snapshot of mid-life world-weariness than of the impressionable, malleable perspectives of a nineteen-year-old South East Londoner. Though inspired by the likes of Roy Orbison and Billy Bragg, the record owes its primary providence to Morrissey, another heavy-hearted musician whose veins are packed with blue blood but whose skin is austere and pale. The lyrics are occasionally prickly and its tracklist is gawky, nearly spilling over with histrionic pastiches that don’t quite enhance each other or string together cumulatively. But it all works in a way that is impossibly self-aware and earnest; at moments, it can feel like the album’s misplaced thread is deliberate or thoughtful, another mark to Marshall’s precocity. The record’s primary focus is on the timbre of his vocals as he bellows about the discontent he finds in living, making everything on the album feel remarkably personal, almost too painful to listen to on a few occasions. On tracks like “Baby Blue”, “Neptune Estate”, and “Has This Hit?”, the listener is so close to the melodramatic introspection of the still-teenager that it feels invasive, raw. But even these qualities, crucial as they may be, are only what make the record simply great. It is something else entirely that turns 6 Feet Beneath The Moon into a sleepy pièce de résistance.

The prevalent—and by design, most important—effect of Marshall’s debut record is that it is buoyed by a dominant Englishness. The cultural personality of working-class disillusionment and dissatisfaction unpacks itself on this album in the forms of teenage rage, melancholy, and uncertainty. Marshall is caustic and scrappy, mixing metaphors and words with such errant pacing that his music is practically slam poetry to the foreground of free jazz. His diction is fast-paced and marble-mouthed, a natural quality of the unrefined accent of London’s peripheral neighborhoods, and his guitar descends into minor sevenths and twelfth-fret harmonics with ease. King Krule is novel to Americans because he melds elements of dub and jazz with occasionally unpalatable lyrical pandering in an accent that reeks of toughness. Adding that on to references to Bobbies, Tesco, the dole, fivers, and skivers (the rare Scotch reference on the record), 6 Feet Beneath The Moon is like The Clash reuniting against the monarchy, all while forgetting the distortion. Like Skinner before him, Marshall chose his moniker purposefully—one might propose using a royal title is his attempt at taking the piss—but he plays with it to an intelligent end. The color blue shows up more than a handful of times, and it is significant for Marshall that blue can both prefix “collar” and suffix “royal.” His music—jazzy and difficult and without hooks—is remarkably highbrow, while his accent and his word choice give him away for something ruddier. And that exact contrast is often at the crux of England’s cultural and social divisions.

Much like the Americans who laughed at Mike Skinner’s pronunciation of “marathon,” listening to 6 Feet Beneath The Moon without context could inspire more of an awe-listen than a fruitful bond. It is impressive, after all, that such beautiful jazz guitar could come from such a young talent, and the joke appears to be that Marshall is a waifish mite with a Frank Sinatra baritone. But the dismissal is undeserved and the youth-gaze is tiresome. This record is undoubtedly complicated and a mixed bag—“Will I Come” and “Foreign 2” feel better suited for a bland art opening than a wizened debut—but it's through varying amalgamous sources that it’s possible to garner context, or at your own risk, attempt recontextualization. There are notes in Marshall’s singing that embody Springsteen’s girth and growl, and in his ability to bleed without restraint, he is more American than British. No one who has heard the crashing “A Foreign State” could categorize King Krule by archetypal British politeness. His delivery is so loud and abrasive that with every syllable he sounds as if he is spitting out raw rice. Claiming Fela Kuti, 30s American jazz standards, and The Damned as influences, King Krule’s debut was bound to be complex. There is no doubt that this will not be his greatest record, which is astounding in its own right, but as Marshall would surely attest himself, he’s really only just begun.