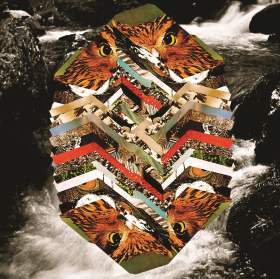 On last year’s Coral II: The Remixes, a digital bonus to Monster Rally’s debut, we first heard RUMTUM, aka John Hastings, blanket fellow Columbus, OH producer Ted Feighan’s “Splash Talk” with a variegated vail of gossamer trance. For their first collaborative effort, MR & RT EP, Feighan and Hastings flex their personal strengths into a funky effervescent timbre neither of the two are capable of manufacturing on their own.

Since 2010, Monster Rally has garnered a decent amount of attention for sampling thrift-store bargain records–leaning heavy on the exotica variety–into ephemeral spells of crackle and hook. Hastings’ 2010 digital offering Lunar Lanterns spanned the down-tempo and up-beat sides of the lounge giving us a dubby glimpse into the sounds permeating his John Malkovich room. Feighan’s not known for peaking the two-minute mark, but with a co-pilot like Hastings augmenting his samples into an expanse of lush dub-trance it seems only fitting that listeners are treated to more than just a taste.

While MR & RT EP was recently released on both digital and cassette formats–the latter coming with the additional tracks “Andes” and “Forest”–and for the past couple of months the calculated release of cuts “Raindrops” and “Tribes” have given Tumblr and WordPress bloggers enough to circulate more hype than either of the two have received for their previous solo efforts. The only unfortunate aspect to the trickle leak of these two particular tracks is that they’re arguably the best representation of the duo’s sound. Not only that, but the tracks are placed successively and early on in the 7-song album.

The opener, “Jungle,” introduces the fluid and hypnotic repetition of half-beat samples that act as the vertebrae of each track comprising MR & RT EP. By track two, listeners are rushed into the climactic up-tempo funk of “Raindrops.” The entrancing stretch of the sampled lyrics coupled with thick bass and a jazzy outro cannot help but to grab your head and shoulders and force it into a cyclical bob leaving your hippocampus desperate to process more MR&RT into the long term memory bank. The head-fuck tranquility of “Tribes” slows down the pace, lulling the imagination onto the floor of a white-sand ocean bed fit with the wash of crystal-clear waves crashing overhead. The mind can do little but watch the air bubbles float up from the mouth and into the curl of the waves overhead.

While these two tracks compliment each other in their succession, it leaves little room for the remaining tracks to make as much of an impression as they could with a reworked track list. The following three tracks “Sultan,” “Birds,” and “Tundra” play heavy on Feighan’s interest in the production stylings of Pete Rock and J. Dilla. The layering and transitions are slick and complex, but lack the repeat power of the preceding tracks which adds a minor lull to the progression of MR & RT EP. We all can’t be winners.

The finale “Free Store” shows true promise in its warm, palpitating ambience, but gets knocked up by a heavy-handed layer of acoustic guitar and tambourine. While arpeggiated samples of acoustic have worked in the past for RUMTUM, the addition seems superfluous for this number which, at its core, would be just fine as a closer.

Feighan's and Hastings's work on MR & RT EP is a prime example of why it’s so important to explore new territories and angles as a young artist. So, it will be exciting to see what the two conjure up individually following an insightful experience such as this.