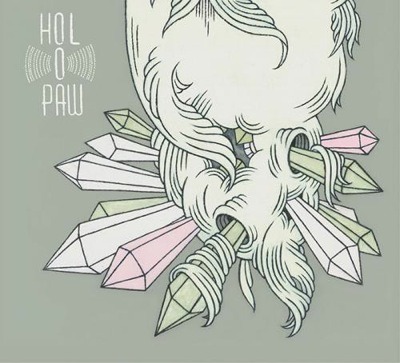 If you’ve heard Holopaw, at all, you know that they have shown off some solid musical promise right from their earliest recordings, with moments of near-brilliance. But nothing prepares the listener for the out and out, full blown, cosmic greatness of this exceptional record.

Songwriters John Orth and Jeff Hays, who have represented the crux of the band from the beginning, have matured beyond even what was previously imaginable, and they’ve given us a complex rock album that is fully-formed and completely articulated. Every song rings like honest, careful music, from the earth(l)y entrance of the opener, “The Art Teacher and the Little Stallion,” to the deep presence of the last song, “The Hobbyist and the Conductor.”

There’s an entire music store full of equipment contained within: pedal steel, organ, trumpet, trombone, clarinet, cello, violin, accordion, clavinet. And there’s an odd, ambivalent, rustic-urban, woodsy-psychedelic, morphing of fractured and re-attached melodies going on in there, breaking off from drifting acoustic chords and wandering in all directions at once.

But it’s as if it’s effortless. (Even when most great art is anything but…) Sounds and notes that say one thing and mean another. Dare I say, this record elevates Holopaw to the point where they are standing in the hallway knocking on the door of the penthouse occupied by Pavement, Ryan Adams and The National. It stands as a towering achievement for Orth and Hays, one that should garner them plenty of sycophantic reviews, but that probably won’t do a whole hell of a lot for record sales.

They’ve done some label hopping in their time, and they’ve, no doubt, been hampered by their bad choice of a name, but Oh Glory, Oh Wilderness is complete vindication for anything either of them may have done in the past.