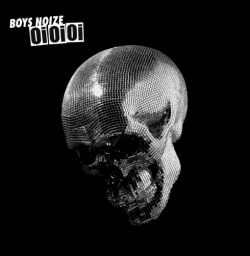 Reclaiming what is rightfully theirs, the Europeans have dominated dance music this year. I have romanticized visions of euro-tech clubs in musty, decadent basements where this music makes the walls thump with pulse and heavy breathing. It is Ed Banger in France, Simian Mobile Disco in Britain and it's Boys Noize in Germany. Boys Noize is Germany’s crack back into the electro scene with Oi Oi Oi, an album that relies heavily on fuzz bass drones, but finds moments of synth-pop delicacy.

“&Down” should be treated with caution as it opens the album with little subtlety and no opportunity to adjust. If you have the volume at ten when you hit play, get some space between you and the speakers. It falls nicely in with the aural assault that has become synonymous with dance music. It is glitchy, woofer bending, and vicious as shit.

But does it build upon current trends, meshing well with its contemporaries, or take the foundation and engrave its own epigraph? Boys Noize seem to look to the American art form that originally borrowed from zie Germans, as “The Battery” imitates Miami bass, ghettotech and at times straight hip hop breaks and samples. It is as though the Boys are saying “two can play this game” and “we’re looking at you, Bambataa.”

Boys Noize beg criticism for playing by the book with a record dominated by electro-dance that is all the rave. But for all its conformity, it has its moments of being a solid companion piece. On “Shine Shine” the Boys dabble in light soulful funk territory, as though it were a continuation of Daft Punk’s “Voyager”. It makes an over-thinking writer wonder whether reference points are bastards or beacons.

Ultimately, it is not that Boys Noize have created a lesser work; Oi Oi Oi unfortunately hovers somewhere in the upper-middle. Were it part of the initial dance discovery for indie kids, it would have been a smooth entry, but the bar has been set higher than simply fluctuating somewhere between doing your Homework and pure Discovery. Boys Noize clearly has something worth hearing, if only to tide the ear over until another major group returns to the studio. Still, one can only hope the Boys will next time seek a new flavor that challenges its predecessors.