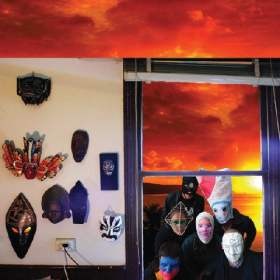 With a member of modern Australian mainstay Total Control in tow and an oft-cited connection to ramshackle punk group Eddy Current Suppression Ring, it's convenient to view UV Race as the piss-take side-project of players involved in more lofty endeavors, but that would unfairly undermine UV Race's conceptual substance and cheeky subversion.

UV Race delivers political commentary through the vocabulary and sensibilities of an overmedicated elementary school student. UV Race sends pop hooks through an opiate breeze and they fly in the face of fans expecting Total Control's austerity or ECSR's recklessness. On its sophomore effort, Racism, UV Race channels criticism, humor and a deep record collection through a unique conceptual aesthetic that draws from maverick proto-punks brutish musical approach and the cheeky social commentary of punks feigning idiocy.

Most tracks showcase devolved, simplistic proto-punk. Gang vocals shouting “Oink, oink” or “I've got raw balls” reinforce the surface level goofiness, but it’s not accurate to patronize UV Race with complementary descriptions of only its Troggs-like thump and a few amusingly absurd choruses. Few vocal melodies or song-structures rarely stray from an A-B format and the keyboard often vamps repetitively on a single-note in a drooling Stooges pastiche. Yet, through UV Race's oafish primitivism perseveres an intelligent, incisive commentary. UV Race certainly has an acute sense of humor, but Racism contains hardly a vapid track.

Tucked amongst Racism's minute and a half dirges are a few surprisingly tender ballads. “Life Park,” with its narrative of a working stiff rejecting his capitalist dependence, is actually a clever critique of a society in which work is the crux of one's existence. It's not an original theme, but to explore it in what seems like a comically pleasant pop tune amidst so many other brute and garish numbers is bold. The spoken introduction to “Sophie Says,” in which the vocalist expresses his uncertain emotions towards the song's female subject with glib sincerity, and the subsequent call-and-response vocals between a man and woman is poignant, despite the gnawing sense of cheekiness. Through pat indie-pop instrumentation, melancholy keys and incongruously bumbling vocal delivery, the story is heightened to a saccharine peak of sentimentality, effectively subverting the traditional formula for a love song while never betraying whether UV Race intends the song as a complete gag.

“Bad Egg” chronicles a pair of juvenile delinquents from their meeting at a community youth center through drug-centric early adulthood in frank terms above the album's least assertive instrumentation. With two minutes remaining and the story seemingly unconcluded, the vocals cease and white noise slowly encroaches upon the track as two notes drone wearily. The implication seems that the characters’ lives continue to degenerate, despite an initial meeting at a state-run community center and the decision on behalf of UV Race to leave the conclusion to listeners’ inferring faculties is surprisingly literary.

Racism’s trifecta of Killed By Death-style punk songs (“I’m a Pig,” “Raw Balls” and “Nuclear Family”) are more likely to characterize listeners’ first impression of the album, but the crass subject matter and impeccably sneering delivery is a surface-level joy of Racism. They are the sensational reference points for casual appreciation — absurdist sign-posts guiding listeners through UV Race’s otherwise articulate psyche as represented by Racism, an album whose artistic merit increases inversely with the ostensible complexity of each song.