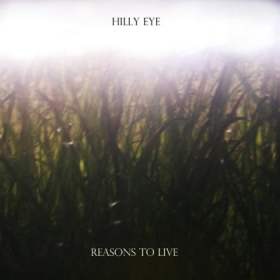 The drama hits full force early on as the record takes hold in the midst of thumping drums and the high-pitched calls of angels or warriors. But it really takes hold in “Amnesia” as Klein sings of glory over the din of her grunge. It’s a song epic in the most traditional sense, with lyrics of god, country, and steadfast loyalty. More overt here, the sound, if not the theme, continues throughout the record, each moment played out in its most dramatic form.

Building a huge sound that tries to swallow everything, Hilly Eye sometimes fall into the kitchen sink they’ve constructed, losing the thread amidst a pile of looped guitars and muddied vocals. Songs like album opener “Almanac” and “American Rail” suffer from burying Klein’s voice too far back in the mix. Reasons To Live is best when Klein’s voice is pure and pulled apart, all edges and a bit confrontational, even when she’s playing it soft.

Not that she always plays it soft. Klein’s pretty falsetto is often on display here, but her rougher side breaks through for some truly awesome moments. “Animal” has a few absolutely unhinged, almost orgasmic-insane, lines tucked into a song that has a bit of a Garbage feel to it in its gender stereotypes and switches.

“Jersey City,” one of the most soothing, most abrasive, most interesting, and most fucking rockin’ numbers on Reasons To Live, lulls you into a daydream as Klein coos like a church choir, moving you blithely into another world, elevating, growing, bursting forth into the night with a heavenly awakening…that suddenly breaks when Klein screams, “YOU THINK YOU’RE SO CA-ALM!” Transformed into a banshee with a bloodlust and a bone to pick with Guns-N-Roses lovers, Klein just as easily slips back into her wings by the end of the song, less a personality shift than the reality of simultaneously being so many things at once.

And it’s that combination of vulnerability, sweetness, and ferocity that really takes hold as Klein bounces from the beautiful interpersonal symmetry of “January,” a ballad that celebrates shared experiences as simple as “I’m alive, you’re alive,” to the eye-fluttering chaos of “Double Dutch” and the dark, gothic undertones of “Louisville” and “Jacob’s Ladder.” With very little, Klein and Tung still attempt to do it all, throwing their arms wide and looking straight to the stars, fearless. That confident, attacking energy fills every track and bolsters the album, creating something mythic out of mid-air.