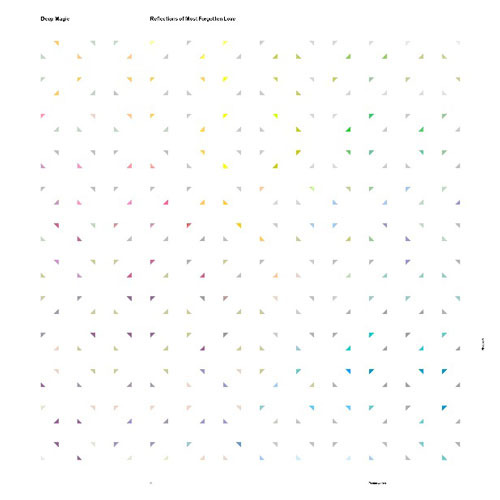 2013 has been the year of the Boards of Canada mystery record reveal, the brazen Daft Punk quarter-annum marketing scheme, the Oneohtrix Point Never soft-spoken spring awakening, and #Yeezus. The year that was is barely half over, and it has taken with it our ability to respond to good music with dignified aplomb. When Alex Gray of Deep Magic released the first single off of his third LP, Reflections of Most Forgotten Love, a song divisively titled “Brighter Days”, through its entirety I felt like I was looking down the wrong direction of a set of railroad tracks. As the news of bigger, bolder records emerged in swirls of fabricated expectation, I was blissfully obstinate—plugged into another thing entirely, not knowing what fury hell hath wrote, or when the barreling train would hit the station. Deep Magic’s latest begins with a track titled “Only You”, and when you’re desperately searching for a tonic to manufactured desire, fading away on a cloud of sonic ambience is probably a good place to start.

Reflections is the third record from Gray’s solo project, an undertaking he produces when he’s not working as a live member of Sun Araw, and if you’ve ever been to a 90-minute hot yoga class the morning after abusing the cheapness of cheap beer, you’ve already heard this record without realizing it. It starts with a deep, sonorous bellow, layered with the trickling water of a nearby creek, and as a natured acoustic guitar ambles around a microphone, the entry into its 10-track offering is smooth and filled with possibility. “Only You” begins as a shedding of skin, a literal offering meant to give sacrifice to the sun gods and let go of all that ails you. By creating a generous foundation in the opening of this record, Deep Magic enables giving in to all 42 minutes of its life cycle with demonstrative ease. Reflections of Most Forgotten Love should not be, by any means possible, indulged on shuffle or in single servings.

The rest of the record plays out on a terrestrial but familiar terrain, like yet another example of the Baader-Meinhof phenomenon. The sparkling creek water returns, as well as the deliberate and purified fade-ins and fade-outs, and any instance of aggression feels muted and forgiven. It would be derogatory to suggest that this is background music to be played while doing something else (as is the case with all instrumental or ambient albums), but an exception will be made if you’ve just taken up meditation. I’ve actually found my breathing getting deeper and gentler while listening through mournful lamentations like “Alone In Her Cave” and piano-melodic “I’ve Been Thinking.” They are not dissimilar to breath, in fact, in the way that Holly Herndon’s fantastic Movement forced the listener to think consciously about and adapt their respiration. When the album’s main single begins, at the near end, something like deliverance is reached, all through the bashfully poetic growth of arpeggiated tones so chosen to reject rhythm and encourage freedom. They are critically underpinned by scratchier mettle, but as symphonic chords enter toward the song’s height, once again, any signs of trouble are placated. “Brighter Days” may be Reflections of Most Forgotten Love’s longest and most undulating track, but it isn’t its best. “Best” would imply singularity, and this is the second reminder that this album should be taken in one piece.

Deep Magic’s previous full-lengths—2011’s Lucid Thought and 2012’s Closed Eyes—don’t capture this brutal totality in the same way. The tracks are more experimental, less cohesive, less structured—all to the effect of a loosely knit throw blanket, while his 2013 effort is more like a crisply starched quilt. This record is for fans of ambient music and philosophical chatter, but it’s also for admirers of contemporary art and attendees of night markets. The person who might not enjoy Deep Magic is one who doesn’t find purpose in patience. The exchange between artist and listener can be a munificent one if we let it, and in the example of Deep Magic’s best release to date, the delivery only hits harder if the listener remains open and willing to the sum of its ethereally woven parts.

Reflections of Most Forgotten Love is available now on Preservation Records.