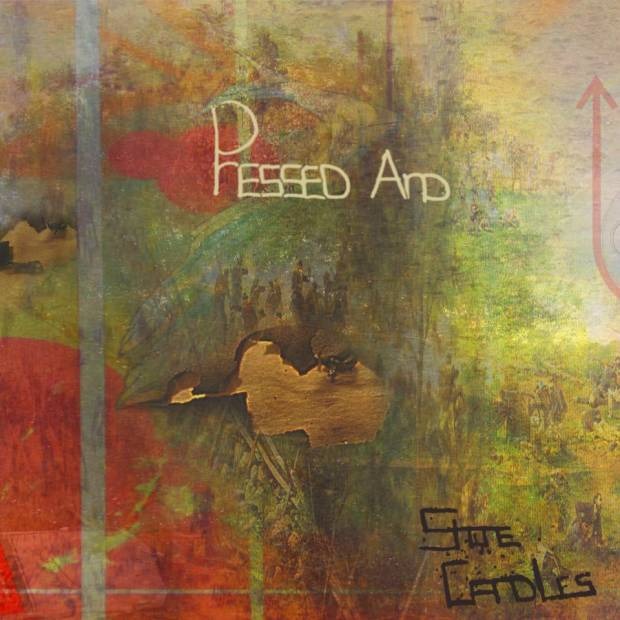 For the past few years, North Carolinians Pressed And's Andrew Halmlet and Mat Jones have aligned their sound toward the brave new electronic frontiers. And then here in 2013, things got organic and vaguely spiritual, as the past electronica experiments of Post-Ad for Sync, Imbue Up, and Hyper Thistle get meditative and in touch with more of their natural side on their Stone Candles. Finding a home on Mush Records where the creative organic re-imagining of every musical trope is encouraged in every capacity and regard (consider the eclectic output from Pregnant's Daniel Trudeau), the freedom of acoustic, analogue, or digital choice frays the focus of Pressed And's better electronic sensibilities when those disparate components fall out of their intended harmony.

“Haus” puts the Berlin spin on a candy flipped house twist, as the altered voice effect moves throughout the psychotropic, holiday in the head soundscape environments. Perhaps more specifically is the duo reclaiming of the house genres origins with roots in Chicago, Deutcheland, Netherlands, New York, and such. “Boo” keeps the rhythm track blazing, while Mat's vocals keep all the effects pop keys ghostly. While “Get” is important in its relationship to the follow-up cut,”Decision Made”; the duo's relationship between acoustic and electronic harmonies feels oddly disjointed. It's namely the in-congruence between the juke drum machine's rapport to the unplugged guitar and howling vocals. As it blends into the reciting vocal abstractions of “Decision Made”, this relationship between guitar are synced up in unison as the rhythm, samples, electric guitar plasts and loops work in the impossible unity that define's Pressed And's raison d'être.

After the dense storm of “Decision Made”, “Green Tea” feels like a digression into a yoga spa. Because “Decision” has the weight worth of a dissertation about why it is emblematic of the Pressed And sound; it might feel natural to hear “Tea” as an intermediary before the duo drops the much beloved single “Creed Unlove”. Here those familiar vocal chops get edited around, as keyboards reveal themselves like the summer’s passing wind with the occasional cat meow. “Chalk On My Hands” continues the free flight narrative style where whirring electro dance gets met with a sparse, drunken guitar ballad. But that does not mean the track is out of control, somewhere between the everything-and-the-kitchen-sink approach to electrical-anything that keeps the chaos at their beck and call. “372” feels like the guitar is ripped from an outtake from the sessions for the previous cut “Get”, while you wait for the duo to get back to their full on experimental mode.

And as soon as that question crosses your mind, they drop “Ain’t Never Dithered” to keep you guessing what’s coming next. With vocals rising in chanted scales, eastern guitars ring out beneath a looping backward streaming sets of white noise. As the title suggest, there is no dithering from Pressed And's own self-charted course of audio creations, as you are treated to squeeze box samples battled up against eerie voices with literal burping beats on the unpredictable shape-shifting “I Belong”. If you listen away for a second, the entire song transforms to high pitch loops singing the title refrain with even more vocal eeriness. Their full creative powers are exhibited on “Bored On a Lam”, everything from sample, synth to string is so carefully placed like a sound collage that includes the catchy hook of, “nobody every learned about you, nobody ever got that far”. “Nulek” delves into the group’s nature by altering forest dwelling sounds with Morse code and meandering vocals. “Plum” is the lounge flipside of “Nulek” that moves like shuffling steps on downers that virtually melts down artificially flavored fruit gummies left out on the patio concrete beneath the 2pm sun. Exhibiting restraint on the more electronic components and less on the more vocal and traditional guitar instrumentation, “You and Me and Ruby” goes for the meditative triad vibe but the focus feels lost in Mat Jones’ vocals.

The apparent shift from the drum and bass redux on 2012’s Hyper Thistle EP is the organic quest for peace and tranquility. And when Andrew and Mat find the balance of their zen, you get cuts like “Decision Made”, “Ain’t Never Dithered”, “Bored On a Lam”, “Creed Unlove”, and so forth. It is the duo’s strength of drum and bass variations where they can harness the organic samples and analog guitar electrical amplification. Yet what Stone Candles suffers from on numbers like “You and Me” and “Get” is a disorganized off timing of vocals that throws off their congruence in relation with all other sounds in the mix. Pressed And work best when they are writing the rules and making every instrument work on the accord of all the elements involved [revisit Hyper Thistle's “Komusō Flutter Kick IV” for an example of this]. The issue stems from a need for greater reconsideration and restraint to utilize the vocals to better enhance the rhythmic impressionistic audio. From the hyper new worlds of dance, taken to the mother earth natural realms of pagan candles and solstice rituals; Andrew and Mat still manage to pull off one of the best day tripping albums you would want to hear at every festival field this summer.