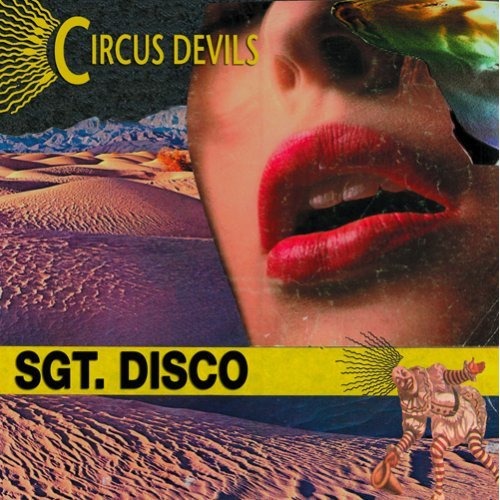 Circus Devils is one of the several (hundred thousand or so) side, solo, or throwaway-projects of former Guided by Voices frontman Robert Pollard, who has put out roughly five albums a year since 1996. This particular one is a Mike Patton-ish long-distance collaboration project with Todd and Tim Tobias, who provide music and production. As such, you can’t really call it an album. It’s more of an… assemblage? Installation? Concept? What I mean is you can’t treat Sgt. Disco like music, or anything you would actually listen to for fun. Because 32 tracks of Pollard crooning randomly over random music certainly doesn’t sound like fun, though it’s quite a bit more enjoyable than it sounds.

Pollard’s turns of phrase can be pretty clever like “In Madonna’s Gazebo,” which both is and isn’t “In-a-gadda-da-vida”. Also, the tracks range in length from thirty seconds to four minutes, making listening sort of like going through an hour of multiple personality disorder. Musically it’s somewhere between the Who and British art-rock drummer Robert Wyatt (Pollard even seems to enjoy affecting the King’s English at times) — sometimes heavy, sometimes airy, oftentimes prog-y. In “George Took a Shovel”, he uses a raspy voice to tell the story of the eponymous hero finding a cream-filled something and hitting it with the eponymous shovel. “Love-Hate Relationship with the Human Race” is a 70s hard rock explanation for its title. “Man of Spare Parts” is one and a half minutes of Eddie Vedder mock-up. Styles abound, shifts are rampant, and only occasionally does it need to make sense.

The first and last tracks are probably the most memorable, the dreamy “Zig Zag” and organ-heavy “Summer is Set,” both potential bookends to an unwritten rock opera. “Taking me down to the labyrinths / of a twisted child’s erector set / I’ve become the perfect pet / in the autumn of my life,” sings the 50-year old rocker in the triumphant swan song “Summer is Set” to end the album. If only all the tracks had this sort of personal presence.

But if I had to choose between Circus Devils and any number of Mike Patton's collaborations (Sgt. Disco is released on Patton’s Ipecac label), I'd probably go with Patton. Though at times unlistenable, Patton has been consistently more daring and interesting with his side projects, making true concept pieces. Sgt. Disco is far easier to toss onto iTunes than, say, Adult Themes for Voice, but ultimately, less compelling.

If Sgt. Disco were a third of the tracks with twice the effort, it would be a solid work of art-rock, mashing the styles of the last three decades into a straight-faced retrogression. As it stands it’s a bit too much to be more than fodder to flame Pollard’s ever-growing discography.