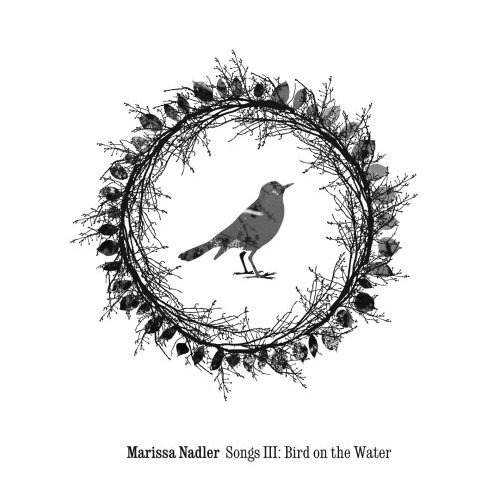 Many bemoan the onslaught of new technology that has nearly rendered the album obsolete. I, on the other hand, would argue that downloads, mp3s and the like merely raise the bar for musicians; it’s no longer acceptable or commercially viable to release an album with one solid single buffered by ten shitty songs. Nowadays, it seems fans need to be of the die-hard sort to shell out the bucks for an actual album. Well, I’m here to tell you that Marissa Nadler’s latest album, Songs III: Birds on the Water is worth your hard earned cash and perhaps even your soul. That’s right, you heard it from me. This songstress from Massachusetts creates a weird and wonderful world with her eerie, beautiful voice, intricate guitar work and outstanding lyrics.

Nadler claims her lyrical influences are Leonard Cohen, Nina Simone and Joni Mitchell; these giants of songwriting are definitely present on this album; she seems to have channeled their pitch-perfect phrasing and succinct emotional genius. Although she lacks their contemporary feel (you won’t hear her singing like Mitchell or Cohen about the political or cultural climate of her time), Nadler creates a sonic universe all her own. There is enough of the touch of old Irish or Appalachian hymn and “dream folk” quality to her work to set her apart from these two sixties icons. Indeed, her songwriting, as far as actual content goes, reminds me more of the Decemberist’s Colin Meloy in that it suggests an older, more baroque world where what happens is ultimately up to the songwriter. The logic, no matter how strange, is believable because the storyteller tells us it’s so. The drama unfolds, not in the Chelsea hotel, or California in the Summer of Love but in a universe of Nadler’s making. So when Nadler sings “Sylvia, I met you in the belly of a whale” we believe her, even if we don’t quite understand what she means. (And it gets better, because unlike Meloy, Nadler lacks the affectation and the faux-British accent.)

Death seems to be the theme of the album- every single song mentions or alludes to it. Yet the lyrics, although dark, retain a dreamy, folksy quality perfectly complimented by Nadler’s sweet voice and pacing, nervous guitar-work. Unlike Cohen however, Nadler brings in more instruments, more reverb and more production per capita. Her producer Greg Weeks has a hand in all of this and provides one of the genius moments of the album: playing droning acidy guitar on the third track just when you think you are listening to a folk record. It’s this creativity and willingness to take risks that make this album a stand out.

Weirdly, the low point of the album is an homage to Cohen himself: near the end of the album Nadler does a cover of “Famous Blue Raincoat” and the attempt that, though noble, doesn’t quite work. Nadler’s voice lacks the ironic understatement of her idol and her harmonies bury the melody in sugar; it's saccharine when it’s meant to be subtle. This of course, is a complaint coming from a fellow Cohen fan who loves the original dearly.

It’s exciting to hear from such a promising songwriter. I only wish that all artists were so assured of their own style as Marissa Nadler. I’ve said my piece- go buy her album.