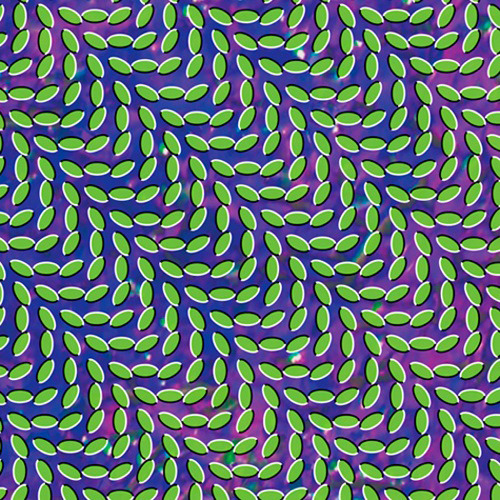 A few years ago Animal Collective were the quintessential freak folk outfit: proud exponents of the communal campfire jam aesthetic. On Merriweather Post Pavilion, however, the hippy pastoralia has all but evaporated from their sound – in its place, a jubilant, day-glo psych pop as influenced by dance music as by the Incredible String Band.

There’s the odd moment recalling the Animal Collective of yesteryear, the mantra-like vocals and Jew’s harp accompaniment on “Lion In A Coma”, or the Beach Boys-esque vocal harmonies on “Bluish”. But MPP’s breathless verve comes from channelling and remoulding the forms and energy of the global dancefloor. “My Girls”, for instance, takes the synth riff from Frankie Knuckles’s “Your Love” and staples it to an angular dubstep rhythm track, complete with driving syncopated kick drum and lightly crushed halfstep claps. Similarly, “Also Frightened”, “Daily Routine” and “Taste” rock wobbly saw-tooth basslines that could have been lifted from tracks by Rustie or Boxcutter, though the dubstep model is twisted into startling new shapes by the songs’ baffling time signatures. “Summertime Clothes” meanwhile looks to a different kind of rave for inspiration, its pounding four-on-the-floor beat and jigging rave synth drawing on the ebullient hyperactivity of euphoric trance.

But while MPP’s beats and basslines are sourced from the dancefloor, the group’s vocals, in contrast, sound almost liturgical. This is partly due to the choral effect of the vocal harmonies, and the thick cloister-like reverb that coats the group’s voices. But more importantly, it’s due to the wide-eyed spiritual conviction with which Avey Tare and his companions deliver their songs. Their vocal delivery has the enlightened innocence of pure faith, and it’s this more than anything that sets Animal Collective apart from the current crop of synth pop ironists and nu-ravers.

Merriweather Post Pavilion is a big budget, studio-tooled blockbuster of a record and anyone looking for the warm, fuzzy spaces of Sung Tongs or Feels will be disappointed. Yet, for all that, its parti-coloured, genre-munching innovations and its intoxicating synthesis of the sacred and the profane, make it a landmark of pop ingenuity.