Beyond Hamsterdam: Baltimore Tracks from THE WIRE – Various Artists 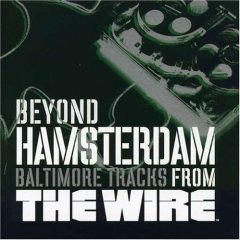 If the legion of TV critics who regularly get all starry-eyed over HBO’s THE WIRE (“One of the best TV dramas… ever”, etc.) can be believed, listening to THE WIRE, i.e. the new companion CD Beyond Hamsterdam: Baltimore Tracks from THE WIRE, probably doesn’t hold a candle to the experience of watching it. But, that’s not to say this compilation can’t slang a little dope of its own.

Most importantly, it seems that the compilers have a sense of Baltimore as the lower Mid-Atlantic hip-hop hothouse that it is — open to the convergent gravities of the Dirty South and the New York massive respectively, but sheltered enough to spawn its own weird and wonderful sub-genres like the sensational Baltimore Club. In fact, it’s one of the disc’s two examples of this style that stands out as the album’s best track. Rod Lee’s “Dance My Pain Away” is a low-tech, hard times, dance floor chant that harkens back to the days when MCs implored the people to dance as a means to, at least momentarily, forget their problems. It’s a simple idea perhaps, but refreshingly simple in an era when a preponderance of rappers are more or less telling us, “Hey, dance because I’m rich.”

Fortunately, the rest of the artists on Beyond Hamsterdam don’t really fall into that trap either. While these hard-boiled MCs aren’t exactly reinventing the wheel lyrically, you will dance because the tracks are crazy: Mullyman’s walloping marching-band-gone-hyphy “The Life, the Hood, the Streetz”, the funky burglar alarm of Dirty Hartz’ “That’s Da Sound” and the menacing snap of the Get ‘em Mamis “When You See Us”.

At the very least, all the talent on display here makes it pretty clear why HBO could be convinced to set a major TV drama in an urban backwater like Baltimore: the funk, the grit, the grease, the grind, and most of all, the energy. There’s definitely something going on down there.