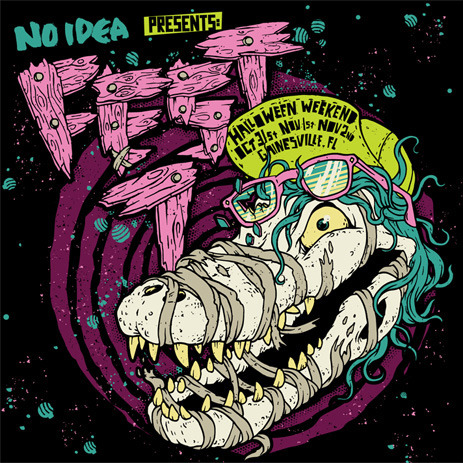 Since its inception thirty or so years ago in the bank and oil crisis demilitarized zone of the Lower East Side, the Punk that was an impromptu nation of a million “no’s” adding up to a big “yes” has splintered. It has moved away from the absolutism of capital “A” anarchy formed in the aftermath of the hippie movement project to groom future Republicans’ definitive completion. It has moved away from that same era’s dumbstruck record label patronage of sneering artists. It has moved out into the suburbs. It has moved back into the city on someone else’s dime. Something shiny approximating the proto-hipster noise it once was made its way back onto the radio… many times. Even when we wished it would stop.

With its repetitive song structures, its recurring themes, its frequent preciousness, its hopeless devotion to revolutionary imagery without a politics leading punks to hit anyone but each other, like some fascinatingly ill-formed new specimen at the Kunstkamera sitting in a jar next to Rasputin’s penis, or as though it were an unstoppable locomotive of vegetative meat screaming along rails waxed by the effluvia from its own bedsores, the many musical forms that each generation since the start has called punk have steamed right along, a bag of cats, the gravity of whose mass curves space and time, that just won’t drown.

And now we get to why I like punk. Somewhere in all that pop calamity a mutual benefit society for itinerant beer guzzlers unironically doing ironic things (or is it the other way around?) and goading each other into new feats of entertainment has emerged. It is this interdependent subculture that, piggybacking on the commonplaces of wider society like currency, capital, and entrepreneurial spirit, has turned “fuck you,” whatever convoluted thinking got it there, into something that can support its membership’s shared devotion to skill, sincerity, and limited non-materialism through rock.

Gainesville, Florida’s The Fest, put on by No Idea Records, has been a tangible marker of this for seven years. In his introduction to the the official Fest 7 guidebook, founder and No Idea Records publicist Tony Weinbender writes, “…I quit my job, started working several part time shit jobs, bought a computer off a good buddy who was in a bad spot, and just started doing what I loved. No money, no help, just faith and drive.”

The result is that the Fest is a punk festival in an out-of-the-way university town, tucked out of sight like so many other diploma mills/adolescent Camp X-Rays, that has been waged like a crusade of sincerity and alterity for seven straight years.

The Fest 7 arrived over Halloween weekend slicker, better organized, bigger, and better attended than the years before. That description applies, too, to the promotional compilation CD thrown at the attendees as they sweated (and have no doubts- the attendees were, or very definitely had been, sweating) in line at the Holiday Inn to register for the three day event.

No Idea has made the Fest 7 compilation available here. At a total of 34 tracks, the Fest 7 sampler does not represent the full range of 250+ bands who played over the weekend. All the same, it runs from hardcore to pop punk with side forays into singer-songwriter territory, still able to paint a picture not so much of a musical genre that can’t be absolutely pigeonholed—yes, a lot of it can—as it, instead, draws your attention to an international scene full of people who, for the most part, don’t want to be assholes. In this day and age, that is pretty special.

Standouts on the record include Bloomington, Indiana’s Good Luck and their track “Come Home,” a high pop interpretation of what the corner of Wolfie St. and Modest Mouse Blvd. might sound like. Gared O’Donell, former singer of Planes Mistaken for Stars, makes a bearded appearance in his new singer/songwriter oriented getup Hawks & Doves. The short snort of “No Gods, No Masters” by Gainesville’s Jammy Dodgers, NJ’s The Measure [Sa]’s chick-fueled lackadaisa-pop, Paul Baribeau’s (God help him) Promise Ring influenced Rita(Dy)lan confessional, LA’s Ready the Jet’s fuzzed “Liquid Indian” summer day power-chord distortion, Stressface’s cellophane scream, Towers of Hanoi’s operatic emo-riffic lady croon, all these varied styles are here. Not only is it fun and loud, not only is a lot of it smart, but the unsubtle passion that none of the Fest bands hold back inspires optimism, hope for people in general.

I don’t know the selection process used when putting this compilation together, but satisfying as it is to open your head to a mob of high-tempo unknowns, it only scratches the surface of what is going on in festivals like this that haven’t been entirely co-opted by the competition of schmoozing ad salespeople. It is evidence that there is life in a genre long after many, many periods of industry exploitation.

I’ll drink a refreshing PBR to that: Punk is dead, long live Punk.