The Hands That Take You – Radiation City 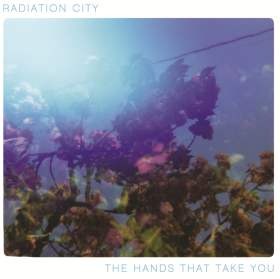 I don’t know if it hurt them, but when Radiation City fell from heaven, it certainly didn’t do me any harm. Led by the angelic Lizzy Ellison and her beau, Cameron Spies, Radiation City’s debut, The Hands That Take You, lifts up listeners into a shimmering orb of soft-touch tunes dealing with remembering, forgetting, dream-fields and fall-outs. Amidst the god-sent glory lies some of the most fun vocal play this side of the doo-wop generation.
Released earlier this year on cassette through Ellison and Spies’ label, Apes Tapes, The Hands That Take You does well with a CD/vinyl release, losing none of the hazy, nostalgic vibe of analog but building up an impressively crisp electro-feel behind the duo’s pop hooks. The album’s standout track, “The Color of Industry,” is the best pop song I’ve heard in years. It’s got it all, from ooo-ooos to oh-ohs and back again, stacking the sweetest sentiments with an upbeat melody, calling to mind the golden era of 60s pop, tinged with a modern strength. But the track differentiates itself from the monotonous mood of retro-pop songs with its deep-sea sound, vocals wavering from far below the boardwalk, bubbly and distorted.
The rest of the album is far from upbeat, mostly composed of moody melodies and half- spoken words, set adrift through an electronic landscape of the ether. “Summer is Not an Act 1” climbs a glorious vocal ladder on a stairway to heaven, punched with hard, wet electro-beats, with Ellison singing, “We got away…this ti-i-ime…” Ellison’s sugar-sweet vocals are complimented by Spies’ voice that strays from a distressed, Pavement-esque style in the beginning of “Parks” to a Prince or Jim James- like falsetto, best featured in “Mammals.”
Throughout the record, the two play with their voices, creating beats, interrupting harmonies, and bringing back the bah-bah. “Phantom Lady” ties the whole album together into a near-rock opera, re-using “We got away this time,” but adding its compliment, “We have so much time.” Snippets of conversation and detached phrases dip in and out of the number and the album as a whole, infusing a more White Album– type psychedelia than the usual “Give Him A Great Big Kiss” cute, pop conversation.
If The Hands That Take You is what happens when you stick your head in a microwave, I’m ready to advocate the brain-fry in the hopes of reaching this Radiation City.
PrevPreviousAnthems For A Stateless Nation – Noah And The Megafauna
NextCheap Perfume – Bare WiresNext