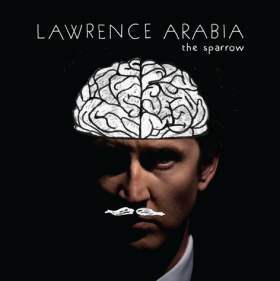 Lawrence Arabia, a.k.a. New Zealand songwriter/producer James Milne, is a lounge lizard, swooping through sultry songs with only the slightest shake of his shoulders, the quiver of a lip – movements barely noted. Minimal, exotic, yet resting on traditional instruments like strings and a piano, Arabia’s latest release, The Sparrow, is the soundtrack to a slumming Moulin Rouge, an old jazz singer’s vacant stare, the unrepentant wandering of a trashed troubadour. It’s all romance and haze with sound set in the 1920s that we all really hope existed but definitely never knew.

The jangling, atmospheric instrumental for a smoky night in at the local saloon, “Dessau Rag,” appears toward the end of the album, but its vibe sunk in straight from the beginning. Mostly light jazz mixed with some singer-songwriter stories, The Sparrow is an easy, if odd for these times, pill to swallow. Milne winds his voice around each number, pulling into falsettos to add drama to “Lick Your Wounds,” delving into a hypnotic monotone for the chanting “Early Kneecapping,” and adding a little off-kilter lilt to the bump-a-long, unhinged nursery rhyme, “The Listening Times.”

The album’s two most interesting songs, opener “Traveling Shoes” and “The 03,” twist together, telling a single story of a young man worn out by “a town of perfect isolation,” first leaving, then returning in a sordid shuffle some call the circle. Even in its distaste and melancholy, “Traveling Shoes” is the kind to make you drag yours' across the floor, a song so easy to sashay to, it’s almost second nature. Exotic yet familiar, it plays like a ballroom number you didn’t know you wanted.

“The 03,” on the other hand, sounds more modern, a timeless “tail between my legs” tale that speaks to failure even as the melody shoots smooth and carefree. It’s way too happy for its own lyrics, a spiral that pretends to be a straight line, getting downright holy with its sighing euphoria during the breakdown.

It’s that sort of smoothed-out style that keeps the wrinkles from mattering much in The Sparrow. Though the lyrics may be deep or interesting, the delivery keeps most things on the surface level – the kind of small talk you could expect to encounter in a club, romanticized. Sleepy, sweet, a little mopey, The Sparrow will slow down your blood stream faster than a gin fizz, and with just as much style.