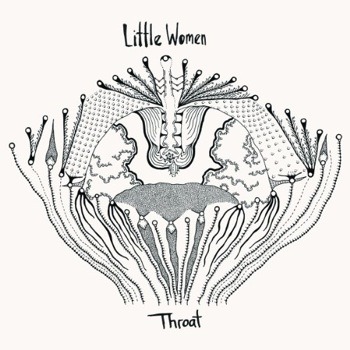 Little Women, a quartet of men, have released a jazzy, poly-genre seven part movement called Throat. The saxophones are manned by Travis Laplante and Darius Jones, guitars courtesy of Andrew Smiley and Jason Nazary on drums. As a novice in the realm of free jazz concepts and performances, I found it best to understand this aural juggernaut piece by piece; song for song:

“Throat II”
The second movement begins with the saxophones rising in hums. The effect builds like moody tension bellowing toward a flutter of bees battling each other with brass instruments.

“Throat III”
A new metal monster rises. I think I now understand what the first two tracks were warning me about. The guitar is at war with the drums while the alto and tenor sax are arranged to build a towering Ziggurat. The battle is split by the two horns, which only encourages Andrew to thrash out chords like he’s never thrashed before.

“Throat IV”
The eleven minute master work sits happily centered in the album. Like a song cycle within the cycle, it begins with hopeful horns that turns into a controlled guitar shamble fest with peaks and valleys before giving in to free form abandonment.

“Throat V”
The fifth number is a sampler of sorts. At times it sounds as if the guitar and horns are having a conversation, other times there are exercises of blares on the beat followed by a two minute guitar outro. It is interesting to hear some of the slow note soloing of Andrew’s cascading and punctuated riffs, with light sax ambience in the background.

“Throat VI”
Now we have reached the apocalypse of Little Women’s design. Horns blow out smoky tones like an old tug boat being plunged into a pit of fire, giving vision to images generally reserved for the histrionics of fear-driven religious doomsday pamphlets.

“Throat VII”
And finally we hear the quartet’s voices in “oohs,” “owws,” “eees,” grunts and other exclamations assembled in various orders of response. The song sequence then concludes with a walloping chorus of imitated bonobo mating calls.

I would like to note the amazing leads and creative structures that the saxophones provide. Timing is on the group’s side in that each member seems well in tune with one another for all the swift shifts, cues and interplay between the instruments. With respects to the mighty undertaking of the progressive cycle that is “Throat I-VII,” the vocal warm-ups on “Throat VII” sounded unnecessary. A bit of comic relief after the mighty storm, but I wanted to hear more of those building rivalries between the saxophones. Little Women’s Throat is now available through AUM Fidelity.