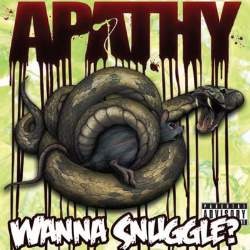 Paying his dues as an emcee since the
late 90’s, Apathy continuously shines amongst the likes of
Jedi Mind Tricks, Sage Francis, and Styles of Beyond. Needless to say, Ap has
rigorously come with it at every moment of his career. Releasing his
debut album in 2006, Eastern Philosophy, followed by a handful
of collaborations and mixtapes, sprinkled in with a record deal via
Atlantic that went south due to “creative differences”, he has stayed
tremendously busy polishing his delivery.

Wanna Snuggle,
as horrendous a title it may be, is for sure one of the biggest sleepers
of the year. With 22 tracks and virtually no interlude fluff, Ap delivers a heavyweight effort in every aspect of the genre. The
beats exude gritty precision at its finest; the drums come through very
heavy with a nice swing throughout. This may be the most surprising
thing to many after hearing that he put down most of the MPC work on
the album, aside from only a few tracks by Mike Shinoda and Teddy Roxspin.
Reminiscent of emcee/producers like J-Live, who is also featured on
the album, he places himself in a league of very few artists who
can successfully pull off such a tremendous feat.

With the boom bap department taken
care of Ap moved into the booth where he’s proved many times he has
all the elements aligned quite nicely: the voice, the delivery, the
metaphors, the art of storytelling, and a good sense of humor. No matter
what your fancy when it comes to hip hop this album has something for
you. For those looking for cutthroat delivery set your sights on tracks
like “I’m a Demigod” and “On and Off the Mic”. The ladies
even have a few tracks dedicated to them wherein Ap states one of his
main requirements: “I wanna find the perfect mate who knows about
the purple tape.”

Coming to the end of a year with its fair share of notable releases, Wanna Snuggle can easily
sit near the top of many hip hop heads list for album of the year.