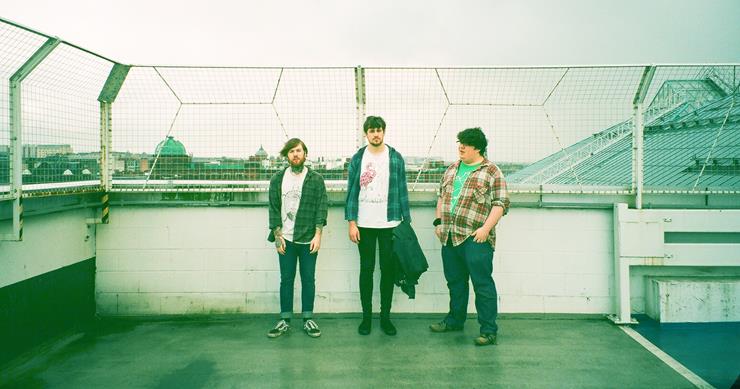 With their album Omphalic recently released through Struggletown Records, Algernon Doll premieres the video for “Sweet Nothing”, an animated collage by Chloe Turner. As frontman Ewan Grant has expanded his vision to a trio while honing in on the ’90s alternative affectations with a little help from Shellac’s Bob Weston—plenty of buzz has been circulating through the pipelines about Algernon Doll preparing to record their upcoming follow up with the producer who needs little to no introduction; the great Steve Albini.

Here in the living still-life, vintage video pastiche, Chloe Turner turns Algernon Doll’s sound of “Sweet Nothing” into a free-play animated set of intersecting retro ads and arts. Landscapes of trees, highways, mountains, lakes, pools, and streams get Mod Podge’d with spliced images of vacationers, adventurers, and others. The scale, size, and blending of images creates an alternate world of giant babies, nuns, to random characters that interfere and interact with the cut-and-paste selection of settings ripped straight out of your great-grandma’s hoarded magazine stockpile. Turner’s video jogs all the switches that turn time inside out, where Ewan’s retro-vertigo reverences found on “Sweet Nothing” are displayed like a moving modern art gallery display that makes the entire twentieth century feel like they were defined by the 80s and 90s undergrounds. For more on this and thoughts on the upcoming opportunity to record the next Algernon Doll album with Steve Albini, we give you our recent conversation with Ewan Grant:

What sorts of ephemeral items lead to the creation of the single, “Sweet Nothing”, and accompanying animated visual?

Well, I didn’t make the video but I can only assume Chloe Turner uses a mixture of photographs and/or witchcraft/magic. As far as musically, it’s a product of coffee granules, duct tape and skateboards. It’s a chord progression I had when I was 16/17 so youth is ephemeral I guess.

Describe for us the making of the album Omphalic, and how it was different from writing and recording your previous records.

With this record I wrote every song bar on the night before recording. It wasn’t my initial plan but I think everything came out a lot more honest. Music is best when you don’t over-analyze it and I think this way, I was more excited about the songs as they were so fresh and that comes across in the recordings.

Myself and Tom did a lot of skateboarding when the sun was out and then recording when it got too dark so it was a really great time, very relaxed.

As you prepare to record with Steve Albini this fall, what are you looking forward to with this experience, and what are some of the various goals and accomplishments that you have in mind for these forthcoming sessions, and more?

Our goal is to get a very real representation of the songs and where we are as a band. We’re doing it all live and on tape so we won’t be changing any sections or fixing any mistakes. Recording with Albini has been a dream of mine for as long as I can remember so it’s definitely upped my song-writing. We’re away out on tour to road test all the songs so they’re all
pretty tight before going to Chicago.

Our goal is to make the least perfect but most admirable punk rock record and take it to the US moving forward. The response in North America has been very positive so we’re aiming to do some big tours over there to spread the word.