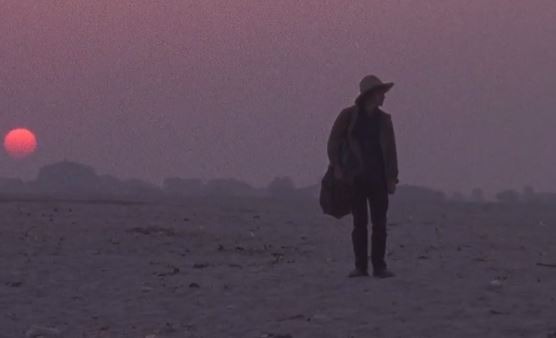 Bill Baird strikes us as the sort of guy who can stumble into a major label record deal or stumble into altercations with Megadeth's manager as easily as he could stumble into being the focus of a film based in India. The video for his track "Waited My Whole Life To Disappear", off Diamond Eyepatch, is one of those scenarios in which Bill was supposed to play a supporting role and wound up being the central figure in the film. As a companion to the footage shot, the "Waited My Whole Life To Disappear" came together from his travels, as being a westerner, wandering and wide-eyed, in a foreign land that inspired his nine minute freak out jam. I caught up with Bill via email to get the full story on his travels.

I was given little information regarding the back story to the video, so my first question is quite forward: What the hell were you doing in India, Bill?

I was there for a month making a film entitled "The Origin of Sound."

It's a sometimes psychedelic, sometimes confusing, sometimes earnest, sometimes enlightening examination of the concept of Nada Brahma by an awkward westerner (me). The whole project was a collaboration between myself and my friend Tomer Gendler, who directed the movie. I basically walk around in awe and confused for a couple of months, trying to wrap my head around such a fantastic deep culture. I wrote and recorded hours of original music for the film.

Nada Brahma translates to mean "the world is sound." In that school of thought, everything is sound, and if one can tune the mind properly, all sounds are music. There is no "noise." It is a really beautiful way of looking at the world. I perhaps was not worthy to even be looking at something so profound. My sonic world is often the sound of a bag of corn chips popping open.

Tomer (the director)… his original idea was to film a documentary about bhang lassi. It's a type of hashish yogurt drink consumed during the Shivarotri—night of Shiva. I did drink some and it was pretty crazy. But the documentary widened in scope from our initial conversations. We discussed the use of drone in Indian music and I went from being the sound guy to the focus of the documentary! And so the film is my weird journey, but it's actually not really about me at all. I'm kind of like the everyman westerner searcher guy. Most of my personal thoughts and individual characteristics are wiped away in the film. Which is good and bad. It's really hard to watch yourself on a big screen.

The film was sponsored by Air India, the national airline. They provided all our travel in exchange for the rights to screen the film on their flights. I'm not sure what's happened with that; for all I know, kids traveling from Delhi to Bangalore to say hi to grandma might be subjected to seeing a film of some weird blonde guy walking around dumbstruck, an analog reel-ro-reel recorder under his arm.

I think Fuji Film also provided the film. It was shot in all 16mm. 16mm film grain suits the quality of the air, especially in Varanasi. I swear, the air just looks different there. It holds the light a different way. Perhaps all the dust.

Never travel in India with 16mm film, though, if you don't have to… every train station and airport you pass through, there's multiple men with machine guns wearing berets manning x-ray machines (which the film cannot go through). Every time we saw a beret man with a machine gun and had to pass through his x-ray station, it was a several hour long negotiation.

This journey to India was the first time, as an adult, that I shat my pants. That was an awkward day. Mostly because, post-accident, I had to walk two miles back to my guest house.

There's a scene in which you're playing sitar. Are you relatively familiar with the instrument? Played it much before? Tell me more about that experience in particular and the gentlemen who is accompanying you on drums.

I have only a little familiarity with the sitar. I've played it before, but mostly just picking out notes for recordings. In that scene, I was in a really, really small music school taking a sitar lesson. I say really, really small because I was the only student. The music school had no doors, which I thought was cool. The guy just slept there on the ground. He took a selfie with me on his weird old cell phone.

As far as what I was playing, it wasn't exactly Ravi Shankar. Basically, I was going up and down the major scale for about an hour.

Given the title and the traveler's anonymity of the video syncing so well, what came first, the song or the trip?

The trip came first. The song sprung directly out of the trip.

What was the festival you attended?

I mentioned this earlier—it's called the Shivarotri. Basically, hundreds of thousands of men drink bhang lassi and dance in the streets. It was a little surreal. Very few women around. There's faux bumping and grinding dancing going on, along with more solemn stuff happening.

I decked out a little motorcycle but crashed it. It had a giant speaker horn on it attached to my iPod. I then caught a ride up the mountain with my friend Paul Mathieu. He's a sculptor who lives a pretty magical life in Udaipur. He restored an old building using traditional methods—the walls are made of coconut meat. Fragrant. Some straight-up William S. Burroughs expatriate style stuff. Flowing curtains (no windows), sculptures, glasses of wine, flying kites on the roof.

Tomer and the film's producer met with the prince of the town we were staying in—Udaipur. He gave us special permission to walk in the area reserved for women. It's a protected area. So I got to walk around by the decree of the prince. That almost sounds good enough to put on my resumé.

There were many policeman at the festival using batons liberally—whacking people who stepped out of line. Folks lining up to see the shiva shrine were in this bizarre enclosure that looked to me like cattle being led into the slaughter house. Looked like a trampling hazard. Maybe that's the bhang lassi talking. The policemen stared at me and whacked their batons in their hands and made mean looking faces.

It was a 10-mile trek up into the mountains. All along the way, the sides of the valley were lit with small campfires. Some people had traveled on foot for weeks for the pilgrimage. Like a lot of my time in India, it was beyond all bounds—both solemn and moving and also absurd.

At the final temple area, there was a massive sound system that was severely broken. A very very loud buzzing ground hum was running through the speakers. I think the speakers were there for celebration, or to play music, but they only contributed to the truly bizarre nature of the proceedings. Again, perhaps the bhang lassi talking.

I did get in the enclosure for the final run through to see the Shiva statue. I was pretty zonked but I recall seeing a minuscule statue for about a half second before being shoved out of the way. And to think some people traveled for weeks just for that half-second glimpse of the sacred statue. Belief is a strange and beautiful thing.

Did you and the director work closely on the vision for "Waited My Whole Life To Disappear"? Was the concept always to screen it in reverse?

That was Tomer's idea. For the video, the concept was basically create an encapsulated version of the entire trip. The ending coda section feels the most like the journey to me.

What lingering affects have stuck with you since traveling to India?

I had a dream one night in an ashram in the Himalayas. There were millions of people all gathered by the Ganges River, all talking at once. In my dream I started floating above all of them. I could hear all the voices but they gradually merged into a single tone that encapsulated all human sound.

Then I drew further back and the entire earth was emanating a single tone that encapsulated all earthly sound.

And so forth. As I drew further and further back, other planetary tones chimed in, and the further back I went the more the tone became all-consuming.

I kept drawing back and back faster and faster and the sounds whizzed by. I woke with a start, still hearing the buzzing all consuming vibration. "This is AUM!" I told myself. I'm not sure if I was right, but it was a very very vivid dream. That moment of waking lingers strongest in my memory.

I also had a crazy waking dream where I had a conversation with my shadow. My shadow looked exactly like the Shiva statues all around India. It was me but also Shiva somehow. I was partially asleep but could still see the room around me. My shadow stepped out from the shadow behind the door. My shadow told me, "Don't take me for granted."

What else has lingered?

I have a really nice collection of shirts I bought for super cheap at the state textile shop. I also had a pale linen suit tailored for me. I have many music recordings based on the journey yet to be released.

I have a weird feeling of displacement here in the states sometimes. Upon returning to the US, everything felt really boring and plain and empty and lacking in life and color and smell.

I can't shake that feeling of displacement, but I guess I've always had that. Probably the reason I started making music.

Feeling alone in a crowd, you know that feeling? Doesn't feel as relevant in India.

Bill Baird's Diamond Eyepatch is out now on Moon Glyph.