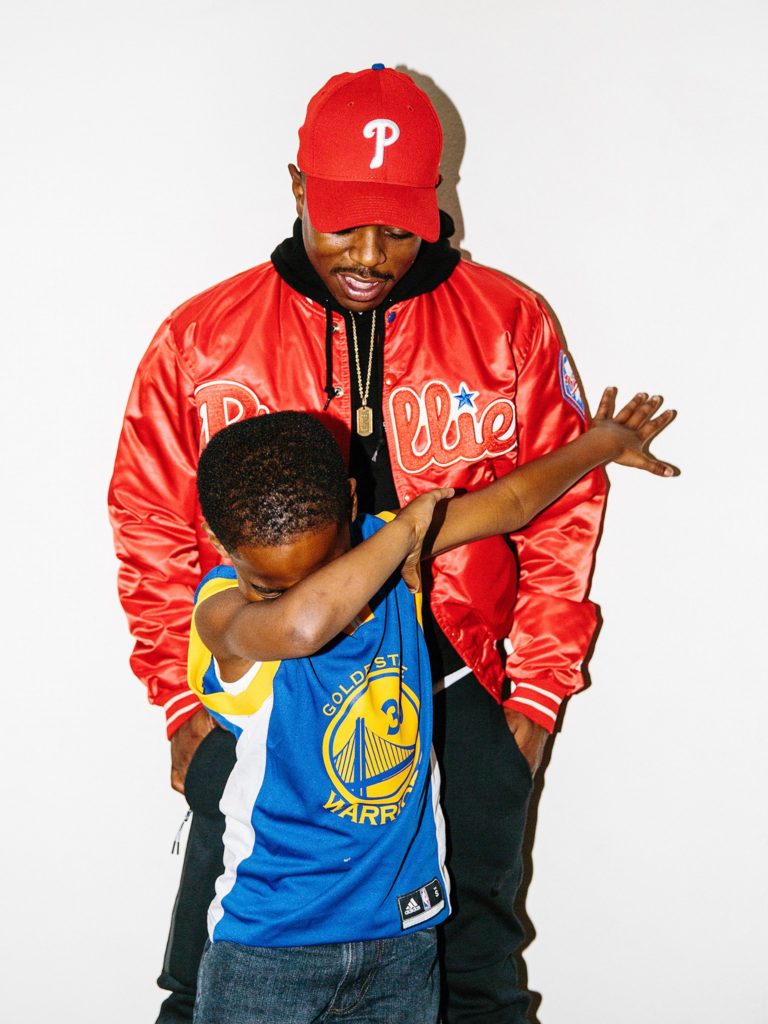 On October 27th, 2016, Compton-based rapper and Interscope Records signee Boogie released the Gina Gammell and Riley Keough-directed video for “Nigga Needs”, a somber piece from his 2016 mixtape Thirst 48 Pt. 2. In just over a week it collected over 130,000 views, punching higher than the majority of his previously released content. In it, he embodies two figures on display in what appears to be art gallery, being observed by an assembly not unlike you’d find in many art galleries – erudite, blankly perplexed, and exclusively white. While one of the figures is already in position, sporting a black eye and holding a sleeping child, the other begins the video gazing at his platform, donning a Budweiser hat (timely in its prominent display of the beer’s recently adopted name, “America”), and carrying a fresh bullet wound to the left of his abdomen, blood having stained his white tee shirt and freely running down his jeans. With his time running out, his foregone decision looms heavily. The climb is light work but the price is steep, and he’s come to atone.

The 26-year-old emcee, born Anthony Dixson, posits firmly within a West Coast renaissance that includes artists Kendrick Lamar and Vince Staples, who carry pedigrees in both their respective neighborhoods and the recording booth. Like those two artists, Boogie offers a complex take on what being Black looks and feels like in modern-day America. Lamar found his stride in the rich history of African-American music and entertainment, using soul, jazz, funk, and blues to embolden his narrative of self-love by way of devout introspection, while Staples frequently calls back to his reverence for punk and hardcore ideologies, an evident guide to his nihilistic and, at times, perversely comical read of the North Long Beach of his lost youth. Kendrick finds his transcendence from within, assuming the role of his generation’s owl-eyed shaman; Vince eagerly embraces the temperament of an anti-hero, someone with a growing intolerance for hip hop’s tropes and transgressions, while maintaining an acerbic, writerly focus in his output. Where the circumstances of Boogie’s life may have matured him at an early age, he moves nimbly through his warm, familiar compositions, his easy lisp and gospel background giving his natural gifts for rhyme and melody a conversational flair. As the purview of his California peers continues to widen, Boogie remains ten toes down, mired in the everyday tribulations of his beloved Compton.

With his video for “Nigga Needs”, he joins Lamar and Staples, among others, in a running dialogue about mainstream America’s voyeuristic gaze toward hip hop and its practitioners, whose music is often prejudged and summarily dismissed, even as its saturation is proving impossible to ignore. In Lamar’s video for the Grammy Award-winning single “Alright”, his surreal and jubilant performance is cut down by a police officer’s bullet, whose chosen weapon is his right hand in mimic of a handgun; Staples’ video for “Señorita” is a stage set for a dystopian warzone right in the middle of a residential neighborhood, concluding with a family who have watching bodies drop from behind a glass, smiling and embracing each other, their oblivion uninterrupted.

As much these clips present as white-knuckled indictments of an increasingly desensitized viewership, they also grant the viewer an opportunity to immerse in the shape and substance, the very fiber of the artists’ psyches, as well as giving a more fully dimensional read of the world(s) they indignantly and arduously assemble with the written word; one part rebuttal to the hastily edited clips showcasing police officers assaulting and murdering unarmed citizens shown ad nauseam on the nightly news, another part reaffirmation of what the human spirit is capable of even under systemic duress.

In “Alright”, after Kendrick absorbs a violent landing from having been shot, he opens his eyes ever-so-slightly and he offers a knowing smile, undergirding the song’s theme independent of his personal fate. A tattoo-heavy central character in “Señorita” glares at the aforementioned family from behind a thick pane of glass, putting forth a singularly violent temperament, where moments prior he was leading a death march, purposefully intoning the Future-sampling hook, with a formally-bound text above his head. “Needs” delves even deeper, with Boogie rattling off a long list of vices and personal trappings with both hubris and exasperation, in total awareness of his flaws without giving an inch of his dignity. He weaves a voice mail message from his mother into the end of the song and practically dares the viewer to unlock from his gaze, to detach from his mortality. He has a history with gangbanging and is an IRL shooting victim – he’s also a beloved son, an involved father, and a member of a vibrant and resilient community that he wants to provide a better example for. His refusal to flinch from his many truths speaks to the depth of his character and all but assures his future in bettering the lives of those who know him best. With views for “Needs” now sitting just above 390,000 views and in the middle of a nationwide tour with South Florida stalwart Denzel Curry, it appears that his impact may extend even further than he anticipates.