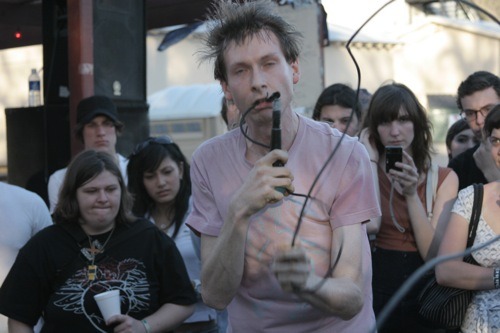 n. pl. hip·pies An ever-evolving breed whose relevance fades in and out of the American landscape depending on the mainstream's pessimism with its own affairs. When shit's breezy, the hippy's a caricature off getting wasted at Burning Man. When shit's hitting the fan, though, liberation-seeking types in loose-fitting clothes can emerge at the forefront of a new hope, like Luke Skywalker right before he realizes he can't bang his sister.

In the midst of today's volatile terrain, “a volcanic desire for togetherness”, claims the writers of Lucky Dragons' press release, is upon all of us. At this point, the shit storm that's been hitting the proverbial fan's gotten so heavy that many Americans rightly fear we're headed to the sewer. Calls for togetherness, hopes for liberation: these are no longer bumper stickers for political action mumbled amidst a fog of pot smoke. (Well, they might be that too.) They're also not gestures proffered up to substantiate substance-less trends, like naming a band after a former conflict in Southeast Asia and growing your hair long. Lucky Dragon's music is actually one of a group of new, optimistic electronic song experimentalists who arguably make revolutionary sounds. Or, in their words, “you could call it post-noise, or post-anything you like, but we would prefer to call it pre-something.”

If there is a trend with which Lucky Dragon share airspace, it's a new positivity that has arisen reflexively against one of the dumber notions of the past few years, that “irony” is not an inherent facet of the human experience, but an actual cultural phenomenon that manifests itself in snarky t-shirts and faggy moustaches. I think sometime after 9/11, people decided that irony had died. This prediction was right up there with WMDs and imminent chemical and nuclear attacks. (What ever happened to anthrax?) While I wouldn't want to confuse GQ trendspotting with Bush's lies, it's just as easy to reduce our understanding of our social landscape as it is to simplify, and by extension, delude, our political landscape. Has all this shit left us culturally starved? Maybe. Why is this relevant to Lucky Dragons? Cuz Lucky Dragons are fresh. Fresh, and also hostile to the tendencies to reduce and define that allow for people to buy into the ideas of trends and genres and …wars?

Heavy. I digress. All we're saying… Give Lucky Dragons a chance. They're an eight year project dating back to 2000 and in that span of time, they've offered up 18 releases in virtually ever format, relatively unhinged from anything remotely trendy. It just so happens that as of late, people seem to need hippies. Just ask the Whitney Biennial. Do you need hippies too? Try them out. They still play bongos and hold hands, after all, though now these bongos are warped through a digital strainer, and instead of holding hands around a fire, we hold onto one of those delicate little noise-making nodes on Lucky Dragons' homemade sound toys:

There's a new album on the horizon for Lucky Dragons called Dream Island Laughing Language out on Marriage Records on May 8. Marriage also recently re-released the 2002 LP-length CD Dark Falcon, which offers up choppier, more bit-conscious stuff. You wont lose with either. This is highly conscious stuff.